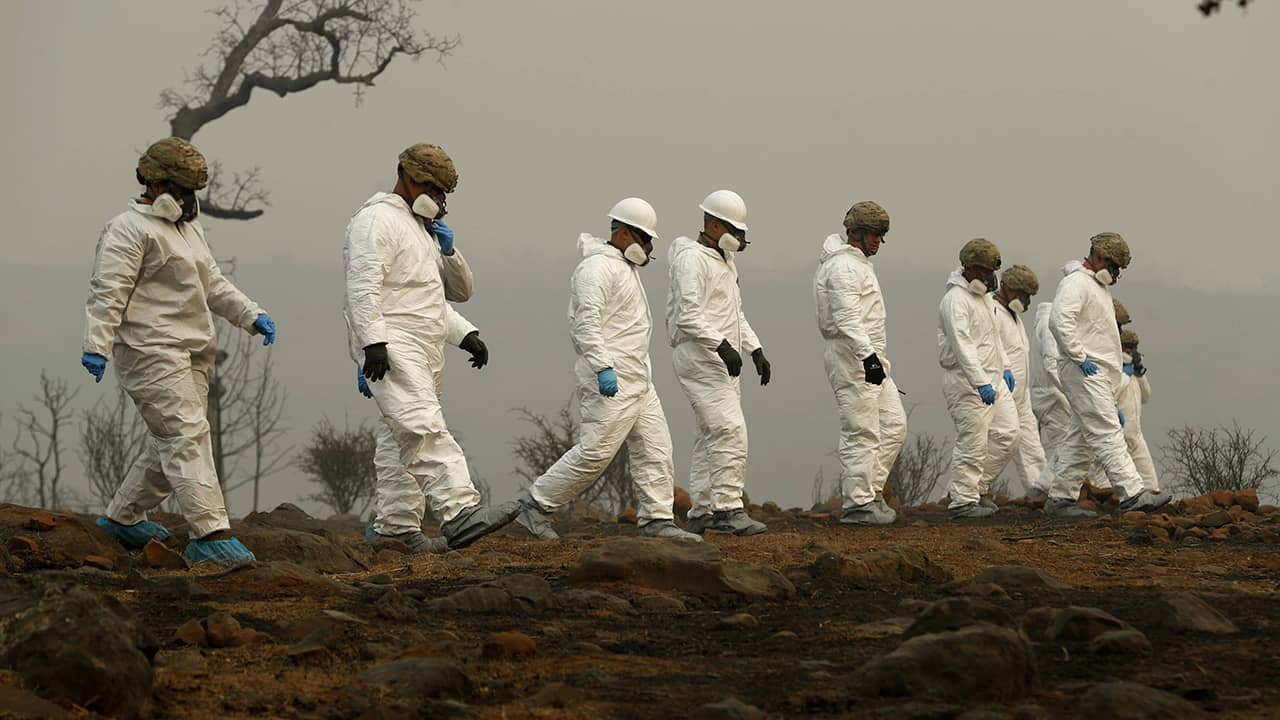 PARADISE — With scores of people still missing, National Guard troops searched Wednesday through charred debris for more victims of California’s deadliest wildfire as top federal and state officials toured the ruins of a community completely destroyed by the flames.

“Now is not the time to point fingers. There are lots of reasons these catastrophic fires are happening.” — Interior Secretary Ryan Zinke

Interior Secretary Ryan Zinke joined Gov. Jerry Brown on a visit to the leveled town of Paradise, telling reporters it was the worst fire devastation he had ever seen.

“Now is not the time to point fingers,” Zinke said. “There are lots of reasons these catastrophic fires are happening.”

“This is so devastating that I don’t really have the words to describe it,” Brown said, saying officials would need to learn how to better prevent fires from becoming so deadly.

About 7,700 homes were destroyed when flames hit Paradise, a former gold-mining camp popular with retirees, on Nov. 8, killing at least 48 people in California’s deadliest wildfire. There were also three fatalities from separate blazes in Southern California.

“The infrastructure is basically a total rebuild at this point. You’re not going to be able to rebuild Paradise the way it was.” — FEMA’s Brock Long

It will take years to rebuild the town of 27,000, if people decide that’s what should be done, said Brock Long, administrator of the Federal Emergency Management Agency. The town in the foothills of the Sierra Nevada Mountains looks like a wasteland.

“The infrastructure is basically a total rebuild at this point,” Long said. “You’re not going to be able to rebuild Paradise the way it was.”

Temporary schools and hospitals will be brought in, Long said. Officials are also looking to bring in mobile homes for thousands of people left homeless.

Debris removal in Paradise and outlying communities will have to wait until the search for victims finishes, he said. 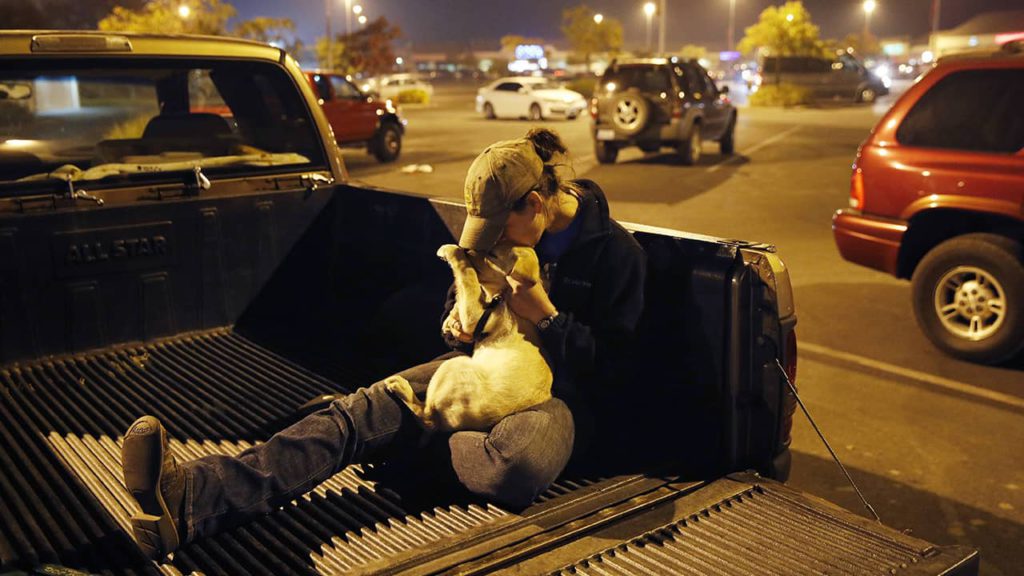 Sarah Gronseth kisses her dog Branch in the bed of a truck in a parking lot, Tuesday, Nov. 13, 2018, in Chico. Gronseth, a teacher, evacuated some of her high school students in her truck as the fire bore down on the high school in Paradise. She lost her home in the fire. (AP Photo/John Locher)

On one street, ash and dust flew up as roughly 20 National Guard members wearing white jumpsuits, helmets and breathing masks lifted giant heaps of bent and burned metal, in what was left of a home. Pink and blue chalk drawings of a cat and a flower remained on the driveway, near a scorched toy truck.

The soldiers targeted homes of the missing. If anything resembling human remains is found, a coroner takes over.

After the soldiers finished at the site, a chaplain huddled with them in prayer.

The number of missing is “fluctuating every day” as people are located or remains are found, said Steve Collins, a deputy with the Butte County Sheriff’s Department.

Many Seniors Are Missing

Authorities on Wednesday released the names of about 100 people who are still missing, including many in their 80s and 90s, and dozens more could still be unaccounted for. Sheriff’s department spokeswoman Megan McMann said the list was incomplete because detectives were concerned they would be overwhelmed with calls from relatives if the entire list were released.

“We can’t release them all at once,” McMann said. “So they are releasing the names in batches.”

Authorities have not updated the total number of missing since Sunday, when 228 people were unaccounted for.

Our lights will shine in California’s state colors, blue and gold, with an EMS siren in the halo in sympathy for the victims and those affected by the California wildfires. pic.twitter.com/fvr1ZFZQxU

Sol Bechtold’s 75-year-old mother was not on the list. Her house burned down along with the rest of her neighborhood in Magalia, a community just north of Paradise.

“The list they published is missing a lot of names,” Bechtold said. His mother was a widow who lived alone and did not drive.

To speed up identification of remains, officials are using portable devices that can identify someone’s genetic material in a couple of hours, rather than days or weeks.

More than a dozen people who were trapped by a wall of fire as they tried to escape the inferno survived by plunging into a cold lake.

People Plunged into Chilly Reservoir to Save Themselves

The San Francisco Chronicle reported Wednesday that a family of four and their 90-year-old neighbor, along with their pets, plunged into the chilly Concow Reservoir after the roaring fire surrounded their homes.

One of the family members told the newspaper that they stood in shoulder-deep water as flames singed the vegetation on the shore behind them. Not far away, at least a dozen others rushed into the lake after the caravan of vehicles they were in was cut off by flames.

Before the Paradise tragedy, the deadliest single fire on record in California was a 1933 blaze in Griffith Park in Los Angeles that killed 29.

The cause of the fires remained under investigation, but they broke out around the time and place that two utilities reported equipment trouble.

People who lost homes in the Northern California blaze sued Pacific Gas & Electric Co. on Tuesday, accusing the utility of negligence and blaming it for the fire. An email to PG&E was not returned. 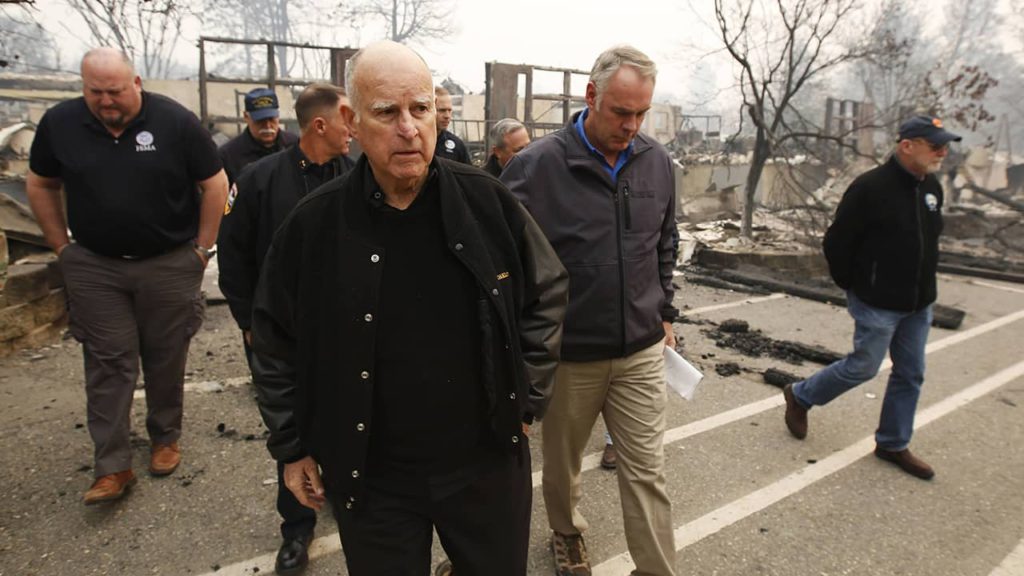 California Gov. Jerry Brown, center, and Interior Secretary Ryan Zinke, second from right, tour the fire ravaged Paradise Elementary School Wednesday, Nov. 14, 2018, in Paradise. The school is among the thousands of homes and businesses destroyed along with dozens of lives lost when the fire burned through the area last week. (AP Photo/Rich Pedroncelli)

Because of ’17 Law, Bulldogs Use Auxiliary Funds to Play in Texas