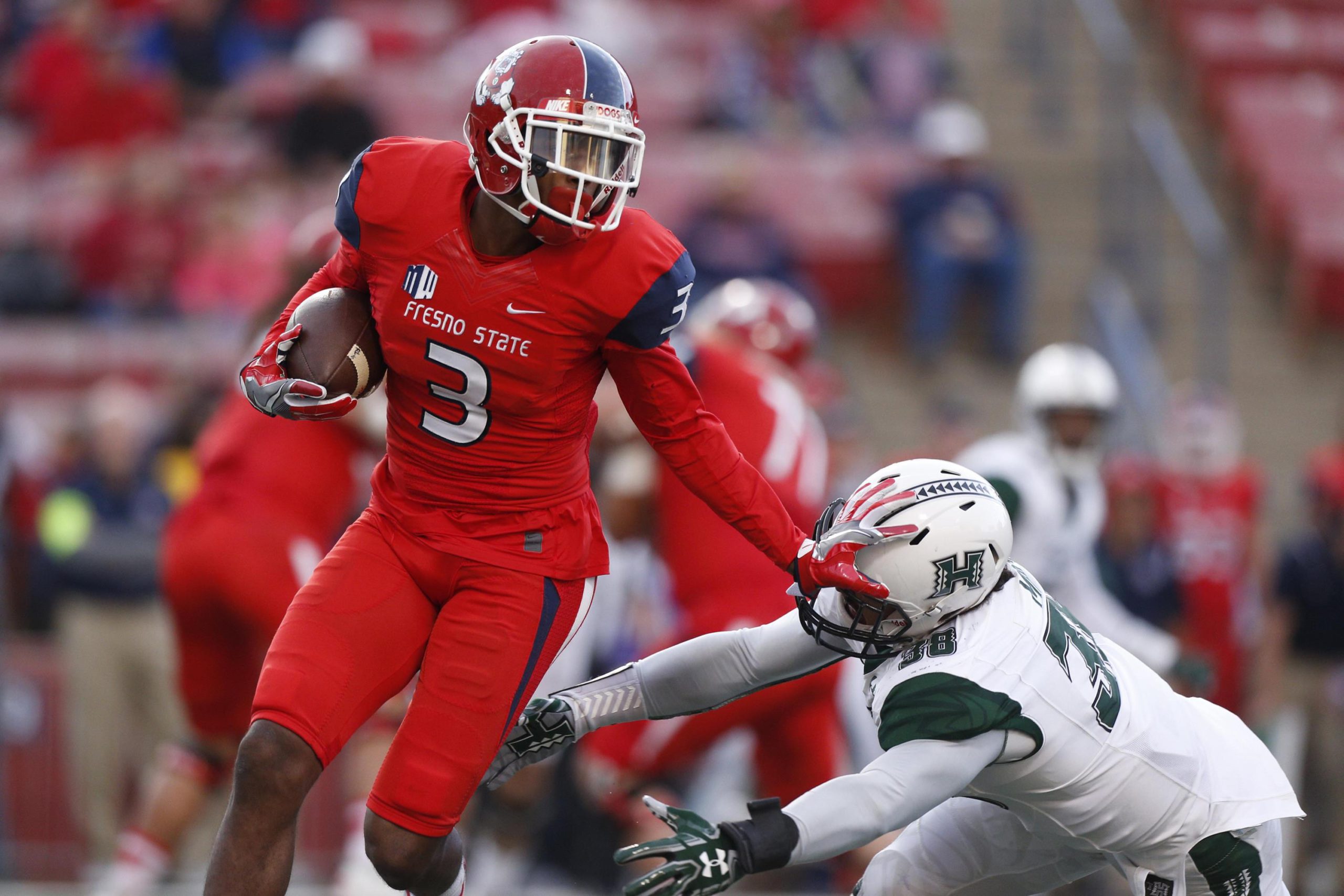 Marcus McMaryion threw for 284 yards and four touchdowns and Fresno State blew it open before halftime to beat Hawaii 50-20 Saturday night.
Following a power outage that delayed the game roughly 30 minutes not long after the contest started, Fresno State lit it up in the second quarter scoring 23 points en route to a 37-13 halftime lead.

Fresno State senior wide receiver KeeSean Johnson matched his season-high with eight receptions and had his fourth 100-yard receiving game of the season, finishing with a team-high 102 yards.
With his final reception of the night, Johnson became the school’s all-time receptions leader with 234. He eclipsed current Green Bay Packer star and former Bulldog Davante Adams (2012-13).

“This is well deserved, he has had a great career here,” Bulldogs Coach Jeff Tedford said of Johnson. “It was nice that he could get it done at home. It was nice to see him get it, it is very well deserved. He works really, really hard and he is a great teammate. I am really proud of him.”
Ronnie Rivers led the Fresno State ground attack with 10 carries for a career-high 125 yards, including a 76-yard romp early in the second quarter.
Just before halftime, Hawaii’s Ryan Meskell attempted a 53-yard yard field goal that fell short as time expired. However, Fresno State’s Jamire Jordan fielded the ball at the goal line and ran it back 100 yards for the 24-point lead.

Bulldogs Ranked No. 20 by AP

With the victory, the Bulldogs improved to 7-1 overall and 4-0 in the Mountain West Conference. They lead with West Division by one game over San Diego State, which is 3-1 and 6-2 overall.
On Sunday morning, Fresno State vaulted into the No. 20 spot in the Associated Press Poll. In addition, they are ranked No. 23 in the Amway Top 25 Coaches Poll.
Mountain West rival Utah State moved into the AP rankings at No. 18 and is No. 20 in the coaches poll.
The Aggies lead the Mountain Division at 4-0 and are also 7-1 this season.
There was a big shuffle in the bottom of the rankings after a season-high 11 AP ranked teams lost this weekend.
The top of the ranking was mostly unchanged. No. 1 Alabama, No. 4 LSU, and No. 5 Michigan were idle. No. 2 Clemson and No. 3 Notre Dame won easily.
The College Football Playoff selection committee releases its first ranking of the season on Tuesday.

Walker Does It All on Defense

Junior defensive end Mykal Walker had a team-high nine tackles, six solo, 3.5 tackles for loss, one sack, and a fumble recovery for Fresno State.
Junior free safety Juju Hughes made his second interception of the year, giving Fresno State 14 for the season. The Bulldogs have 20 turnovers in all during the campaign.
Cole McDonald led Hawaii (6-4, 3-2) with 225 yards passing.