McMaryion Is 'McMarvelous' in Bulldogs' Body Slam of Toledo 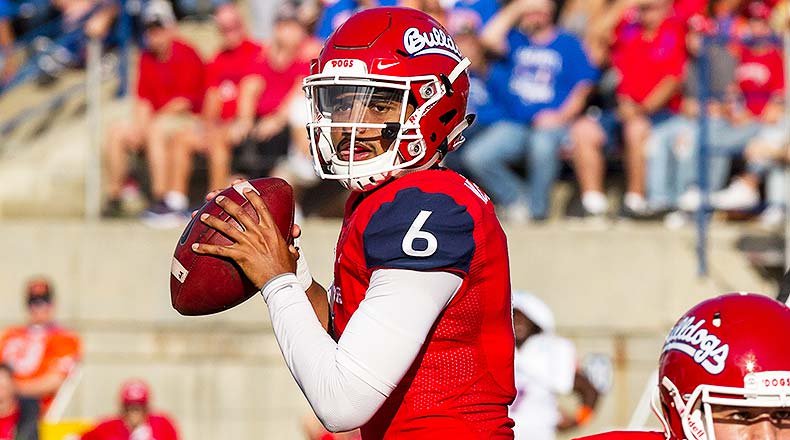 Marcus McMaryion passed for 368 yards and accounted for five touchdowns and Fresno State scored 42 consecutive points as the Bulldogs beat Toledo 49-27 on Saturday night.
McMaryion was 24-of-31 passing with four touchdowns and an interception. His 6-yard scoring run gave Fresno State (3-1) a 49-13 lead late in the third quarter. He finished the game with a passing efficiency rating of 213.3. And it was the second consecutive game that he had accounted for five touchdowns — matching his production in Fresno State’s 38-14 victory at UCLA.

Most Passing Yards in a Game Since Derek Carr in 2013

McMaryion’s 368 passing yards were the most for a Fresno State quarterback since Derek Carr passed for 404 against Utah State in 2013.
“It’s a good feeling because Toledo is a great team. We played well on both sides of the ball. We had a good game plan going into tonight’s game, and we executed it well,” McMaryion said. “Every defense has its holes and our coaches do a great job of putting us in a good position to be successful in every game.”
Said Fresno State Coach Jeff Tedford: “Marcus was spot on. I thought he was very efficient tonight, especially with some balls downfield. He managed the game really, really well. And he was very accurate.”
The Bulldogs (3-1) open Mountain West play next Saturday at Nevada (3-2, 1-0 MW) at 7:30 p.m. The game will be broadcast by ESPNU.
Jordan Mims had 15 carries for 59 yards and a score to go with career-highs of six receptions and 126 yards receiving, including a 47-yard touchdown catch-and-run in the second quarter for Fresno State. KeeSean Johnson finished with six receptions for 102 yards and two TDs.
Jameson Vest hit back-to-back field goals of 46 and 43 yards to give Toledo (2-2) a 13-7 lead with 10:22 left in the second quarter. Johnson’s 7-yard touchdown catch fewer than two minutes later gave Fresno State the lead for good. The Rockets went three-and-out on each of their next three possessions and Mims’ scoring run made it 28-13 at the break.

McMaryion capped the opening drive of the second half with a 12-yard touchdown pass to Johnson and Mykal Walker’s 38-yard pick-six made it 42-13 with 10:22 left in the third quarter.
The Bulldogs’ defense was stout, too, finishing with five sacks and nine tackles behind the line of scrimmage. Walker, a defensive end, added a sack to his interception return for a touchdown, and linebacker George Helmuth recorded two sacks.

Carr Leans on Rookie Lessons to Get Past Raiders' Dismal Start