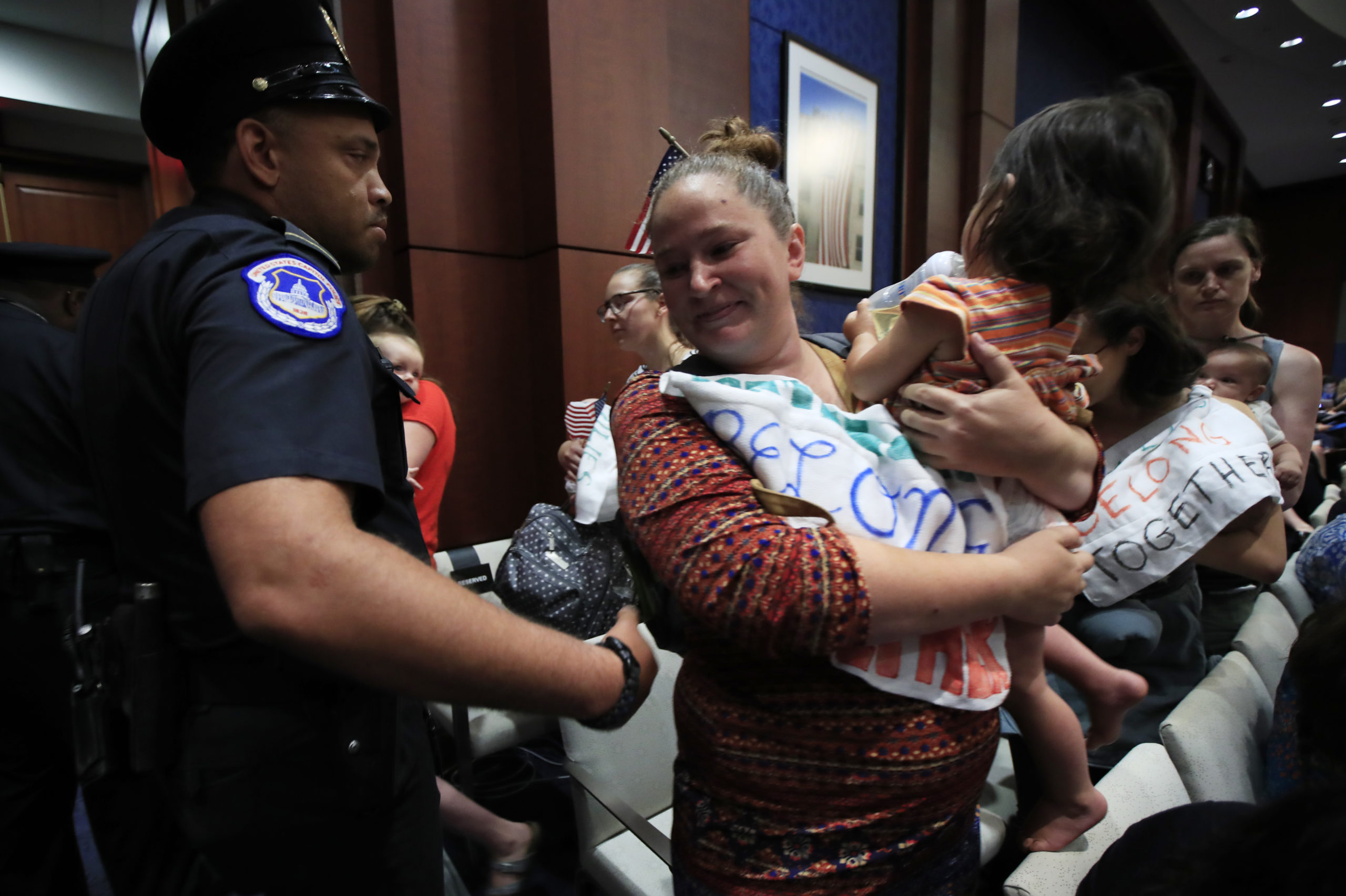 WASHINGTON — Republicans on Capitol Hill frantically searched on Tuesday for ways to end the administration’s policy of separating families after illegal border crossings, ahead of a visit from President Donald Trump to discuss broader immigration legislation.
Top conservatives, including key Trump allies, announced they were introducing bills to stop the practice amid a public outcry over the administration’s “zero tolerance” approach to illegal crossings. Sen. Ted Cruz of Texas introduced legislation that the White House said it was reviewing, and Rep. Mark Meadows of North Carolina, a leader of the conservative Freedom Caucus, also introduced a measure.
Both bills were offered as alternatives in case broader GOP immigration legislation heading for a vote this week fails, as is likely.
“This becomes a backup proposal,” Meadows told reporters at the White House.

Trump’s meeting late Tuesday with House Republicans comes as lawmakers in both parties are up in arms after days of news reports showing images of children being held at border facilities in cages and an audio recording of a young child pleading for his “Papa.”
The issue boiled over Tuesday at a House hearing on an unrelated subject when protesters with babies briefly shut down proceedings.
Maryland Rep. Elijah Cummings, the top Democrat on the House Oversight and Government Reform Committee, teared up as he pleaded with Republicans on the panel to end what he called “internment camps.”
“We need you, those children need you —and I am talking directly to my Republican colleagues— we need you to stand up to President Donald Trump,” he said.
Under the current policy, all unlawful crossings are referred for prosecution — a process that moves adults to the custody of the U.S. Marshals Service and sends many children to facilities run by the Department of Health and Human Services. Under the Obama administration, such families were usually referred for civil deportation proceedings, not requiring separation.

2,000 Children Separated in April and May

Nearly 2,000 children were separated from their families over a six-week period in April and May.
The House is already embroiled in an election-year struggle over immigration legislation that threatens to hurt Republicans in November.
Democrats have seized on the family separation issue. And now, Republicans are increasingly joining them in their call to stop separating families.
“While cases are pending, families should stay together,” tweeted Cruz, who is in an unexpectedly tough re-election battle. He introduced his own bill to speed up court proceedings to no more than 14 days. “Children belong with their families.”
Michigan Republican Rep. Fred Upton called for an immediate end to the “ugly and inhumane practice” of separation. “It’s never acceptable to use kids as bargaining chips in political process.” Kansas GOP Sen. Pat Roberts said he was “against using parental separation as a deterrent to illegal immigration.”

“The time is now for the White House to end the cruel, tragic separations of families,” said Sen. Lisa Murkowski, R-Alaska.
From afar, ailing Sen. John McCain, R-Ariz., tweeted, “The administration’s current family separation policy is an affront to the decency of the American people and contrary to principles and values upon which our nation was founded. The administration has the power to rescind this policy. It should do so now.”
The Trump administration insists the family separations are required under the law. But after signaling Monday that it would oppose any fix aimed solely at addressing that issue, the White House said Tuesday it was reviewing the emergency legislation being introduced by Cruz to keep migrant families together.
The senator’s bill would add more federal immigration judges, authorize new temporary shelters to house migrant families, speed the processing of asylum cases and require that families that cross the border illegally be kept together, absent criminal conduct or threats to the welfare of any children.
At a White House briefing Monday, Homeland Security Secretary Kirstjen Nielsen declared, “Congress alone can fix it.” That line has been echoed by others in the administration, including Trump, who has falsely blamed a law passed by Democrats for the “zero tolerance” approach to prosecutions of families crossing the border.

Outlook For Passage of GOP Immigration Bills Is Dim

Two immigration bills under consideration in the House could address the separations, but the outlook for passage is dim. Conservatives say the compromise legislation that GOP leaders helped negotiate with moderates is inadequate.
Rep. Jim Jordan, R-Ohio, a member of the Freedom Caucus, said he’s skeptical that even a full-throated endorsement from Trump will be enough to get the compromise bill through the House.
The compromise bill shifts away from the nation’s longtime preference for family immigration to a new system that prioritizes entry based on merits and skills. It beefs up border security, clamps down on illegal entries and reinforces other immigration laws.
To address the rise of families being separated at the border, the measure proposes keeping children in detention with their parents, undoing 2-decade-old rules that limit the time minors can be held in custody.
Rep. Bob Goodlatte R-Va., chairman of the Judiciary Committee, is reworking the family separation provision in the compromise bill, a GOP aide said Tuesday.
Faced with the prospect of gridlock in the House, senators appear willing to take matters into their own hands.
John Cornyn of Texas, the No. 2 Republican leader, said Senate Republicans are working on language to address the family separations that could receive a floor vote, potentially as part of a spending bill package.
“I don’t think the answer to family separation is to not enforce the law. I think the answer to family separation is: Don’t separate families while you’re enforcing the law,” Cornyn told reporters. “It’s all within our power, and people have to overcome their desire to preserve an issue to campaign on.”
GOP senators including Lindsey Graham of South Carolina, Jeff Flake of Arizona and Susan Collins of Maine also said they’ve been discussing family separation legislation.

The administration, meanwhile, is hoping to force Democrats to vote for the bills or bear some of the political cost in November’s midterm elections. Democrats brushed aside that pressure.
“As everyone who has looked at this agrees, this was done by the president, not Democrats. He can fix it tomorrow if he wants to, and if he doesn’t want to, he should own up to the fact that he’s doing it,” said Senate Democratic leader Chuck Schumer of New York.