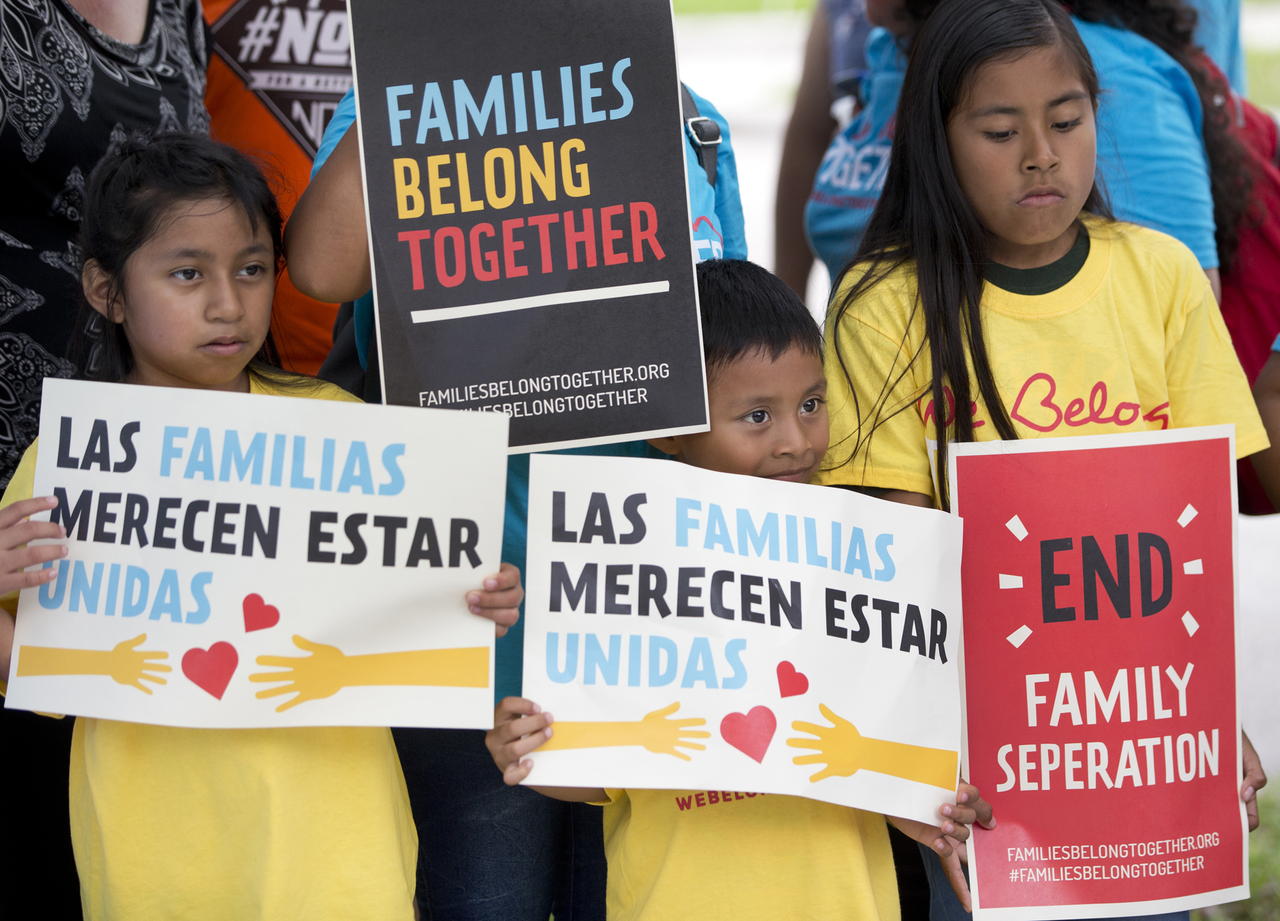 A defiant President Trump said Monday that he won’t allow the United States to become a “migrant camp.”
“Not on my watch,” the president added.

Democrats have turned up the pressure over the administration policy, and some Republicans have joined the chorus of criticism. Former first lady Laura Bush has called the separation policy “cruel” and “immoral” while GOP Sen. Susan Collins expressed concern about it and a former adviser to Trump questioned using the policy to pressure Democrats on immigration legislation.

Last week, The Washington Post reported that the Rev. Samuel Rodriguez, who delivered a prayer at Trump’s inauguration, signed a letter calling the practice “horrible.” Pastor Franklin Graham of Samaritan’s Purse, a vocal supporter of the president’s who has brushed aside past Trump controversies, called separating children from their parents “terrible” and “disgraceful.”
In addition, the Catholic Bishops and the Southern Baptist Convention issued statements criticizing the policy.
On Monday, Rep. David Valadao (R-Hanford) issued a statement saying “it is unacceptable to separate young children from their parents.”
Even some of the Fox News pundits who often lead cheers for Trump said that the president must end the “zero-tolerance” illegal entry policy of his Department of Justice.

‘Other Ways of Doing This’

Lawyer Alan Dershowitz, who is usually a friendly voice for Trump, had a forceful message for him Monday.
“You have to end this policy of separating parents from children,” Dershowitz said in an appearance on the president’s favorite morning show, “Fox & Friends.”
“(This policy) imposes a trauma on the children. It’s just unacceptable. It’s just not proper. There are other ways of doing this.”

.@AlanDersh to President Trump: You have to end this policy of separating parents from children – there are other ways of doing this pic.twitter.com/WzvT5311Lh

Valadao, who faces Democrat TJ Cox in the general election, urged passage of compromise legislation that would receive Trump’s approval.
“The substantial increase of minors at our southern border is both a humanitarian and national security crisis. While we must work towards a solution that reduces the occurrence of illegal border crossings, it is unacceptable to separate young children from their parents. This is exactly why passage of a compromise solution, such as that being discussed in Congress right now, is absolutely necessary,” Valadao said.
Last week, Rep. Jim Costa, D-Fresno, blasted the Trump administration’s treatment of families at the border in a speech on the House floor.
“This is an outrageous policy. I think it’s morally disgusting and un-American,” Costa said. “We are not a nation — in terms of our shared values — that tears families apart. … No one disputes that we need to secure our borders. We must ensure the safety of our nation. … But ripping these families apart like this is not securing our borders.”
Costa visited immigration detention facilities Monday in San Diego, along with fellow members of the Congressional Hispanic Caucus and House Minority Leader Nancy Pelosi. 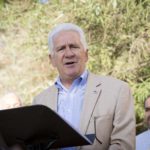 “This new policy of zero tolerance has 2,600 children being separated from their parents in the last six weeks,” Rep. Jim Costa (D-Fresno)  told The Fresno Bee on Monday night. “There could be 30,000 separated if it continues until August. That’s not the American way.”

“This new policy of zero tolerance has 2,600 children being separated from their parents in the last six weeks,” Costa told The Fresno Bee on Monday night. “There could be 30,000 separated if it continues until August.
“That’s not the American way.”
On Sunday, a group of congressional lawmakers visited an old warehouse in South Texas where hundreds of children are being held in cages created by metal fencing. One cage held 20 youngsters.
“Those kids inside who have been separated from their parents are already being traumatized,” said Democratic Sen. Jeff Merkley (D-Oregon). “It doesn’t matter whether the floor is swept and the bedsheets tucked in tight.”

Children Put in Cages Without Supervision

The Associated Press reported Monday that a teenager told an advocate that she had to teach kids at a U.S. Border Patrol facility in Texas how to change a young girl’s diaper after she was separated from her aunt.
Michelle Brane, director of migrant rights at the Women’s Refugee Commission, said the teenager told her the story Friday after the agency allowed her to spend several hours in the facility. 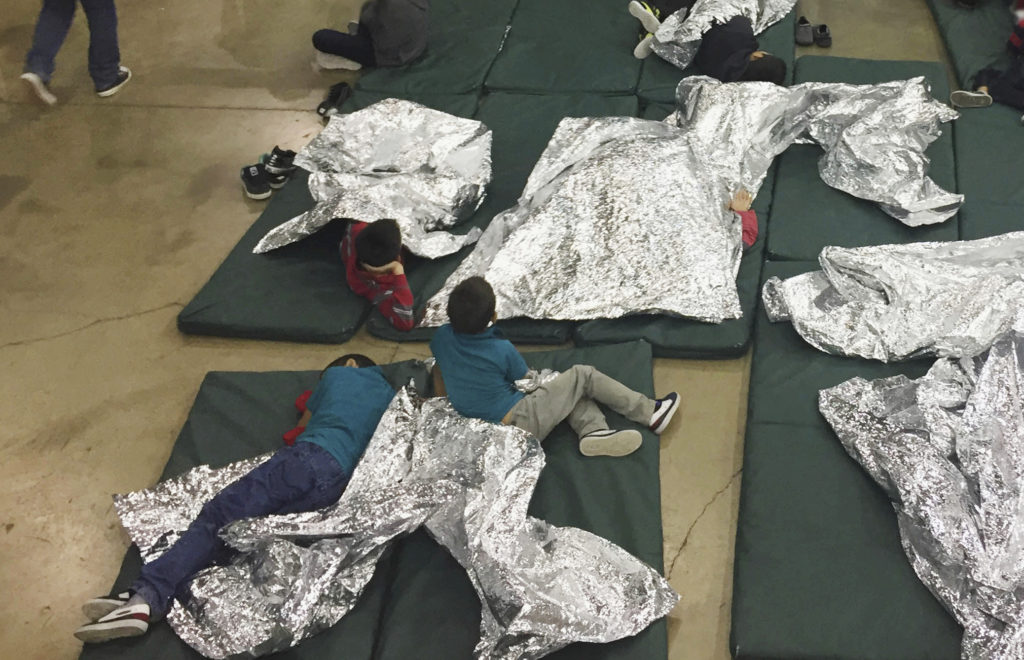 “She had to teach other kids in the cell to change her diaper,” Brane, who said she was deeply troubled over the story, told the AP.
Brane said the young girl had been ”so traumatized that she wasn’t talking,” and added that she “just curled up in a little ball.”
Brane also told the AP that she also saw Border Patrol officials scolding a group of 5-year-olds for playing in their cage, adding that the children also weren’t given any toys or books to occupy themselves.
“The government is literally taking kids away from their parents and leaving them in inappropriate conditions,” Brane said. “If a parent left a child in a cage with no supervision with other 5-year-olds, they’d be held accountable.”

President Stays on the Attack With Tweets

The trauma being inflicted on children and the loss of political support, however, does not appear to be making Trump have second thoughts.
Here are two of his tweets from Monday:

Children are being used by some of the worst criminals on earth as a means to enter our country. Has anyone been looking at the Crime taking place south of the border. It is historic, with some countries the most dangerous places in the world. Not going to happen in the U.S.

It is the Democrats fault for being weak and ineffective with Boarder Security and Crime. Tell them to start thinking about the people devastated by Crime coming from illegal immigration. Change the laws!