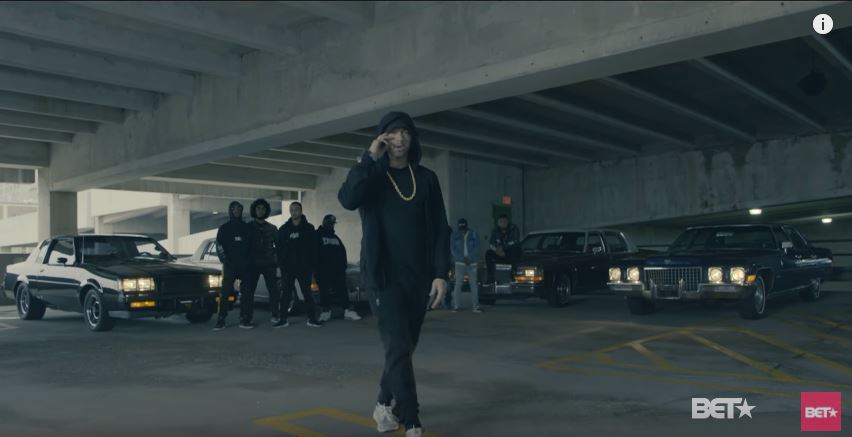 If you didn’t see the 2017 BET Hip Hop Awards, you have no need to worry. Today’s hottest trending video was from that night and is now on YouTube.
Eminem’s freestyle video blasts Trump for a little over 4-minutes and went up only 16-hours ago and has now reached over 6.1 million views on YouTube alone.
The American rapper and songwriter is known for his witty and comedic rap lyrics and was a best-selling artist in the 2000s.
Many users on YouTube retaliated on the rapper stumbling over his words, pausing mid-thought and for ripping Trump. Meanwhile,  celebrities and athletes praise him all over Twitter and YouTube for standing by their side.
But, his rap freestyle is — a freestyle. What you see is what you get.

Eminem is a well-known and an outstanding lyrical master. His album, The Slim Shady LP, was the first album I bought at Sam Goody in Fashion Fair and I continued to buy every album after that.
I understand he is putting his voice out there to insult Trump for his Twitter presidency, divisiveness and, no kidding, his unruly “orange tan.” Mostly he is trying to empower those whom Trump has scapegoated: immigrants, refugees and those who exercise their First Amendment right to protest.
But, my question is: How do we transform these lyrics and make them into a positive passage to finding resolutions?
Click here for full video. (Warning: Explicit language. But you already knew that.)
(Roe Borunda is a GV Wire videographer/photographer. You can contact her via Twitter, @roetography, and on Facebook.)

Roe's Video Pick: "Would You Chow Down on Crickets?"