Six Winter Storms Down, Three to Go: CA Reservoirs on the Rise. 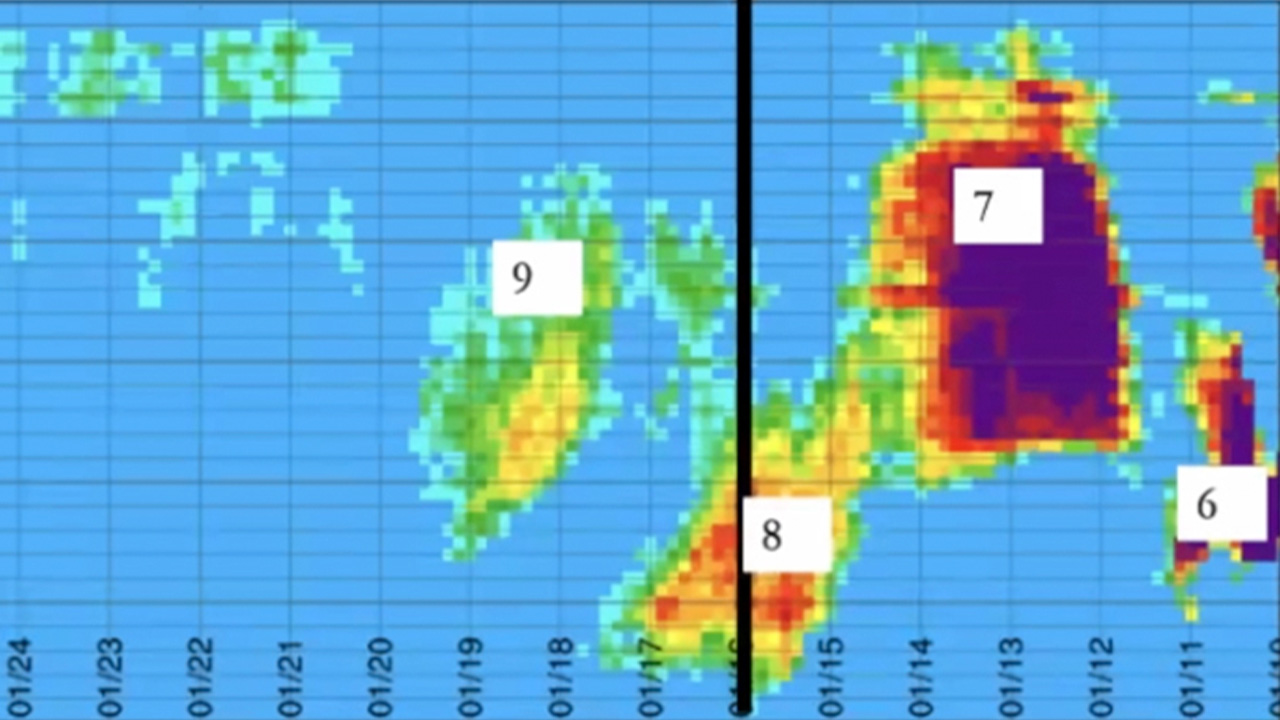 The seventh in a series of nine moisture-laden winter storms flowing in an atmospheric river coming off the Pacific is scheduled to hit California on Wednesday, but the Valley is getting a break — this storm’s fury is targeting Northern California and the Pacific Northwest.

The National Weather Service is forecasting less than a tenth of an inch of rain for Fresno on Wednesday, mixed rain and snow at Shaver Lake, and more rain and snow falling further north.

But the Valley is not out of the woods yet, state climatologist Michael Anderson told reporters in a briefing Tuesday afternoon.

Two more storms have formed in the Pacific, and No. 8 is scheduled to hit the Valley starting Friday afternoon.

By the time the storm ends Saturday night, Fresno could get as much as another 1.5 inches of rain, a foot and a half of snow at Shaver Lake, and another three feet of snow in the high Sierra, according to the National Weather Service.

Storm No. 9, which will hit Sunday night and continue until Monday night, could bring another inch of rain to Fresno and two feet of snow to Shaver Lake. That storm will be colder, hence increased snowfall at lower elevations, said Antoinette Serrato, a National Weather Service meteorologist in the Hanford office.

The impacts of this weekend’s storm will again raise the potential for localized flooding, mudslides, rockslides, and power outages.

Is the worst over yet? “There’s some uncertainty to that, and some of it deals with that storm No. 8,” Anderson said. “And we still don’t have enough intel on storm No. 9. And I think that the uncertainty of that leaves that question of ‘do things get worse before they get better’ kind of open.”

Anderson said that the forecasts call for the end of the current series of storms by Jan. 20.

Storm No. 9 could yet be followed by some precipitation but it’s likely to be minor compared to what has been falling in the series of nine storms, Serrato said.

“Everyone’s been talking about wanting rain and wanting rain, but this much at once, it makes flooding and damage impacts not great,” she said.

Fresno’s rainfall total was 8.23 inches as of Tuesday, less than 3 inches short of its October-September annual average of 10.99 inches, according to the National Oceanic and Atmospheric Administration.

As the rains eased Tuesday and early Wednesday, the city of Merced canceled evacuation orders for residents in the vicinity of Bear Creek, which had been choked with rainwater from Monday’s storm.

Riding along with @MercedFireDept . They’re using their Aircraft Rescue Firefighting rig to pull residents of the Willowbrook apartments to safety. This rig is typically stationed at the airport for aircraft rescue… It’s only been used one other time for flooding. @ABC30 pic.twitter.com/s4SyBLbrxC

Fresno County emphasized that Auberry Road is still closed at Alder Springs, contrary to some local news media reports that said otherwise. Other portions of Auberry Road are open to local traffic only. 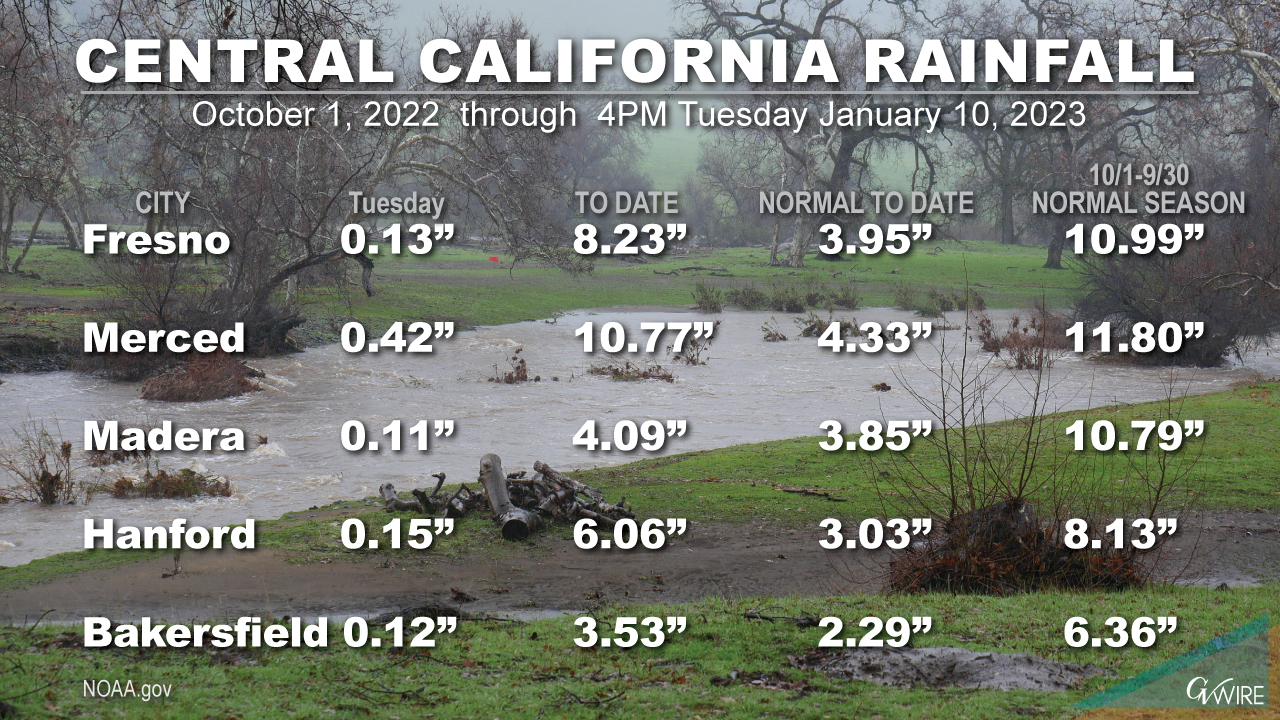 If there’s a silver lining in all the dark clouds that have loomed over the state in recent weeks, it’s the increase in water levels in reservoirs that hold water needed for residential and agricultural use.

Reservoir levels are rising, although many have not reached the halfway point, depleted by years of drought.

San Luis Reservoir in Merced County now contains 801,000 acre-feet of water, but is still at only 39% of capacity, said Molly White, operations manager for the State Water Project.

An acre-foot is approximately the amount of water used annually by a California household.

“Right now there are planned increases of these pumping rates just due to the storm inflows that are entering the Delta,” White said. “So at this point, we are maximizing our Delta pumping to the extent that we can and within our state and federal permits and storing the water in San Luis Reservoir to meet future water delivery demands later in the year.”

Even though the state is experiencing record rainfall, exports have been cut by more than half since Dec. 31 as a result of the 2019 Biological Opinions and the 2020 Incidental Take Permit State Water Project, the lawmakers noted.

“After several years of drought and low reservoir levels, it only makes sense to capitalize on wet conditions by maximizing south of the Delta exports at a time when the water is available,” the letter said. “This is no time to be ‘dialing back the pumps’ as mentioned by Director Karla Nemeth last week.”

White told reporters Tuesday that the Department of Water Resources and the federal Bureau of Reclamation are each pumping about the same amount: 3,500 cubic feet per second.

On Wednesday, Rep. David Valadao (R-Hanford) urged in a letter to President Joe Biden and Gov. Gavin Newsom that they waive impediments to Delta pump operations to ensure none of the recent storm flows go to waste.

“Government regulations should not and must not deny our constituents critical water from these storms,” the lawmakers wrote. 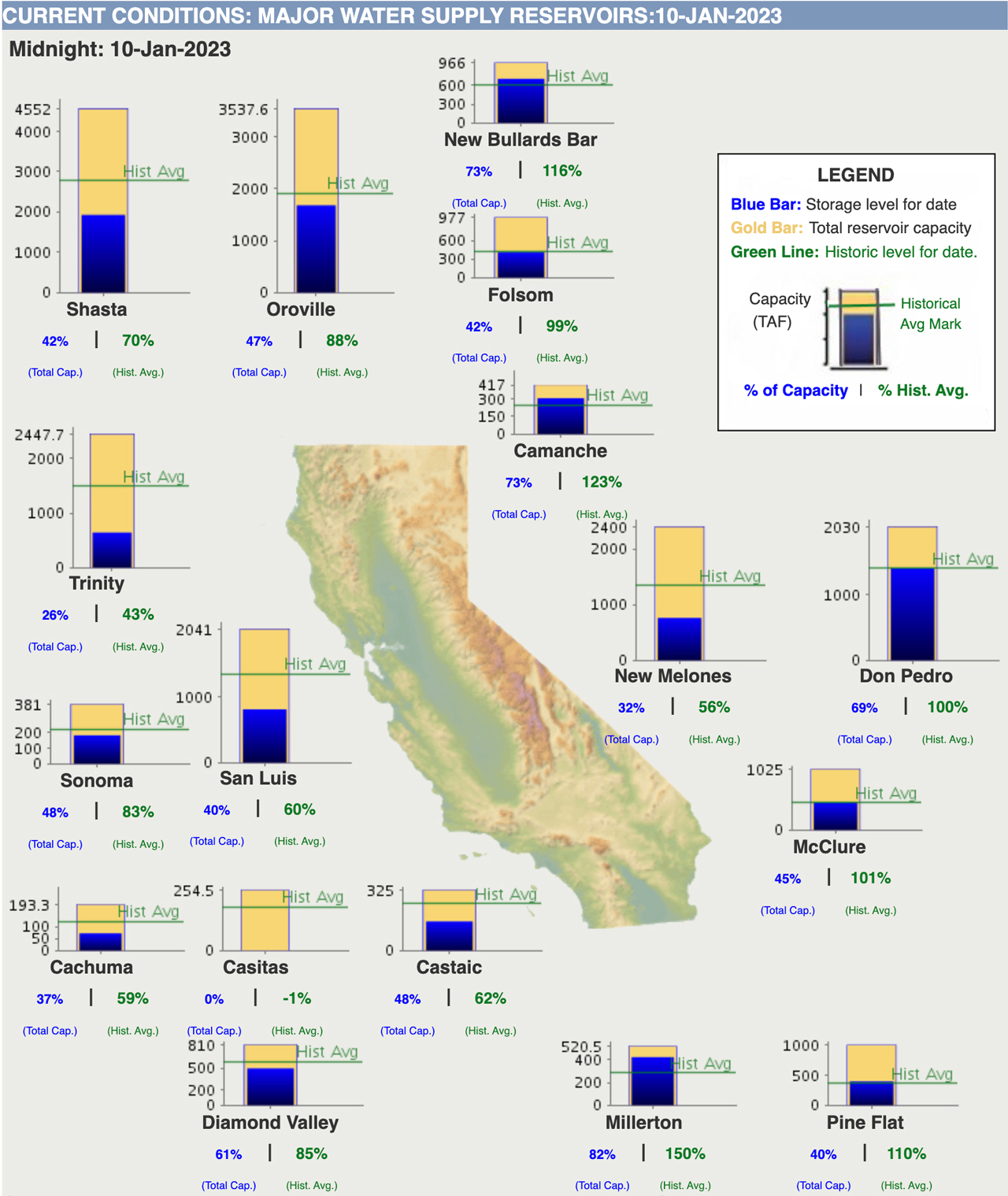