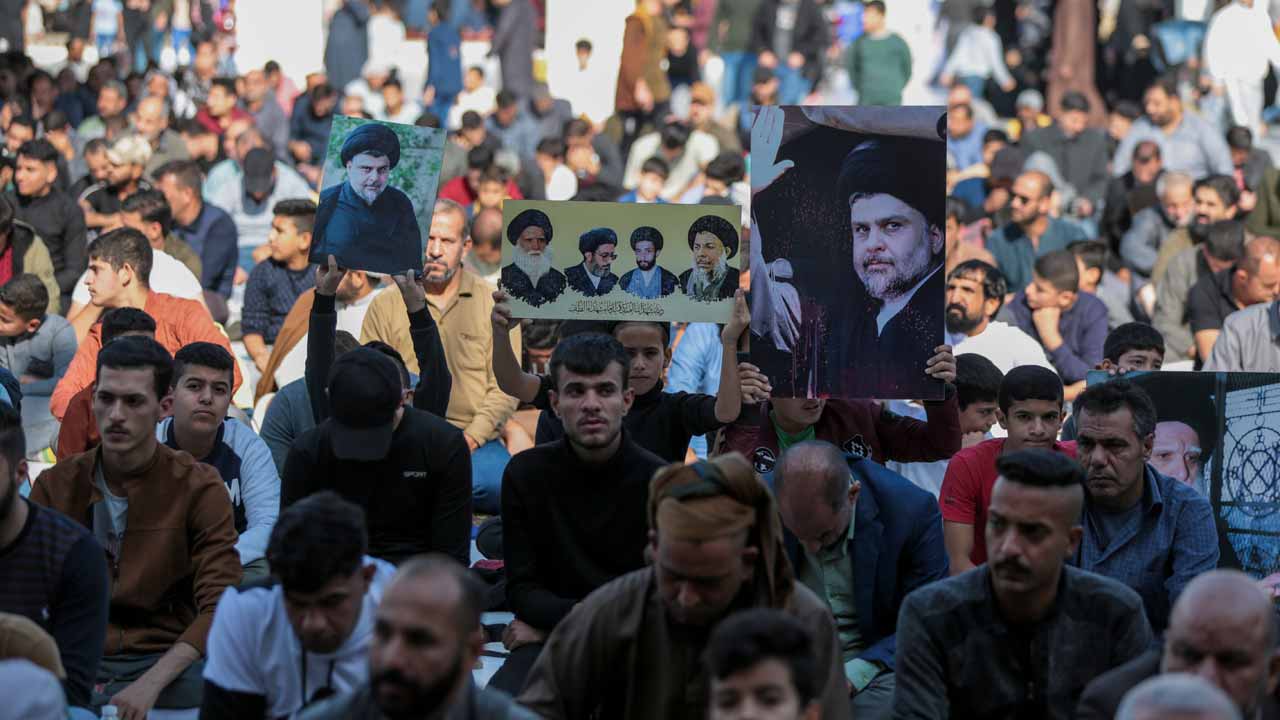 People hold up pictures of the Shiite cleric Muqtada al-Sadr during Friday prayers at a mosque in Iraq. (AP Photo/Anmar Khalil)
Share with friends

An influential Iraqi cleric who announced his withdrawal from politics four months ago has broken a period of relative silence to launch an anti-LGBTQ campaign.

Shiite cleric Muqtada al-Sadr posted a statement on Twitter Wednesday calling for “believing men and women (to) unite all over the world to combat (the LGBTQ community).”

He added that this should be done “not with violence, killing or threats, but with education and awareness, with logic and ethical methods.”

The religious leader’s call has stoked fears in the LGBTQ community, particularly given that al-Sadr’s followers have a history of violence. After the cleric announced his resignation from politics in August amid an impasse over government formation, hundreds of his angry loyalists stormed government buildings in the capital and set off clashes that left at least 30 dead.

On Friday, following the afternoon prayer session, thousands of al-Sadr’s followers lined up outside of mosques around the country to sign a pledge to “stand against (homosexuality) or (LGBTQ) by ethical, peaceful and religious means” and to demand “abolition of the homosexuality law.”

It was not clear what law the pledge was referring to. Iraq does not have a law that explicitly criminalizes homosexuality, although it has one that outlaws “immodest acts,” which Human Rights Watch has described as “a vague provision that could be used to target sexual and gender minorities.”

Al-Sadr’s proclamation comes amid a World Cup in Qatar that has drawn international scrutiny to LGBTQ rights there and in the region more generally. Qatar, where gay sex is illegal, faced intense international scrutiny and criticism around the games, including questions over whether LGBTQ visitors would feel safe and welcome. Some fans were barred from bringing items with rainbow colors, a symbol of LGBTQ rights, into stadiums.

The Gulf nation has said all are welcome, including LGBTQ fans, but that visitors should respect the nation’s culture.

Some of those who heeded al-Sadr’s call on Friday alluded to the World Cup culture wars.

In Kufa — a town in al-Sadr’s home province of Najaf province — hundreds lined up to sign the pledge on Friday. Kazem al-Husseini, imam of a local mosque, denied that the campaign was prompted by the World Cup, noting that al-Sadr had made similar statements previously. But he added that “at the World Cup there were attempts to promote this issue by Westerners who came to the (games).”

“There is a fear that the West is putting pressure on the Arab and Islamic regimes to legitimize same-sex marriage in the constitutions and laws so that they try to normalize this perversion,” he said.

In Baghdad’s Sadr City, Ibrahim al-Jabri, who also signed the pledge, said he is standing against the “corruptions that came to us from Europe and elsewhere, what they call freedoms. We also have the freedom to reject falsehood, to reject corruption.”

Despite the campaign’s nominal commitment to non-violence, LGBTQ people in Iraq fear that it will lead to more harassment and abuse in a country where their identity already puts them in danger.

The report released by the New York-based organization in collaboration with Iraqi rights group IraQueer also accused Iraqi police and security forces of being often complicit in compounding anti-LGBTQ violence and of arresting individuals “due to non-conforming appearance.”

“Attacks against LGBT people in Iraq have long been a political tactic,” said Rasha Younes, an LGBTQ rights researcher with the group said in an emailed statement. Public speeches like al-Sadr’s “have served to undermine LGBT rights and fuel violence against LGBT Iraqis, who already face killings, abductions, torture, and sexual violence by armed groups with impunity,” she added.

A university student in Najaf who identifies as queer and who spoke on the condition of anonymity out of fear for their safety, said that despite not being openly LGBTQ, they have been frequently harassed in the street for wearing clothes in colors and styles that do not fit local conservative norms.

Al-Sadr’s recent “hate speech” makes them more fearful, given the past acts of violence by his followers, the student said.

“I was thinking that I would wait until I graduated from the university and then go to Europe with a study visa, but now … I am thinking of taking precautions in case of any emergency event so I flee to the nearest safe place,” they said.