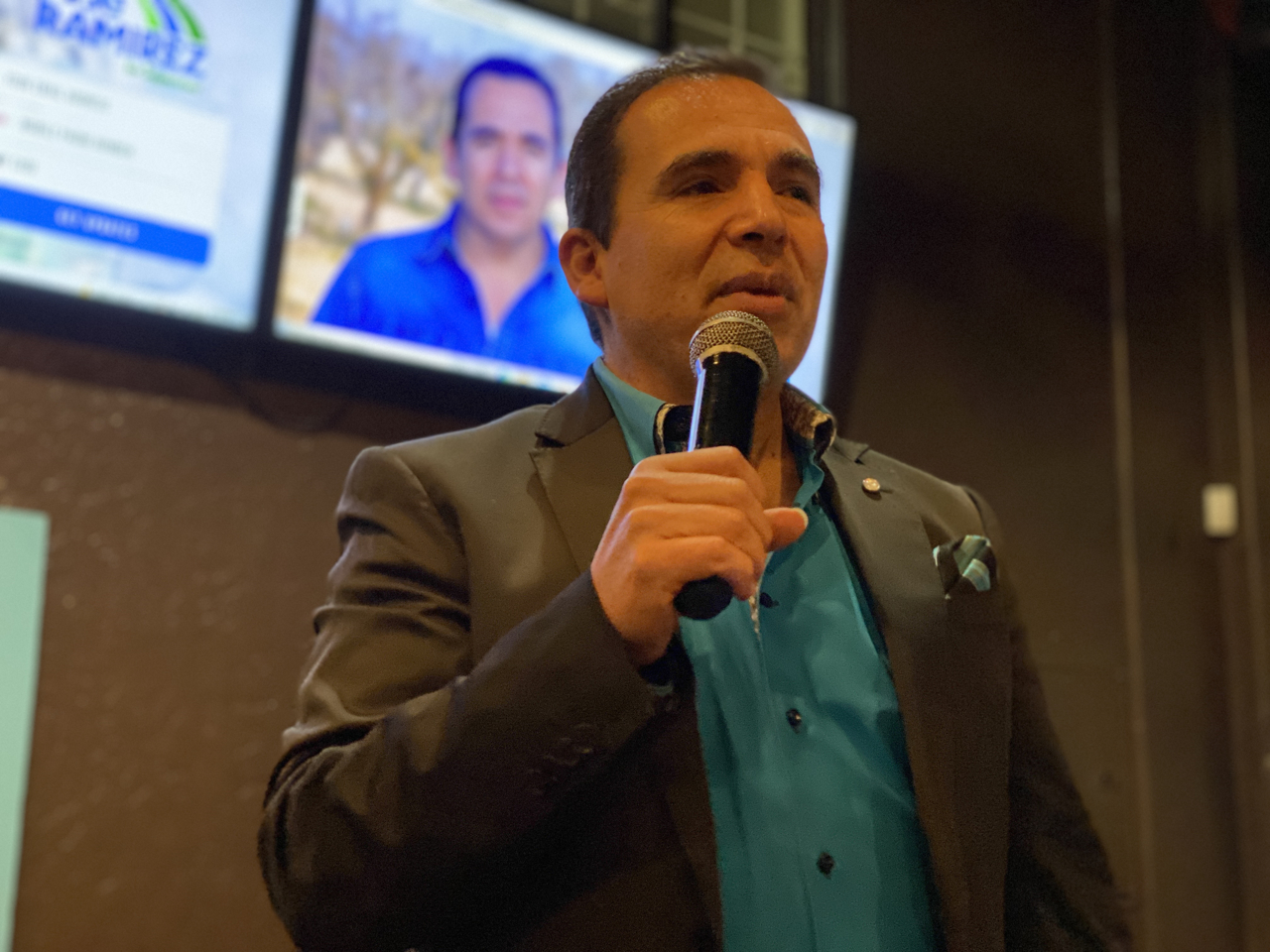 Jose Ramirez speaks to supporters at a fundraiser for his Fresno County supervisor campaign. (GV Wire/David Taub)
Share with friends

Jose Ramirez drew a strong turnout for his fundraiser on Wednesday. Ramirez is running for District 4 Fresno County Supervisor against incumbent Buddy Mendes of Riverdale.

Though it’s officially a nonpartisan race, party affiliation often influences the outcome. Ramirez, a Selma resident, is a Democrat, and Mendes is a Republican.

“Public service is not about politics. It’s about really getting people the resources that they need,” Ramirez told Politics 101 about why he is running. “I also want to make sure that people understand that I want to bring good policy to the board, a new voice.”

Water issues are one of Ramirez’s top priorities. So is broadband access.

“(I want to make sure) that the infrastructure and money that’s out there  reaches not just the urban areas, but the unincorporated areas and even those areas of the farming. Farming these days and farming tech are huge. So I’m sure that they would benefit from having reliable, fast speed internet access,” Ramirez said.

The event at Mezcal Lounge in downtown Fresno saw many of the Latino liberal community pledge their support for Ramirez. Among the supporters were the influential elders of local Latino politics — Amy Arambula and her husband Juan, the former assemblyman and Fresno County supervisor.

Ramirez is the former city manager of rural Fresno County towns of Firebaugh and Orange Cove, as well as Livingston in Merced County. He has also worked as a manager for the U.S. Bureau of Reclamation.

Residents protested when Ramirez was sacked by the Livingston City Council last year. The city council provided no reason for his termination.

“I believe in openness, transparency, a responsive government and and a representative government. I’m against any type of corruption,” Ramirez said about Livingston.

District 4 stretches from the western to the eastern border — from Coalinga to Orange Cove — on the southern end of the county. During redistricting last year, several community groups advocated for redrawing the district to a more compact area serving the east side of Highway 41.

Mendes comes in with incumbency and a financial advantage. He reported more than $247,000 cash on hand, through the last reporting date of Dec. 31. Ramirez has not posted any fundraising numbers yet.

Fowler City Councilman Daniel Parra has also filed to run for the seat. 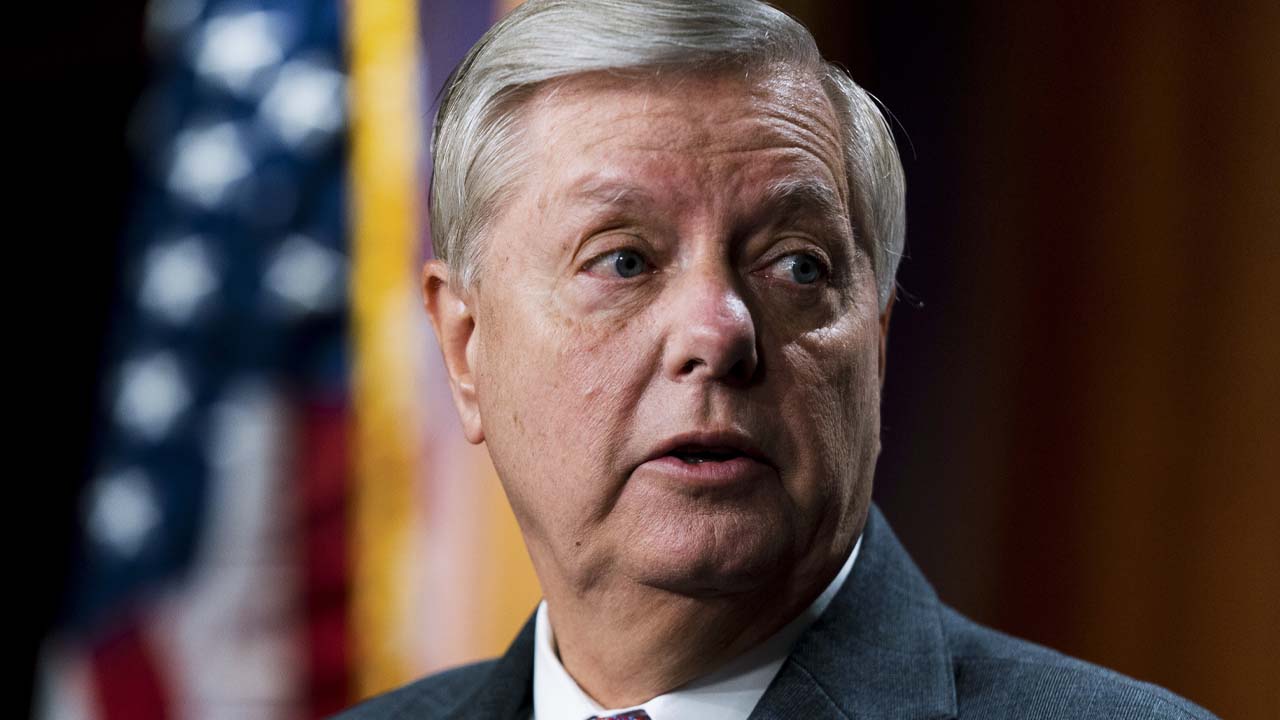 Sen. Lindsey Graham, R-South Carolina, was among the featured guests at a Republican fundraiser hosted by Richard and Karen Spencer in Fresno on Friday, Feb. 25, 2022. (AP File)

Sens.  Lindsey Graham and John Kennedy visited Fresno on Friday for a fundraiser hosted by Richard and Karen Spencer of Harris Construction.

About 150 people were expected to attend the lunchtime event. Graham, R-South Carolina, let his thoughts be known via Twitter on the nomination of Ketanji Brown Jackson to the U.S. Supreme Court on Twitter.

“It means the radical Left has won President Biden over yet again. The attacks by the left on Judge Childs from South Carolina apparently worked,” Graham wrote.

Graham was referring to J. Michelle Childs, a federal trial judge in his home state of South Carolina.

Kennedy, R-Louisiana, was more nuanced in a news release.

“I look forward to meeting with Judge Jackson and learning more about her,” Kennedy said.

Joining the two senators was David Perdue, the former Georgia senator now running for governor of that state.

Graham has visited Fresno before, also for fundraisers at Harris Construction.

Newcomer Files to Run Against Esparza 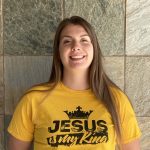 Courtney Westfall, a relative newcomer to Fresno and political newbie, has filed to run for city council against District 7 incumbent Nelson Esparza.

Westfall, 27, moved from Ohio a few years ago to take care of a sick relative. She currently is studying to become a teacher and works for Youth for Christ.

“I just care so much about this community and I would really like to see some things change,” Westfall said. “One of the concerns that I’ve noticed from my fellow community members is they don’t feel like they are heard.”

Westfall talked about children’s literacy being one of her top issues. She recognizes that might be an issue for a school board as well.

Public records show she is registered as no party preference, but she says she will run as a Republican. This would be her first run for public office.

Hilary Chittick is serving her 20th year on the Fresno County Superior Court bench. She is on the ballot for another six-year term with no competition, guaranteeing her re-election.

Chittick says she has no plans on leaving anytime soon.

She is one of 18 judges who will not be on the ballot, because there are no competitive Fresno County judicial elections this year.

Judges join the bench through by election or appointment from the governor. When a vacancy occurs, the next election for that seat happens after two Januarys go by, although the governor can appoint a judge to the seat in the interim. 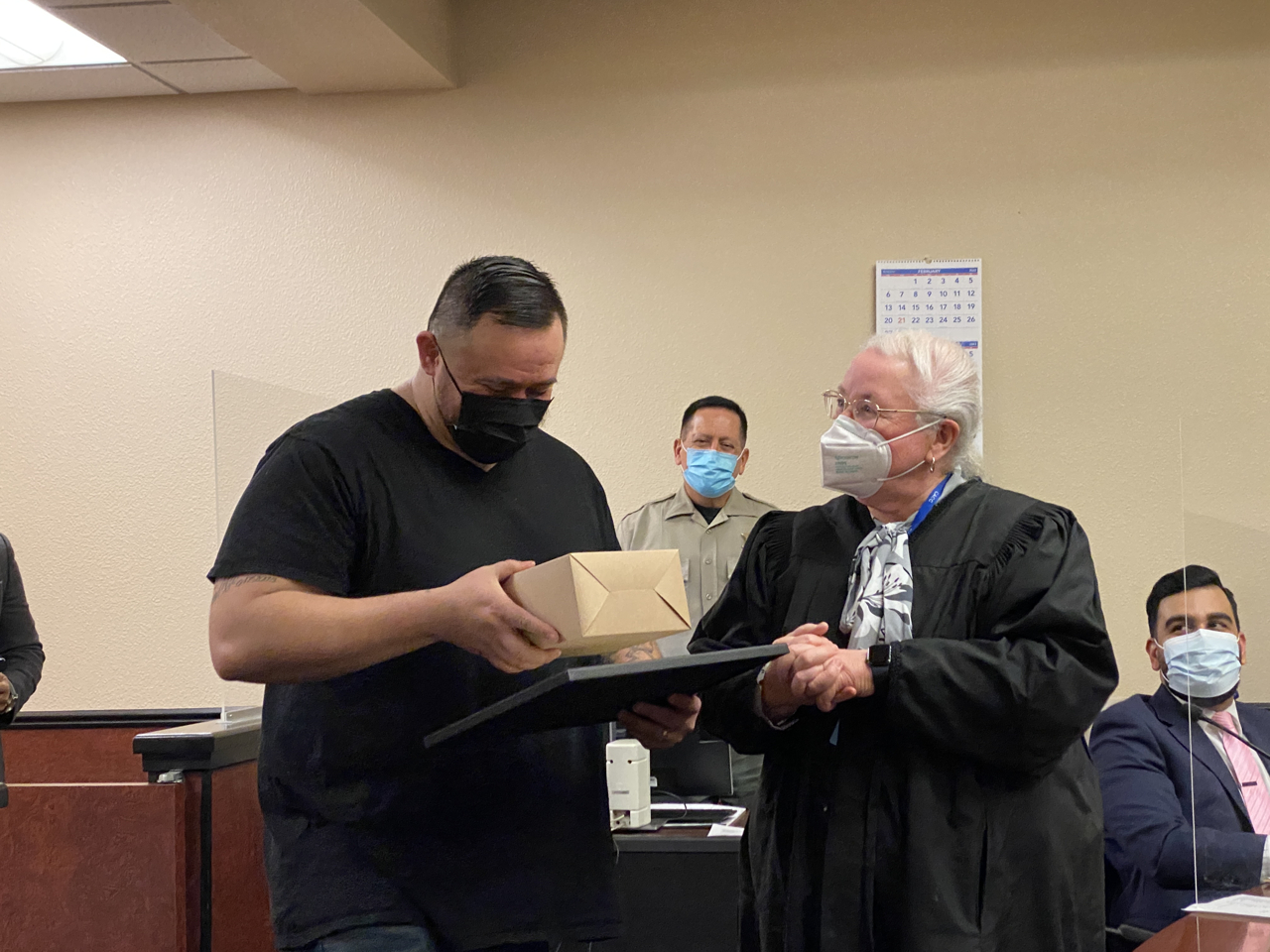 Villines Re-Appointed to State Board 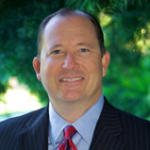 Mike Villines, the former Republican Assemblyman from Clovis, was re-appointed to the Central Valley Flood Protection Board. Gov. Gavin Newsom made the announcement Thursday.

Villines is now living in Placerville. He owns his own consulting firm.

The board’s website says the group is “responsible for ensuring that appropriate standards are met for the construction, maintenance, and protection of the flood control system that protects life, property, and wildlife habitat in California’s vast and diverse Central Valley from the devastating effects of flooding.”