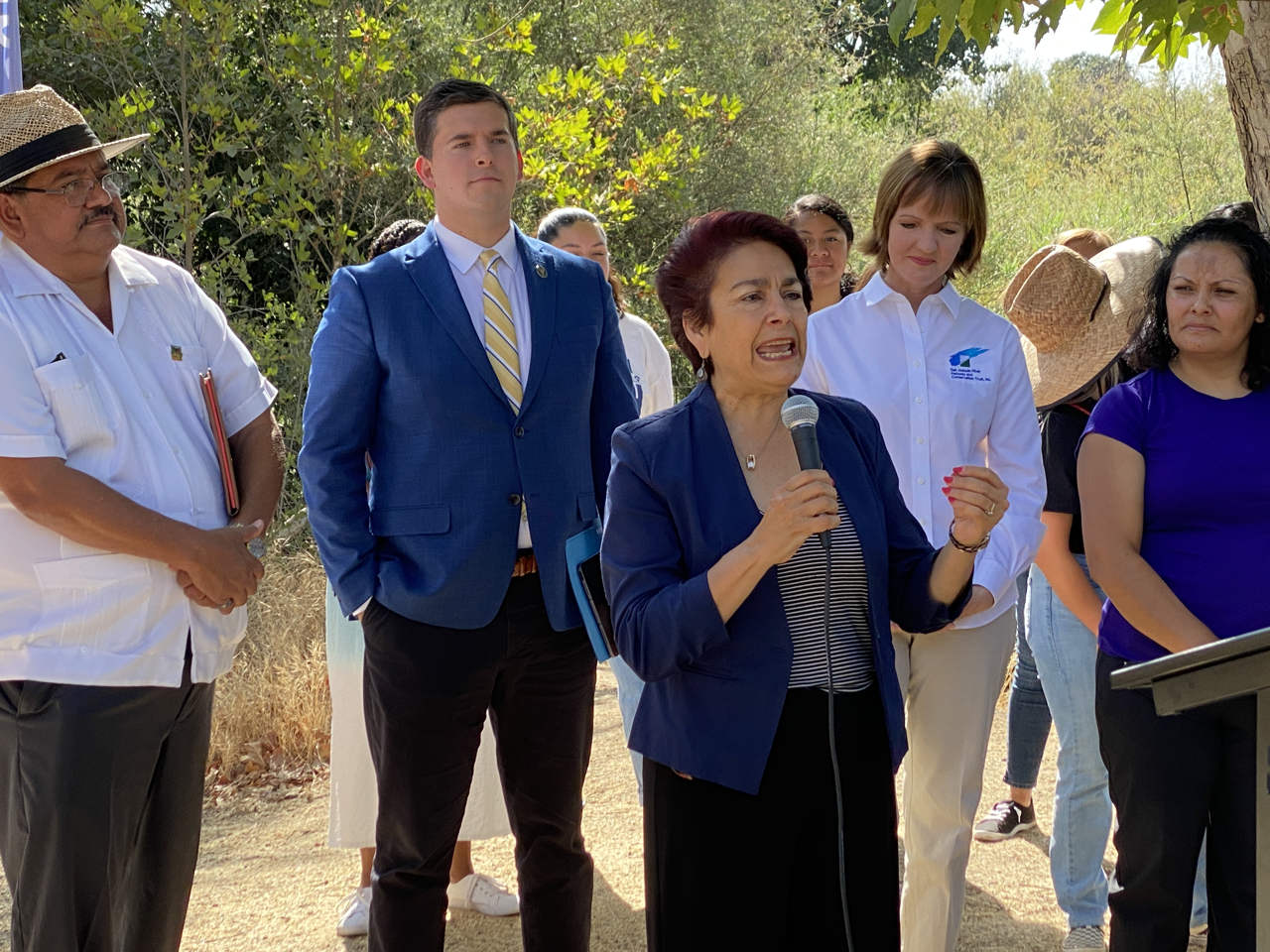 State Sen. Anna Caballero (with microphone) would need to move if she wants to run for re-election. (GV Wire File)
Share with friends

Anna Caballero is a state senator without a district.

In the final state Senate lines drawn by the California Citizens Redistricting Commission, if Caballero, D-Salinas, runs for re-election in 2022, she would need to move.

Her campaign says Caballero is reviewing her options, and moving is a possibility.

“Senator Caballero has had a residence and spent considerable time living in the city of Merced since 2019.  She felt it was important to put down some roots in the Central Valley portion of SD12,” her campaign consultant, Ken Smith, told GV Wire.

Members of the California Legislature — Assembly and Senate — must have a registered voting address within the district when they file to run.

If Caballero runs in Merced, that would put her in the same district as a fellow Democrat, Sen. Melissa Hurtado of Sanger. Hurtado also faces re-election next year.

Both are conservative Democrats who reflect many of the Valley’s attitudes on water, jobs, agriculture, healthcare, and other issues. Over the last three years, they have been frequent allies on legislation.

Caballero’s current District 12 includes her hometown of Salinas in the west and stretches to the cities of Merced and Madera in the north. The district also includes much of western Fresno County.

Even-numbered senate terms are up for re-election in 2022. If Caballero wants to remain in Salinas, she would have to leave the Senate and wait until 2024 when Senate District 17 is up for election. John Laird, D-Santa Cruz, currently represents the district and is eligible for re-election.

Hurtado would keep her same Senate district number — 14 — but see the geography drastically change. She would keep the southern portion of the city of Fresno and some of eastern Fresno County. She would lose Kings and parts of Tulare and Kern counties (including portions of Bakersfield).

The new Senate District 14 absorbs most of the 12th District: western Fresno County, and parts of Madera and Merced counties.

Calls to Hurtado’s campaign team were not returned before the publication of this story. 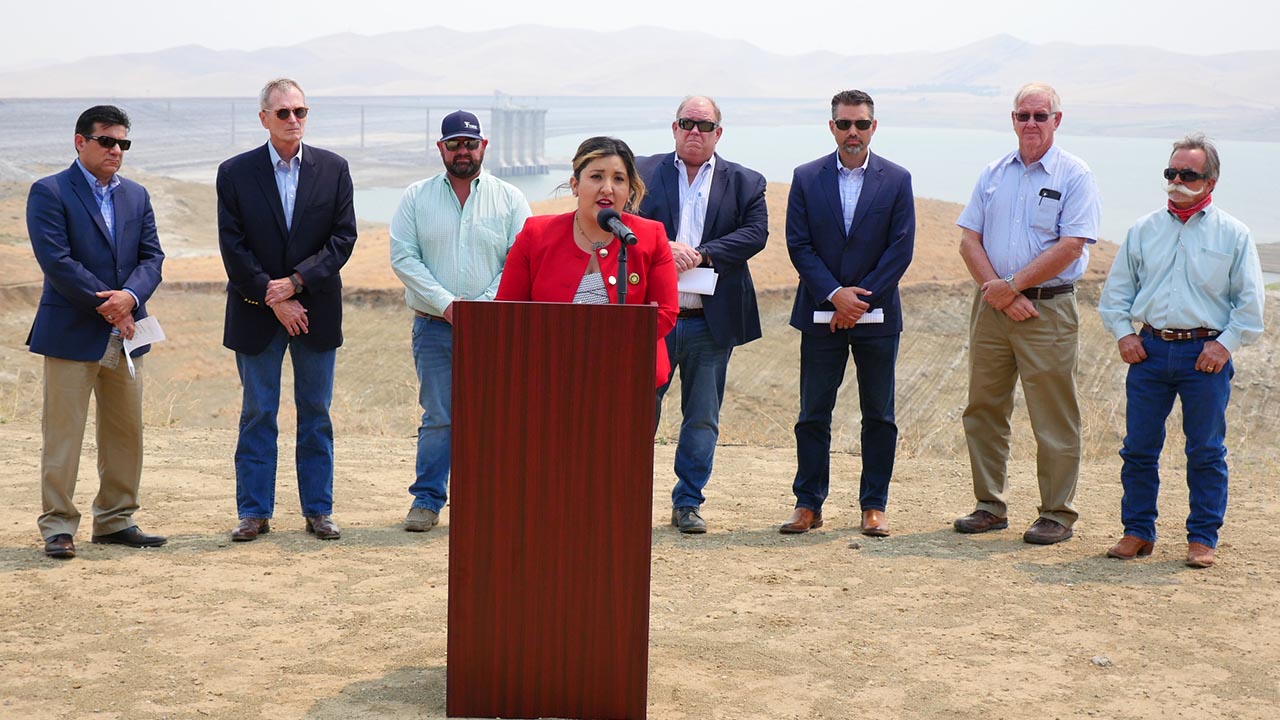 Will Borgeas Stay or Go?

North Fresno and Clovis would change from SD 8 to SD 12. The district would also include most of the city of Visalia and parts of the city of Tulare and Bakersfield.

Where SD 8 heads east to the Nevada state line and north up to Sacramento County, the new SD 12 moves westward, to include north Fresno, Clovis, and parts of Tulare and Kern counties. The most populous areas are currently represented by Sen. Andreas Borgeas, R-Fresno, in what is known as Senate District 8.

Borgeas said he is interested in running for Congress following the announcement that Devin Nunes, R-Tulare, is resigning at the end of the month. If Borgeas does that, he would not be able to run for Senate re-election.

Nunes’ vacancy would create a special election in his current district line. The regular election primary would take place in June for the full-time seat.

Eastern portions of Madera County, currently in SD 8, will shift to SD 4, which will also absorb several Gold Country and mountain counties currently represented by Borgeas. Jim Nielsen, R-Red Bluff, is the current SD 4 senator, but terms out in 2022. The new SD 4 includes Modesto and Turlock.

Similar to Hurtado, Sen. Shannon Grove, R-Bakersfield, keeps her district number, but the new district will be unfamiliar.

The current SD 16 includes parts of Kern County,  Visalia, and parts of Tulare County to the north, and stretches to the Nevada border.

The new SD 16 will include some of the same parts of Bakersfield, but will move north to include parts of Tulare and Kings counties — including Hanford, Lemoore, Porterville and portions of Visalia and Tulare. 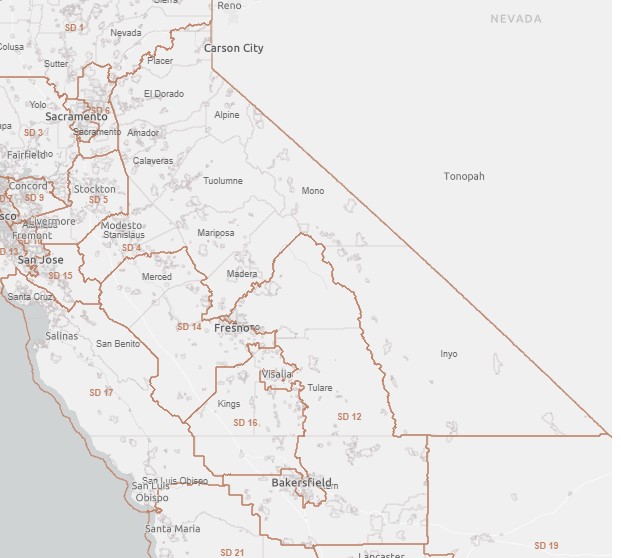 The final state Senate map. An interactive version can be found here.