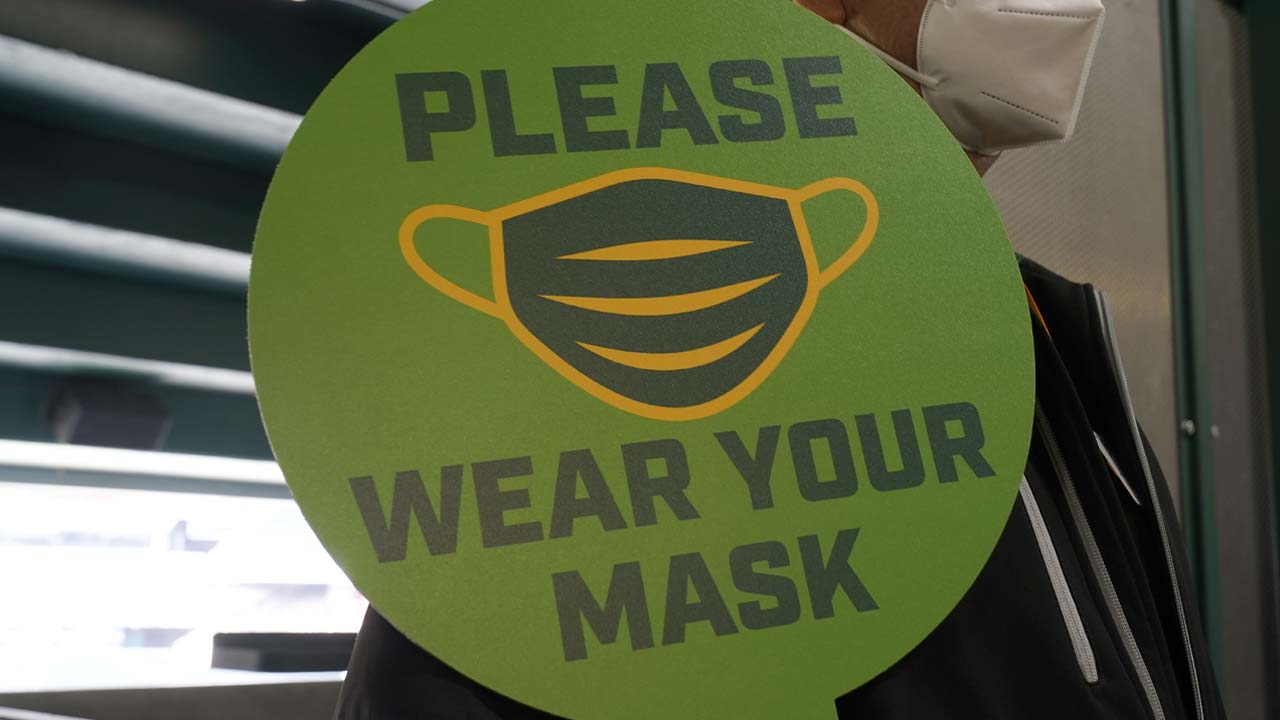 Masks will be required when the Fresno State football team plays at 11th-ranked Oregon on Saturday. (AP File)
Share with friends

EUGENE, Ore. — Fans in Eugene for No. 11 Oregon’s home opener against Fresno State on Saturday will need to wear masks — regardless of vaccination status — as COVID-19 cases surge nationwide.

But at Utah, state regulations ban mask requirements, so the Utes can only offer suggestions.

As the college football season opens, Pac-12 teams have a patchwork of varied regulations to follow when it comes to the coronavirus.

Oregon and Oregon State became the first Power Five schools to require proof of vaccination or a negative COVID-19 test for people over the age of 12 to attend football games. Other schools followed.

Related Story: UConn Wasn’t Much of a Test, But Oregon Will Be for Bulldogs

But a new mask requirement, even at outdoor events, kicks in across Oregon on Friday, per order of Gov. Kate Brown. It impacts venues where social distancing is not possible — like football games. Children under 5 are exempt.

“The Delta variant is much more contagious than previous variants we’ve seen, and it has dramatically increased the amount of virus in our communities,” Brown said in a statement. “Masks have proven to be effective at bringing case counts down, and are a necessary measure right now, even in some outdoor settings, to help fight COVID and protect one another.”

Utah opens its season at home Thursday against Weber State, and it’s an opportunity for fans to get a first look at the stadium expansion project that increased capacity to 51,444.

The school encourages fans to wear masks, but that’s as far as it can go. In May, the state enacted legislation that bans schools from imposing mask mandates.

“In accordance with state law, the university is not requiring attendees of university events to wear masks, or to prove vaccination status. However, consistent with the university’s messaging, Utah athletics is strongly encouraging fans to wear masks when attending games, in the interests of health and safety,” the school said in a statement.

Like most of the league’s other schools, Washington requires masks at indoor spaces at Husky Stadium, and also suggests its fans mask up when they can’t socially distance. At California, fans are “strongly encouraged” to wear masks.

With the delta variant giving rise to cases across the country, the lingering question is whether fans will avoid games.

The announced crowd was 32,982 for UCLA’s 44-10 win over Hawaii last weekend, but the actual crowd appeared much smaller. It was the second-lowest attendance at the Rose Bowl since the Bruins started playing there in 1982.

Of course, it could have been the heat — it was 95 degrees — or the fact that students have not yet returned to school.

A clearer picture will no doubt emerge Saturday when the Bruins host No. 16 LSU.

Indeed, the Pac-12’s programs that are reporting rates are all over 85% vaccinated

“Our guys have worked really hard and have done everything possible to get themselves in great condition in preparation for this opportunity for this season. They’ve obviously taken protocol and COVID very seriously,” Oregon coach Mario Cristobal said. “We’re almost just about in the mid-90s (percent) from a vaccination perspective, which is important. This means a lot to them, so they want to take every precaution that they can.”

Washington State coach Nick Rolovich initially said he would not receive the vaccine. But then Washington Gov. Jay Inslee mandated that all state employees be vaccinated unless they have medical or religious exemptions.

Rolovich has since said he would comply with the mandate but won’t say if he’s vaccinated or applied for an exemption. The deadline is Oct. 18.

Rolovich’s vaccination status could mean he’s on the hot seat in just his second season with the team if it continues to draw negative attention on Washington State. His stance drew criticism when he was the only Pac-12 coach who could not appear in person at the league’s media day.

It remains to be seen whether recruiting has been impacted.

Temperatures Prove It. This Is Fresno’s Hottest Summer Ever.