Fresno police were involved in two separate officer involved shootings over the weekend. Sergeant Jeff LaBlue tells GV Wire℠ there were also 5 murders (one of those a stabbing), and 5 other shootings in the past few days.

In the past week there have been two incidents involving innocent bystanders.

Fresno has 50 homicides this year as opposed to 34 at the same time last year. LaBlue says 35 of those are gang related.

City Councilman Luis Chavez says there’s no more time to waste. He is planning to hold meetings this week with other city leaders to discuss any and all options – including curfews – to try to stop the violence.

Chavez says the state of California bears some of the blame for not delivering on rehabilitation funds promised when propositions 47 and 57 were passed by voters.

But, he says there are still many tools available at the local level to bring a stop to shootings and killings.

“Regular people are now in fear of going out. Just going to the bakery or going outside for a walk.”–City Councilman Luis Chavez

Fresno police shot and killed Gregory Putnik Sunday night after they say he pointed a rifle at them. Officers say the incident started around 9:25 p.m. on the 1300 block of Esther in central Fresno after a report of an attempted carjacking. The suspect, Putnik, managed to get access to a rifle from a home and fired a shot at a group of teenagers across the street.

While fleeing north on Esther, police say, Putnik pointed the rifle toward an officer, who shot and wounded the suspect. Putnik continued going yard to yard, with officers giving chase. In the 900 block of north Pine, police say officers were again confronted by him. When Putnik failed to surrender, officers opened fire with their handguns, and struck the suspect, authorities said. Putnik died at the hospital.

The other officer involved shooting occurred Saturday afternoon shortly after 4:30 p.m. in the 4100 block of East Balch. Police say s 911 call was received from a man who claimed he’d just stabbed and killed his mother inside his residence. When officers arrived, the suspect barricaded himself in the house and refused to come out. After about an hour, police say the suspect — identified as Miguel Carranza — came outside and advanced towards officers while armed with a knife.

After two ‘less lethal’ bean bags were fired at Carranza and failed to stop him, authorities say, officers shot him. Carranza fell to the ground and surrendered. He was given medical aid by the officers and taken to the hospital where he’s listed in stable condition. Authorities say he’ll be booked into jail once he’s medically cleared. Meanwhile, officers found his dead mother inside the house. The Fresno County Sheriff’s Office identified her a as 56 year old Delia Carranza Sandoval.

Saturday night, officers responded to the area of Shaw Avenue and Fresno Street in front of the Cigar World store around 10:30 p.m. to follow up on a reports of a shooting victim at the location. They found a 23-year-old man who had been killed and a 29-year-old man who was injured. Officers arrested a 15-year-old boy who they say shot the two victims. He was booked into juvenile hall. Police say they’re looking for more suspects who may have been involved.

In southeast Fresno, a Saturday night shooting left a man in his 30s dead. KSEE/KGPE reported the police department’s ShotSpotter system detected five rounds had been fired in the area near Willow and Kings Canyon avenues at around 9:30 p.m. “To date, this is the 21st homicide in the southeast policing district and the 49th homicide for the city of Fresno, Southeast Policing District Commander, Capt. Anthony Martinez told the television station.

All Hands on Deck Approach

Chavez represents District 5, encompassing much of southeast Fresno. He believes recent violence is being driven by a confluence of factors including high unemployment due to COVID-19, high poverty, closed schools and unsupervised teenagers.

All that leads to what he recently referred to as a ‘crime wave’ at a recent city council meeting. Now, he says nothing is off the table to address the problem, as far as he’s concerned.

Related Story: ‘We’re in the Middle of a Crime Wave.’ Fresno Leaders Voice ...

“I see this as the all hands on deck approach where we’ve got to get our churches, our faith based organizations, non profits, the city, the county, the state, our juvenile justice system, and our sheriff at the table,” says Chavez. “This is not just a police problem, it’s a community problem. And I think those solutions are going to come about of that conversation.”

He said discussions will begin this week.

Chavez says he’s had conversations with police chief Andy Hall and police commanders in the southeast policing district. “We have gangs that are now fighting for turf,” says Chavez. “Regular people are now in fear of going out. Just going to the bakery or going outside for a walk.”

He also believes groups like ‘Street Saints‘, and ‘Fresno Barrios Unidos‘ have a unique understanding of the community and can help get the necessary conversations started.

“Maybe it’s time to do a curfew for young folks, or maybe stop selling liquor at a certain time because a lot of these shootings have happened at liquor and convenience stores past 10 p.m.,” explains Chavez. “I think the conversation needs to also be, where is the parent responsibility for a lot of our young folks that are out there?”

Chavez says there needs to be a way of holding parents accountable. “If you recall, years ago, there used to be that commercial. ‘It’s 10 o’clock. Do you know where your kids are?’ We went away from that,” he said.

He thinks it’s time to re-engage some of what’s worked in the past.

“There’s an old saying that nothing stops a bullet better than a job,” explains Chavez. “That’s at the heart of what’s occurring now, the poverty, the unemployment.”

Chavez says there was a shooting not far from his house on First and Tulare that injured an innocent bystander.

“A woman was caught in the middle of two gangs fighting,” says Chavez. “So even if you’re not involved in gangs, that’s proof that you could still get caught up in it and eventually get shot.”

ABC30 reported an 18-year-old woman was shot in the legs while heading home from a gas station. Police say she was caught in the middle of a gun battle between two people.

GV Wire℠ contacted Quick Pick & Deli which is located at the intersection where the woman was shot. “The bad issues are homeless people here,” employee Jay Singh tells GV Wire℠  by phone. “I do call the police, officers do show up and it doesn’t make much difference, the homeless are still here.”

A street vendor was shot on Sunday in the area of Madison Avenue and Mariposa Street just before 5 p.m. When officers arrived, they found a man in the roadway suffering from a gunshot wound to his lower body. KSEE/KGPE reports police have three suspects in custody.

Some of Chavez’ constituents have told him they’ve recently changed their grocery shopping habits to only shop during the day so they can feel safer. The FoodMaxx at Kings Canyon and Clovis Avenue recently hired security guards, Chavez said.

“We now have this dynamic playing out in our city where the fear is real for the regular Joe that just wants to go about their day,” said Chavez.

Chavez explains, “What happens in southeast is it’s a very diverse community.”

He says his district is home to African American gangs, Hispanic gangs, and Southeast Asian gangs.

“We essentially have a merger of all of those different groups coming together and then conflict arises,” describes Chavez.

Christy’s Donuts is just down the street from where the food vendor was shot over the weekend. The owners of the shop have done business at the corner of Fresno and Belmont streets for about 25 years.

Ng has been a manager there for about 10 years. “I’m not too scared because I feel like the people around here are used to us,” he said. “I feel like we’ve called the cops so many times, we kind of know how to handle it. People know to not cause problems around here.” 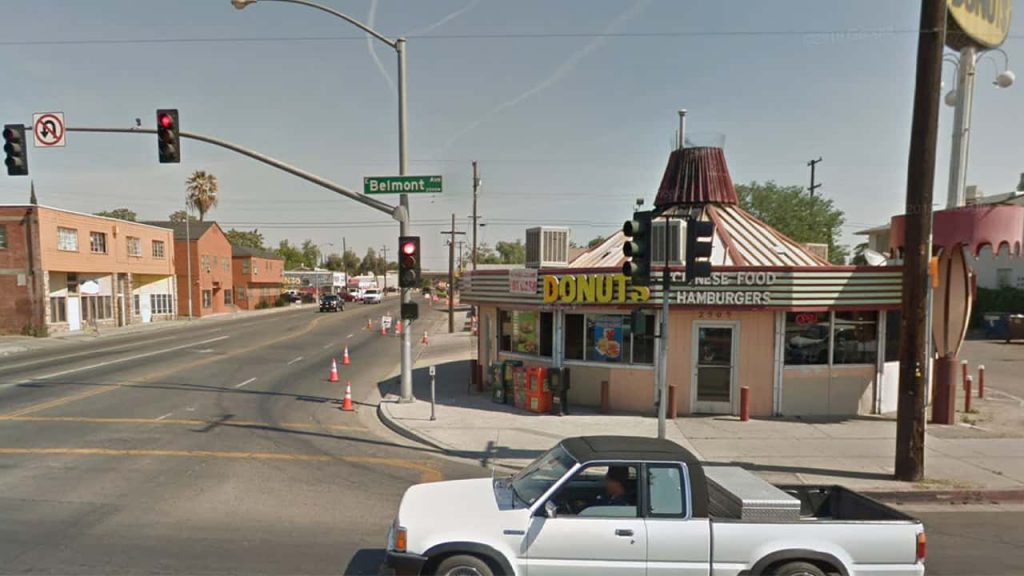 Christy’s Donuts has operated at the corner of Belmont and Fresno streets for about 25 years. (Google Street View)