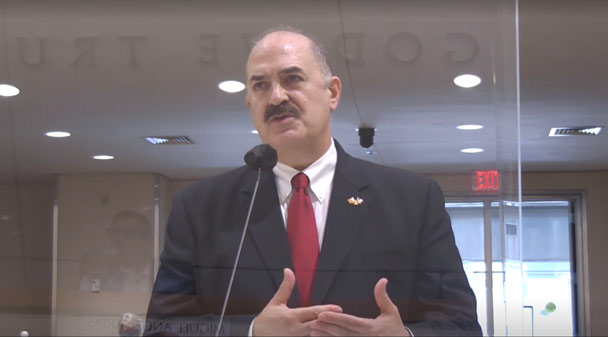 The council called Gliatta in for a workshop after controversy erupted over the delayed release of a report from his office on a police brutality claim.

Last month, Gliatta told the Fresno Commission on Police Reform that he didn’t include his findings of the January 2019 incident during his July quarterly report. He expressed concern about how the community would react to it in the wake of national outrage sparked by the death of George Floyd at the hands of Minneapolis police.

“It was delayed. It was never going to be withheld,” Gliatta told the council. “There was no deception.”

Despite questions raised previously by council members and criticism by members of the community, Gliatta’s answers seemed to satisfy council president Miguel Arias.

“I think it’s fair to say that the national environment and the recent incidents have just made everybody super hypersensitive and a little bit distrusting of public entities. There was criticism. There was a clear misunderstanding. You’ve clarified it. So thank you for doing that,” Arias said.

Gliatta planned to include his findings in his October quarterly report, but released it early after community complaints. Gliatta concluded that police did use excessive force in the London Wallace incident. That case is now in federal court.

Councilman Garry Bredefeld praised Gliatta — calling him a man of great integrity  — while at the same time blasting the auditor’s critics, specifically a Fresno Bee columnist.

“People were criticizing you. They didn’t even really know your report was critical of the police, which is antithetical to what one columnist hack at the Fresno Bee who loves to attack the police and attack you on a personal level as well. I mean, his columns are worthless. His opinions are worthless. There’s a big reason why The Fresno Bee is bankrupt. And he attacked you personally,” Bredefeld said.

The reference was to Marek Warszawski, and a column he penned about the Gliatta controversy.

Congressional Cash: Cox Edges Valadao. But Like Race, It is Close

TJ Cox and David Valadao are close in the cash race in what is again expected to be one of the nation’s tightest congressional races.

Cox (D-Fresno) upended Valadao (R-Hanford) by 862 votes in 2018 to win the seat. Valadao hopes to win the rematch.

According to third-quarter campaign fundraising totals from the Federal Election Commission, Cox outraised Valadao in the quarter by less than $600,000, and has raised more than $1.8 million overall.

However, Valadao has $480,000 more cash on hand. Both candidates are ubiquitous on TV.

The other two races from Fresno have significant advantages for the incumbents. Devin Nunes (R-Tulare) raised more than $800,000 more in the quarter than Phil Arballo (D-Fresno) and nearly $8 million overall.

Jim Costa (D-Fresno) raised twice as much in the quarter than Kevin Cookingham (R-Madera County) and eight times as much overall. The two will meet in a debate on October 20 at 6 p.m., carried live by CW 59 and KMJ radio (580 AM/105.9 FM).

Because of a 2019 state law, any jurisdiction that does not set its own limits would default to the state amount of $4,700 per contributor per election cycle.

Clovis did not have a limit, and voted it to keep it that way. It’s only restriction is voluntary — spending limits equaling $1 per city resident. It was a 4-0 vote with Vong Mouanoutoua absent.

Councilwoman Lynne Ashbeck, who is running for re-election in March, felt the state limit was to high.

“If it’s not broken, why fix it?” asked councilman Bob Whalen.

By comparison, the city of Fresno already tied its contribution limits to the state level. Fresno County voted to set a $30,000 limit.

Ballot Returns Are Up

By any metric, Fresno County is shattering records for early voting.

As of Friday, more than 80,000 voters have returned ballots either by mail or drop box. That is 17% of all registered voters.

Compared to this point in the last presidential election, 2020 is up 50,000 ballots.

In March, Fresno County mailed ballots to every active registered voter for the first time. Now, every county in the state is engaging in the process. Only 14% of voters in the county actually voted in the polls, with the rest either mailing or dropping off ballots.

Earlier this week, Politics 101 reported that the General Plan Implementation Review Committee voted on a motion for reparations for Black Fresnans.

The motion maker, Grecia Elenes of the Leadership Counsel for Justice and Accountability, reached out to Politics 101 to note that the motion was amended to include indigenous community. However, despite the request from member Darius Assemi of Granville Homes, Elenes did not accept an amendment to include the Armenian community.

Elenes preferred that reparations for Armenians would be included in a separate motion, which no other member made.

Assemi is publisher of GV Wire.

Related Topics:2020 ElectionCity of ClovisFresno Police Reform Commission
Up Next