YEREVAN, Armenia — Armenia accused Azerbaijan on Thursday of shelling a historic cathedral in the separatist territory of Nagorno-Karabakh, where nearly two weeks of heavy fighting has killed hundreds of people.

The Holy Savior Cathedral, also known as the Ghazanchetsots Cathedral, suffered interior and exterior damage, according to the state-run Armenian Unified Infocenter.

Media reports said some children were inside the cathedral in the town of Shusha at the time of the shelling, and although they were not wounded, they suffered from stress after the attack.

Built in the 19th century, the cathedral suffered significant damage during ethnic violence in 1920. It was restored after fighting between Armenian and Azerbaijani forces in the 1990s and is part of the Armenian Apostolic Church.

The latest clashes between between Azerbaijani and Armenian forces began Sept. 27 and mark the biggest escalation of the decades-old conflict over Nagorno-Karabakh. The region lies in Azerbaijan but has been under control of ethnic Armenian forces backed by Armenia since the end of a separatist war in 1994.

Fighting with heavy artillery, warplanes and drones has continued despite numerous international calls for a cease-fire. Both sides accuse each other of expanding the hostilities beyond Nagorno-Karabakh and of targeting civilians.

According to the Nagorno-Karabakh military, 350 of its servicemen have been killed since Sept. 27. Azerbaijan hasn’t provided details on its military losses. Scores of civilians on both sides also have been killed.

Also on Thursday, Azerbaijani officials accused Armenian forces of attacking several of its villages and towns, and Nagorno-Karabakh forces said they were “suppressing the activity” of Azerbaijani forces along the line of contact.

Stepanakert, the capital of Nagorno-Karabakh, has been under intense shelling. Residents are staying in shelters, some of which are in the basements of apartment buildings. 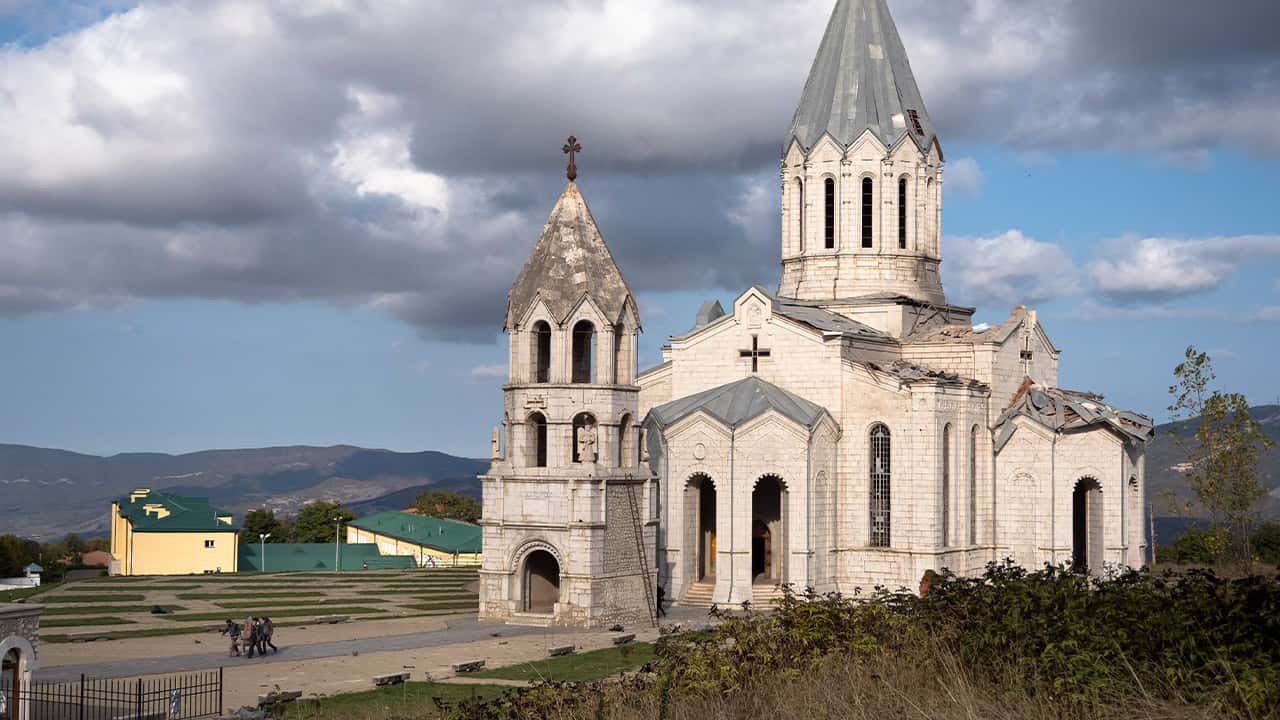 Men carry out furniture from the Holy Savior Cathedral damaged by shelling during a military conflict, in Shushi, outside Stepanakert, self-proclaimed Republic of Nagorno-Karabakh, Thursday, Oct. 8, 2020. Armenia accused Azerbaijan of firing missiles into the capital of the separatist territory of Nagorno-Karabakh, while Azerbaijan said several of its towns and its second-largest city were attacked. (AP Photo)

A woman who is sheltering with her neighbors in Stepanakert said the fighting killed her two sons in 1992 and now her grandchildren are involved in it.

The woman, who identified herself only by her first name, Zoya, told The Associated Press that “if it is necessary, I am also ready to fight with a weapon in my hands because it is our land, the land of our ancestors,”

Azerbaijan says Armenia’s withdrawal from the region is the main condition for a cease-fire. Armenian officials allege Turkey is involved in the conflict and is sending Syrian mercenaries to fight on Azerbaijan’s side. Turkey has publicly backed Azerbaijan in the conflict but denied sending fighters to the region.

Russia, the United States and France co-chair the so-called Minsk Group, which was set up in the 1990s under the auspices of the Organization for Security and Cooperation in Europe to mediate the conflict. They have called repeatedly for stopping hostilities and starting peace talks.

The group was scheduled to meet Thursday in Geneva, and Azerbaijan’s foreign minister was set to attend to give Baku’s position on the conflict.

Turkish President Recep Tayyip Erdogan criticized the Minsk group for failing to resolve the issue. He reiterated his country’s full support for Azerbaijan, which he said was determined to reclaim its territory.

“The Minsk group until now has not shown any will to solve this problem. The solution to the issue — which has turned into gangrene, so to speak, because of Armenia’s uncompromising and spoiled attitude for nearly years — is for the occupation to end,” Erdogan said in remarks via video at an economic cooperation forum in Istanbul.

“We see that Azerbaijan is extremely determined in liberating its territory. As Turkey, we support with all our heart Azerbaijan’s righteous struggle to reclaim its territory. We invite all countries who defend justice and fairness to support Azerbaijan,” he added.