SACRAMENTO — At first, Illinois Gov. J.B. Pritzker tried to play nice. He limited criticisms of the federal government’s handling of the coronavirus pandemic and asked for medical supplies through official channels.

But nothing came, so he went on television. The first-term Democrat blasted the Trump administration Sunday on CNN for failing to help states obtain masks, gloves and other protective gear.

It got President Donald Trump’s attention. After a Twitter feud and some mudslinging (Pritzker compared Trump to a “carnival barker”), the two got on the phone Monday, and Trump promised Illinois 250,000 masks and 300 ventilators.

Facing an unprecedented public health crisis, governors are trying to get what they need from Washington, and fast. But that means navigating the disorienting politics of dealing with Trump, an unpredictable president with a love for cable news and a penchant for retribution.

Republicans and Democrats alike are testing whether to fight or flatter, whether to back channel requests or go public, all in an attempt to get Trump’s attention and his assurances.

At stake may be access to masks, ventilators and other personal protective gear critically needed by health care workers, as well as field hospitals and federal cash. As Gov. Gretchen Whitmer, D-Mich., put it, “I can’t afford to have a fight with the White House.”

Underlying this political dance is Trump’s tendency to talk about the government as though it’s his own private business. The former real estate mogul often discusses government business like a transaction dependent on relationships or personal advantage, rather than a national obligation. 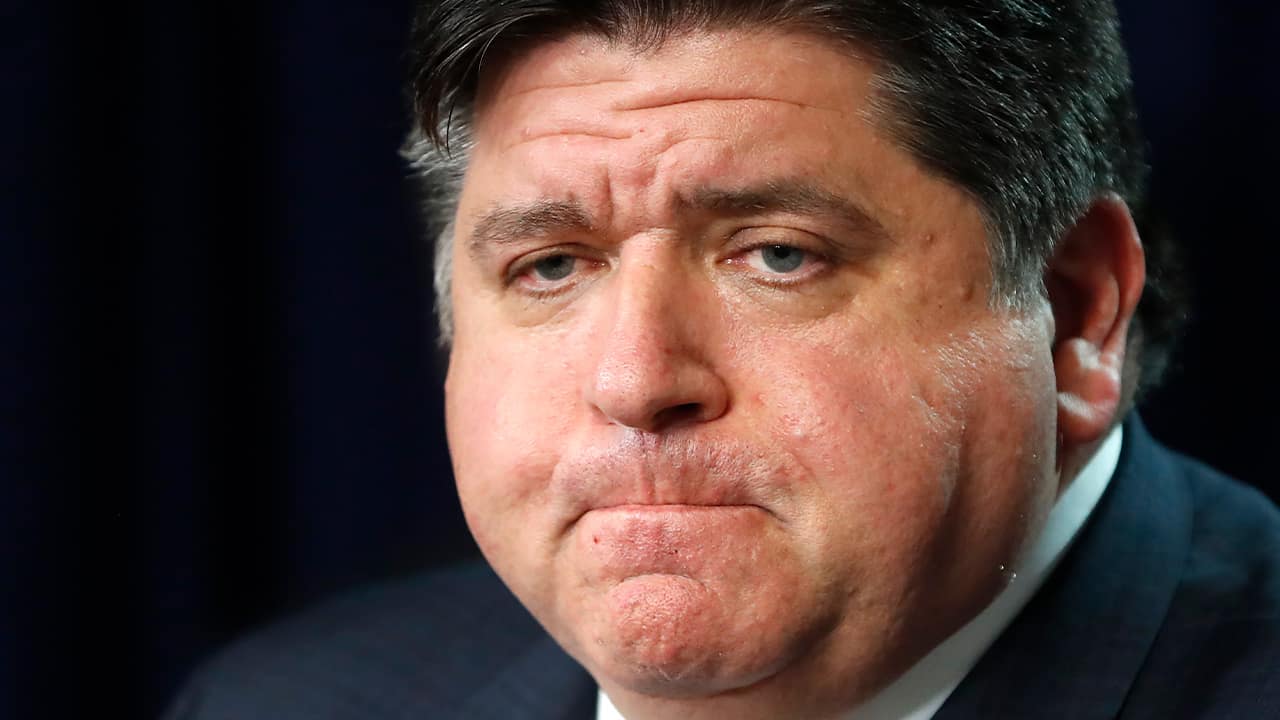 In this March 19, 2020 photo, Illinois Gov. J.B. Pritzker listens to a question during a news conference in Chicago. Amid an unprecedented public health crisis, the nation’s governors are trying to get what they need from the federal government – and fast. But often that means navigating the disorienting politics of dealing with President Donald Trump. (AP Photo/Charles Rex Arbogast)

Newsom Complimented Trump for ‘His Focus on Treatments’ for the Virus

“We are doing very well with, I think, almost all of the governors, for the most part,” he said during a town hall on Fox News on Tuesday. “But you know, it’s a two-way street. They have to treat us well.”

On a private conference call with Trump Thursday, governors from both parties pressed the president for help — some more forcefully than others.

As Washington Gov. Jay Inslee, a Democrat, urged Trump to use his full authority to ramp up production of necessary medical equipment, Inslee invoked a football star and one of the president’s most famous friends. Be like Tom Brady, Inslee said, and less like a “backup quarterback,” according to an official who was on the call who was not authorized to discuss the meeting.

West Virginia Gov. Jim Justice, a Republican, meanwhile, was lavish in his praise.

“We’re just so appreciative, but we really need you,” Justice said.

California’s Gavin Newsom, usually a fierce Trump critic, is among those who have gone out of their way not to lay the federal government’s failings during the coronavirus outbreak at Trump’s feet.

Newsom complimented Trump for “his focus on treatments” for the virus and thanked him for sending masks and gloves to California. He said the president was “on top of it” when it came to improving testing and said Trump was aware “even before I offered my own insight” of the state’s need for more testing swabs.

Trump has kept a close eye on the coronavirus media coverage and noted which local officials were praising or criticizing him, according to three aides who spoke on condition on anonymity because they were not authorized to publicly discuss the president’s private deliberations. In conversations, Trump has blasted Whitmer and praised Newsom, they said.

There’s no evidence that Trump has held up a governor’s request for assistance for personal or political reasons. Still aides say it’s understood that governors who say nice things about the federal response are more likely to be spared public criticism from the White House or threats of withheld assistance.

Trump approved California’s request for a statewide disaster declaration within hours of Newsom asking on Sunday. Trump also has sent a Naval medical ship as well as eight field hospitals. New Jersey will be getting four field hospitals after a phone call between the president and Democratic Gov. Phil Murphy, who has not criticized the president during the crisis.

Republican governors are navigating particularly difficult waters, knowing that any comments viewed as critical of the president could anger Trump’s loyal fans in their state. Some Republicans spoke out against Trump’s talk of reopening the U.S. economy by Easter in mid-April. Gov. Larry Hogan of Maryland, head of the nonpartisan National Governors Association, called the White House messaging “confusing.”

GOP Gov. Mike DeWine of Ohio, who lead on the early action, described himself as “aligned” with Trump, but then also noted the state’s model did not show cases peaking until May 1. DeWine appealed to Ohioans to continue to stay home to limit the spread of the virus.

Those close to DeWine say he understands the importance of picking his battles.

“I think he recognizes this unprecedented once-in-a-century situation is bigger than politics,” said Ryan Stubenrauch, a former DeWine policy and campaign staffer.

It’s unusual to see a president and governors publicly feuding and name-calling while their country teeters on the brink of disaster. In past recent crises, presidents and state leaders have gone out of their way to show that politics plays no role in disaster response, and to project the appearance of cooperation. In 2005, as Republican President George W. Bush’s administration received criticism for its handling of Hurricane Katrina in New Orleans, there was never a sense he was withholding help for personal reasons, said former Sen. Mary Landrieu, D-La. 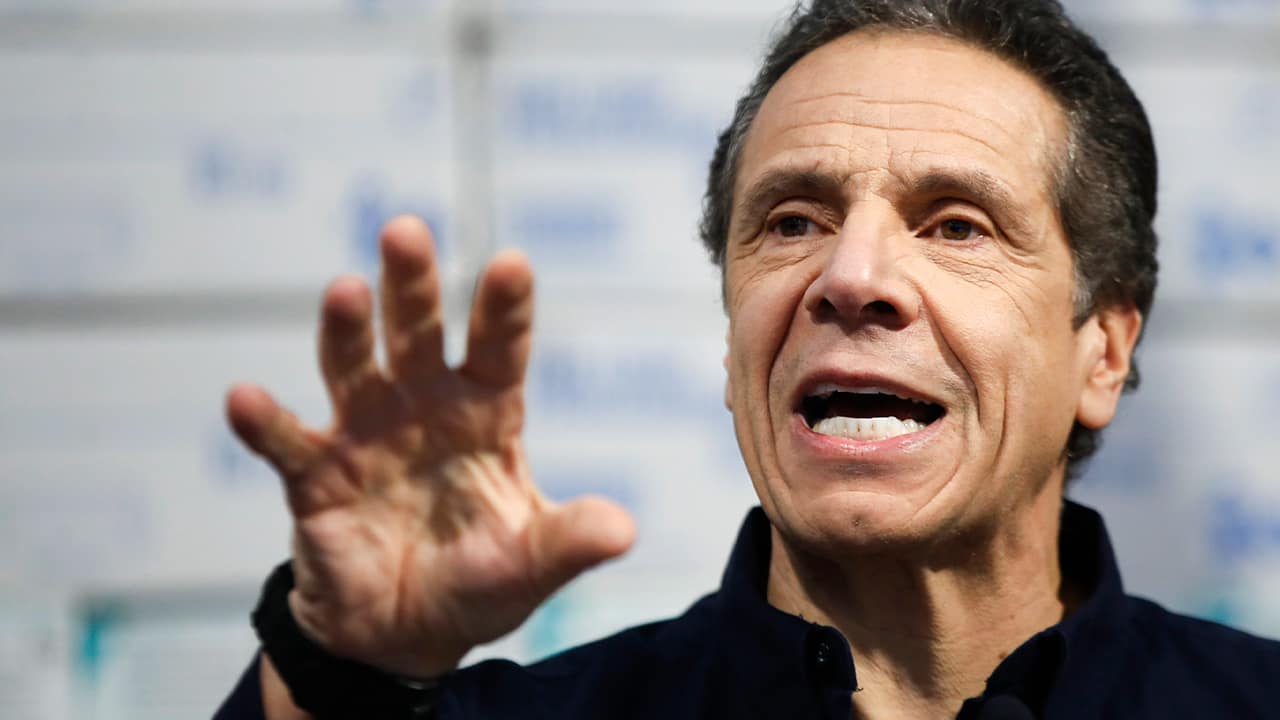 In this March 24, 2020 photo, New York Gov. Andrew Cuomo speaks during a news conference against a backdrop of medical supplies at the Jacob Javits Center that will house a temporary hospital in response to the COVID-19 outbreak in New York. Amid an unprecedented public health crisis, the nation’s governors are trying to get what they need from the federal government – and fast. But often that means navigating the disorienting politics of dealing with President Donald Trump. (AP Photo/John Minchillo)

“I never had to worry that President Bush would be angry with me, personally, so he wouldn’t help the people of my state,” she said. “I knew he wasn’t a petty leader.”

In this moment, some governors have zigzagged between compliments and confrontation, knowing the president responds to both. When Gov. Andrew Cuomo, D-N.Y., was frustrated last week that Trump had not stepped up the federal response to hard-hit regions, he tried a counterintuitive approach, going on cable news to praise Trump for changing his tone about the severity of the virus.

In a call to the White House, Cuomo delivered the same grateful message privately, according to two officials with knowledge of the conversation who spoke on condition of anonymity because they were not authorized to publicly talk about the private discussions.

Trump later expressed happiness to aides and advisers that Cuomo had said such nice things about him, according to two White House officials and Republicans close to the West Wing.

A week later, when Cuomo delivered an urgent, frustrated plea for ventilators Tuesday, he didn’t mention Trump by name. Shortly after, a White House official said 4,000 more ventilators would be shipped to New York.

But later that day, Trump vented to aides, complaining that Cuomo made it seem like Washington had abandoned him, according to those White House officials and Republicans.

His anger broke through during the town hall. When Dr. Deborah Birx, the coordinator for the coronavirus response, was describing testing problems and mentioned New York’s high transmission rate, Trump interjected, trying to push Birx to criticize Cuomo: “Do you blame the governor for that?”