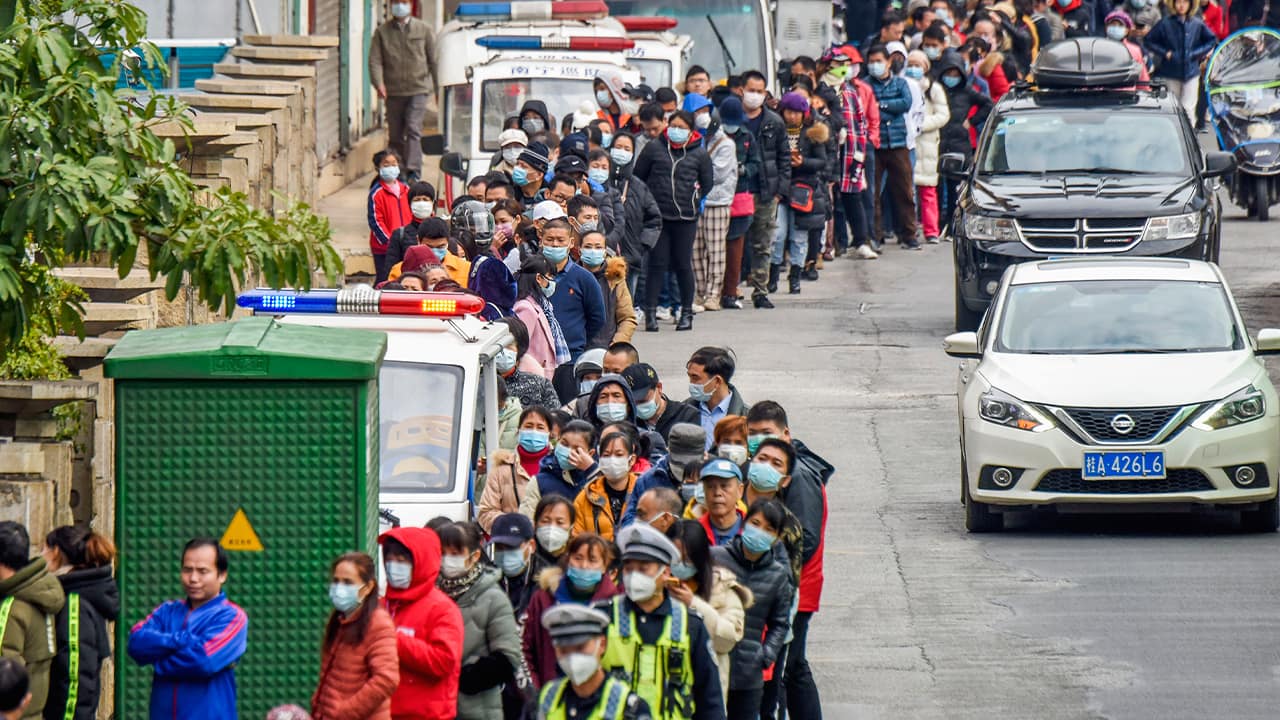 WASHINGTON — President Donald Trump had plenty to talk about during his latest big campaign rally, regaling a friendly crowd in New Jersey with his thoughts about impeachment, the economy, the border wall, local politics and much more.

Keeping With the Low-Profile Approach

Later Wednesday, Trump tweeted out photos from a briefing on the virus he attended with administration officials in the Situation Room, writing that “we have the best experts anywhere in the world and they are on top of it 24/7!”
In keeping with the low-profile approach, the White House announced by email Wednesday night that the meeting included members of a task force that will lead the U.S. response to the new virus. The 12-person team is chaired by Secretary of Health and Human Services Alex Azar and coordinated through the National Security Council.
The president’s comments contrast sharply with the fierce criticism he lobbed at his predecessor, President Barack Obama, during the 2014-15 Ebola crisis, which left more than 11,000 dead in three West African nations.
At the time, Trump ripped into Obama as a “dope” and “incompetent” and called for a travel ban on visitors from Ebola-infected countries. Trump also advocated preventing infected American health care workers from coming home for treatment.
Obama faced some criticism from public health officials for being slow to address the Ebola crisis initially, but also received plaudits for eventually attacking it with vigor. He nudged Congress to make a $5.4 billion emergency appropriation to aid the fight and sent 3,000 U.S. troops to West Africa to help with the international response.
Lawrence Gostin, a professor of global health law at Georgetown University, said he’s taken a measure of comfort in the fact that Trump, so far, hasn’t overreacted and has resisted “fanning the flames” as he did with his rhetoric during the Ebola crisis. That leaves room, Gostin said, for public health professionals to take the lead. In this Jan. 28, 2020 photo, a worker wearing a protective suit sprays disinfectant in a neighborhood in Qingdao in eastern China’s Shandong Province. (Chinatopix via AP)

“As long as that continues and as long as there isn’t political interference or mass quarantines in the U.S. or outright travel bans, I will feel comfortable with how the White House is handling it,” Gostin said. He added that he’d like to see Trump ask Congress for a $1 billion emergency appropriation to help agencies battling to contain the virus.


“As long as that continues and as long as there isn’t political interference or mass quarantines in the U.S. or outright travel bans, I will feel comfortable with how the White House is handling it.” — Lawrence Gostin, a professor of global health law at Georgetown University
Trump is well aware the virus outbreak in China could create a wild card for the U.S. economy during an election year. And he has long prioritized the U.S. economic relationship with China, especially during trade negotiations, and similarly largely held his tongue during widespread protests in Hong Kong. He also takes enormous pride in the personal relationship he’s developed with Xi and has commended him for demonstrating “transparency” as he deals with the crisis.
Trump said “we have it totally under control” when he was asked about the new type of coronavirus while in Switzerland last week to attend an economic conference. And in a separate Twitter posting, he offered reassurance but scant detail for his confidence.
“China has been working very hard to contain the Coronavirus,” Trump tweeted. “The United States greatly appreciates their efforts and transparency. It will all work out well.”
But some public health experts say Trump’s rosy assessments of the situation don’t match the ground truth.
Gostin pointed to Chinese government bureaucratic delays that led to tens of thousands of people traveling outside of Wuhan province, increasing the likelihood that the virus will travel far beyond China.
“It’s not accurate at all,” Gostin said of Trump’s assessment of China’s handling of the outbreak. “China manifestly does not have this under control.”

The Rapid Response Fund Has Proved Its Worth Twice

Trump’s budgets have proposed cuts to public health, only to be overruled by Congress, where there’s strong bipartisan support for agencies like the Centers for Disease Control and Prevention. Indeed, the money government disease detectives are tapping to fight the latest outbreak was a congressional idea.
The Department of Health and Human Services has accessed a $105 million fund lawmakers created to counter emerging threats from infectious diseases. That helps scientists to immediately deploy to help contain the outbreak, work on devising treatments for the virus, and investigate potential vaccines.
Rep. Tom Cole, R-Okla., an original sponsor of the idea, said the rapid response fund has proved its worth twice since it was set up in 2018. It was also tapped to help confront the most recent Ebola virus outbreak in Africa.
Trump’s Democratic presidential rivals have zeroed in on the president’s efforts to reduce financing for public health organizations.
Former Vice President Joe Biden and others have criticized Trump for eliminating a senior director position for global health security and biothreats at the National Security Council earlier in his term. Trump has also repeatedly sought budget cuts to the CDC and the National Institutes for Health.
Congress resisted that, and the 2020 budget includes $8 billion for the CDC, $1.4 billion more than Trump’s budget request. It also includes $41.7 billion for the NIH, $7.5 billion more than Trump’s budget request.
Biden wrote in an opinion article for USA Today this week that the “possibility of a pandemic is a challenge Donald Trump is unqualified to handle as president.” Massachusetts Sen. Elizabeth Warren, another Democratic contender for the 2020 nomination, tweeted that after the Ebola outbreak, Congress “invested to prevent pandemics like coronavirus. Donald Trump tried to cut that funding.”