MEXICO CITY — Mexican President Andrés Manuel López Obrador prayed for the safety of the country with the relatives of nine U.S. dual citizens slaughtered in northern Mexico last month and assured them “at least four” suspects have been detained, a family member said.

“We just bowed our heads [and] prayed for the president and the country, for peace and goodwill, and to protect our loved ones, and protect our country.” — Julian LeBaron

Julian LeBaron said that during the family’s Monday meeting with López Obrador and his Cabinet at Mexico City’s National Palace, the president pledged to visit the region where the Nov. 4 massacre took place.

Related Story: How the Gunfights in North Mexico That Left 23 Dead Unfolded

Mexican politicians traditionally avoid open displays of faith, and López Obrador has been unusual in recent comments referring to himself as a “follower of Jesus Christ.”

“We just bowed our heads” and “prayed for the president and the country, for peace and goodwill, and to protect our loved ones, and protect our country,” LeBaron said Tuesday.

The extended LeBaron family has lived in northern Mexico for decades and identify as part of the Mormon tradition though they are not affiliated with the Church of Jesus Christ of the Latter-day Saints. Dual nationals, they were hotly criticized by some for asking U.S. President Donald Trump to designate Mexican drug cartels as terrorist organizations, something Trump said he would do.

“We think we should all be humble enough, and that’s something we discussed with the president, to recognize that we have an immense problem on our hands and we need help,” LeBaron said. “Of course, we wouldn’t like to see a military invasion.” 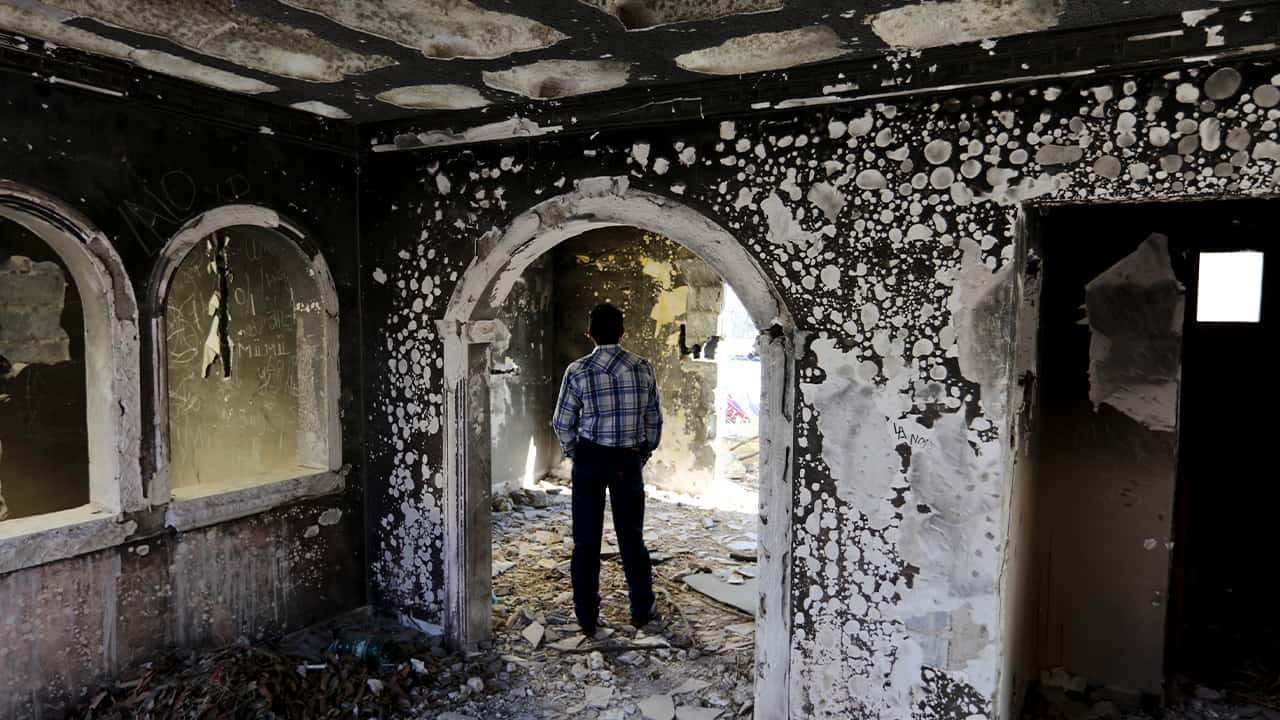 A former policeman walks through an abandoned home, torched by the Zetas cartel eight years back, in Allende, Coahuila state, Mexico, Tuesday, Dec. 3, 2019. In an act of revenge cartel members in 2011 razed and burned houses and disappeared people just by bearing the last name of the alleged traitor. Residents of the small town of Villa Union, 12 miles from Allende, said Tuesday that they fear a return to the days of 2010-2013, when the old Zetas cartel killed, burned and abducted Coahuila citizens. (AP Photo/Eduardo Verdugo)

LeBaron Is Now Trying to Press for Local Anti-Crime Organizing

Three young mothers and six children were killed in the attack near the border of the northern states of Sonora and Chihuahua. Officials have said a drug cartel is suspected in the attack, but they initially suggested that one of the mothers’ vehicles was set afire unintentionally, when a bullet hit the gas tank.

“We’ve been invaded by criminal terrorist organizations within our own country, within our own communities, and our government has absolutely failed to stop the thugs. At some point we have to assume responsibility as citizens to put a stop to it.” — Julian LeBaron

LeBaron said officials have confirmed to them that the killers filmed the attack themselves and set fire to the SUV in which one mother — LeBaron’s cousin — and her four children died. He said family members have seen the video.

LeBaron is now trying to press for the kind of local anti-crime organizing that his community in Chihuahua state put together in 2009 after a previous attack by drug cartel gunmen.

“We’ve been invaded by criminal terrorist organizations within our own country, within our own communities, and our government has absolutely failed to stop the thugs,” said LeBaron. “At some point we have to assume responsibility as citizens to put a stop to it.”

“The whole western United States was basically built on a structure that worked for communities, what we call the Wild West was never the wild West,” he said. “Within the community they basically had all the powers to hold people accountable. The whole town could be deputized to bring criminals before justice.”