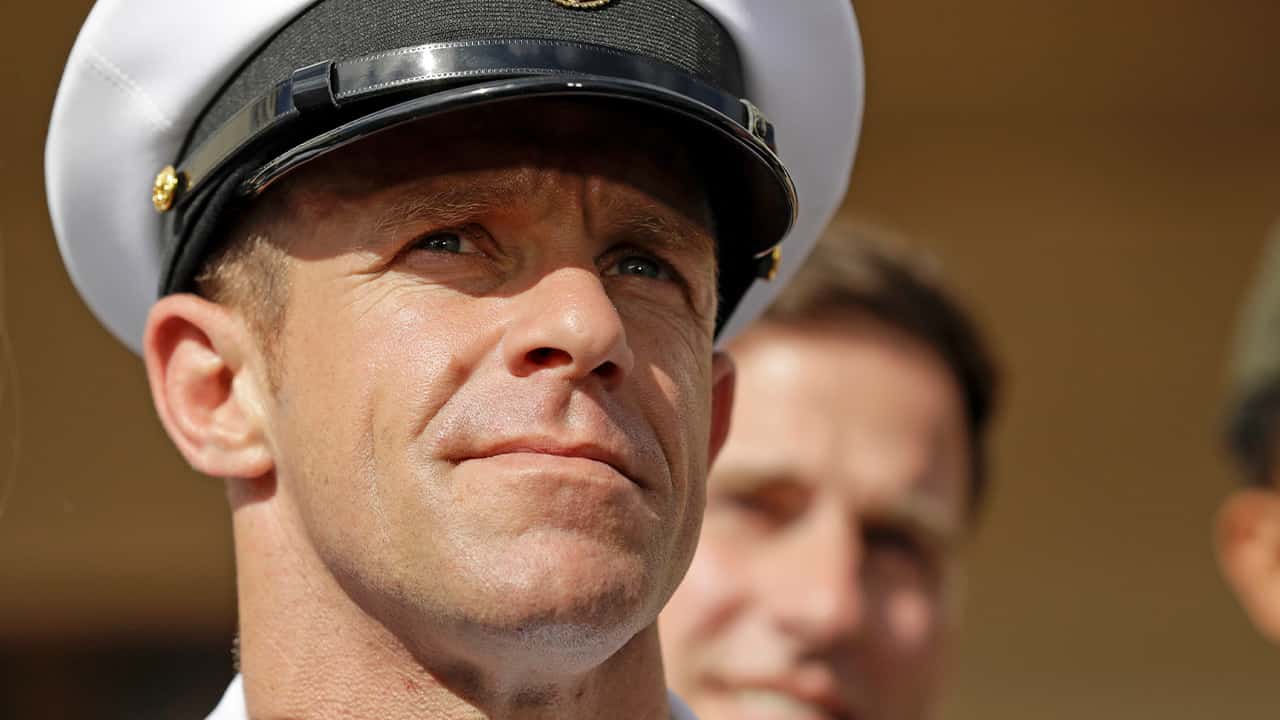 WASHINGTON — President Donald Trump insisted Thursday that the Navy “will NOT be taking away Warfighter and Navy Seal Eddie Gallagher’s Trident Pin,” inserting himself into an ongoing legal review of the sailor’s ability to hold onto the pin that designates him a SEAL.


Related Story: Navy SEAL Acquitted of Murder in Killing of Captive in Iraq

The Navy on Wednesday notified Chief Petty Officer Edward Gallagher that he will face a review early next month to determine if he should remain on the elite force.
Gallagher was acquitted of a murder charge in the stabbing death of an Islamic State militant captive, but a military jury convicted him of posing with the corpse while in Iraq in 2017. He was then demoted to chief.
His lawyers have accused the Navy of trying to remove the SEAL designation in retaliation for Trump’s decision last week to restore Gallagher’s rank.
Trump tweeted on Thursday that, “This case was handled very badly from the beginning” and he urged those involved to “Get back to business!”

The Navy will NOT be taking away Warfighter and Navy Seal Eddie Gallagher’s Trident Pin. This case was handled very badly from the beginning. Get back to business!

Gallagher filed a complaint with the inspector general accusing a rear admiral of insubordination for defying Trump’s actions. Rear Adm. Collin Green is the Naval Special Warfare commander.
Two U.S. officials familiar with the case but not authorized to speak publicly said Wednesday that discussions about convening a review board began shortly after Gallagher’s conviction in July. They said the decision was not in reaction to Trump’s decision to restore Gallagher’s rank.

It’s unclear what effect Trump’s tweet could have on the process and whether he can actually block the review from taking place or overturn any decision made.
Under the review procedure, a five-person board will convene Dec. 2 behind closed doors. It will include one SEAL officer and four senior enlisted SEALs, according to the two U.S. officials. Gallagher can appear once before the board on Dec. 4 but without his lawyers. He can dispute the evidence given to the board that will include his conviction and call witnesses.
Gallagher can appeal any final decision that will be made by the Naval Personnel Board, which will take into account Green’s input and the board’s recommendations.
Trump’s initial order in Gallagher only referred to restoring his rank, but did not explicitly pardon the SEAL for any wrongdoing.
Green also notified three SEAL officers who oversaw Gallagher during the deployment — Lt. Cmdr. Robert Breisch, Lt. Jacob Portier and Lt. Thomas MacNeil — that they are also being reviewed, according to the officials.
Removing their Trident pins means they will no longer be SEALs but could remain in the Navy.
The Navy has revoked 154 Trident pins since 2011.

School Bond Backers Have Some Selling to Do, Poll Shows