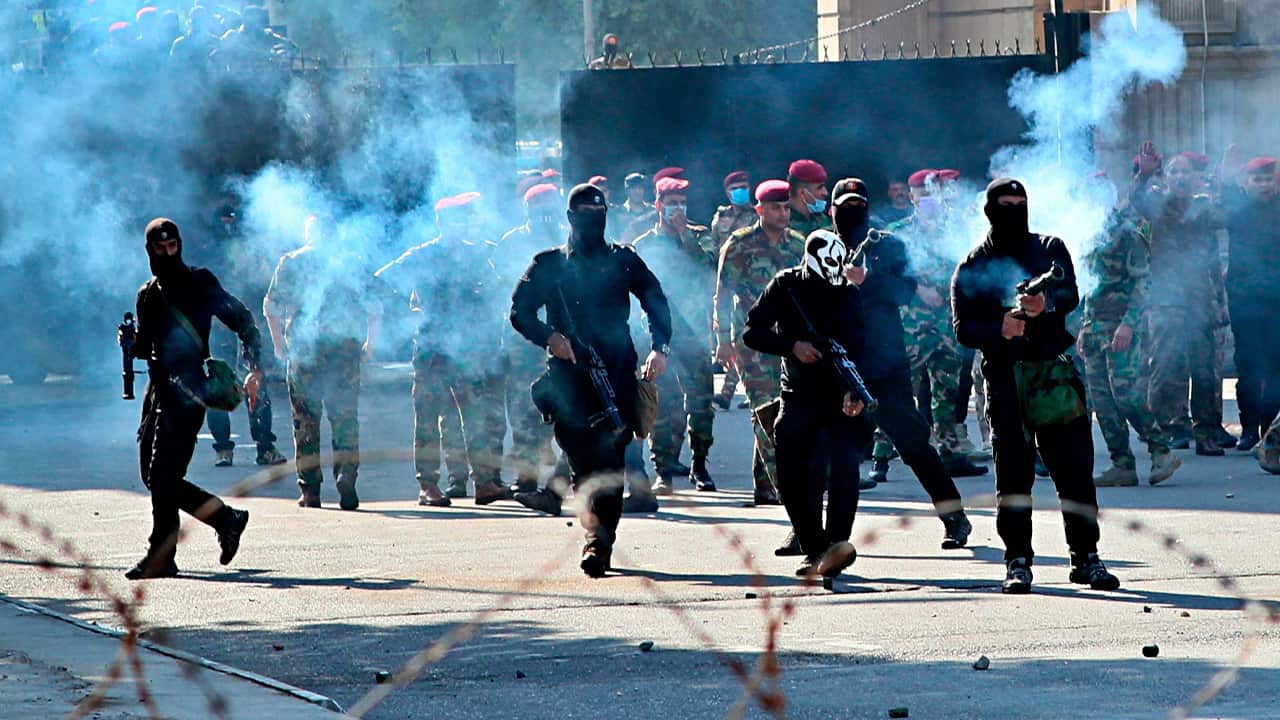 
“They (leaders) have eaten away at the country like cancer. They are all corrupt thieves.” — Abu Ali al-Majidi
The confrontations began early in the morning after anti-government demonstrations resumed, following a three-week hiatus. The protests began Oct. 1 over corruption, unemployment and lack of basic services but quickly turned deadly as security forces cracked down, using live ammunition for days.
The protests then spread to several, mainly Shiite-populated southern provinces and authorities imposed a curfew and shut down the internet for days in an effort to quell the unrest.
After a week of violence in the capital and the country’s southern provinces, a government-appointed inquiry into the protests determined that security forces had used excessive force, killing 149 people and wounding over 3,000. It also recommended the firing of security chiefs in Baghdad and the south. Eight members of the security forces were also killed.
The protests are similar to those that have engulfed Lebanon in recent days in that they are economically driven, largely leaderless and spontaneous against a sectarian-based system and a corrupt political class that has ruled for decades and driven the two countries to the brink of economic disaster.
The protests in Iraq threaten to plunge the country into a new cycle of instability that potentially could be the most dangerous this conflict-scarred nation has faced, barely two years after declaring victory over the Islamic State group.
“They (leaders) have eaten away at the country like cancer,” said Abu Ali al-Majidi, 55, pointing in the direction of the Green Zone. “They are all corrupt thieves,” he added, surrounded by his four sons who had come along for the protest. An injured protestor is rushed to a hospital during a demonstration in central Baghdad, Iraq, Friday, Oct. 25, 2019. Iraqi police fired live shots into the air and tear gas on Friday to disperse thousands of protesters on the streets of Baghdad, where planned anti-government demonstrations resumed after a three-week hiatus. (AP Photo/Hadi Mizban)

Subsequently, Iraqi security forces and government officials vowed to avoid further deadly violence and deployed heavily on the streets of Baghdad in anticipation of Friday’s protests.
Thousands of people began converging to Baghdad’s central Tahrir Square early Friday, carrying Iraqi flags and posters calling for change and reform.
However, after thousands of protesters removed metal security barriers and crossed the Jumhuriyya Bridge leading to Baghdad’s heavily fortified Green Zone, home to the U.S. Embassy and Iraqi government offices, soldiers fired tear gas to disperse them. After they tried to remove concrete barriers near the entrance of the Green Zone, they fired live rounds to push the protesters back.
“Baghdad hurra hurra, fasad barra barra!” the demonstrators chanted, Arabic for “Baghdad is free, corruption is out.”

Riot police in full gear and armed soldiers lined the bridge. Ambulances and tuk-tuks zipped back and forth, ferrying the injured to hospitals. A reporter for Iraq’s Sumariyya TV channel was among the injured.
Security and hospital officials said eight people were killed, five of them in Baghdad and three in the southern province of Nasiriyah. They said most of the deaths occurred as protesters were struck in the face by tear gas canisters and rubber bullets.
Hundreds of people were taken to hospitals, many with shortness of breath from the tear gas. The officials spoke on condition of anonymity in line with regulations.
Protests spread to the southern provinces later Friday, including the flashpoint city of Basra where some 4,000 people gathered near the provincial government building. The current round of protests has been endorsed by Iraq’s nationalist Shiite cleric, Muqtada al-Sadr, who has a popular Shiite support base and the largest number of seats in parliament. He has called on the government to resign and suspended his bloc’s participation in the government until it comes up with a reform program.


“I want my country back, I want Iraq back.” — Ban Soumaydai, an employee at the Iraqi Education Ministry
However, powerful Iran-backed Shiite militias have stood by the government and suggested the demonstrations were a “conspiracy” from the outside.
Iraq’s most senior Shiite spiritual leader, Grand Ayatollah Ali al-Sistani, appealed on the protesters and security forces to avoid violence and urged the demonstrators to abstain from attacking security forces or public property. In his Friday prayers sermon, he also criticized the government-appointed committee investigating the crackdown in the previous protests, saying it did not achieve its goals or uncover who was behind the violence.
As in the protests earlier this month, the protesters, organized on social media, started from the central Tahrir Square. The demonstrators, mostly young, unemployed men, carried Iraqi flags and chanted anti-government protests, demanding jobs, water and electricity.
“I want my country back, I want Iraq back,” said Ban Soumaydai, 50, an employee at the Iraqi Education Ministry, who wore black jeans, a white T-shirt and carried an Iraqi flag with the hashtag #We want a country, printed on it.
Prime Minister Adel Abdul-Mahdi has struggled to deal with the protests.
He gave an address to the nation in the early hours Friday, promising a government reshuffle next week and pledging reforms. He told protesters they have a right to peaceful demonstrations and called on security forces to protect the protests.
Related Topics:BaghdadcorruptiondemonstratorsIraqkilledprotesterstear gasunemployment
Up Next