LAS VEGAS — Visitors descending on the remote Nevada desert for “Storm Area 51” are from Earth, not outer space.

No one knows what to expect, but the two tiny towns of Rachel and Hiko near the once-secret military research site are preparing for an influx of people over the next few days.

“This phenomenon is really a perfect blend of interest in aliens and the supernatural, government conspiracies, and the desire to know what we don’t know.” — Michael Ian Borer, a University of Nevada, Las Vegas

“It’s happening. We already have people from all over the world,” Little A’Le’Inn proprietor Connie West said Wednesday from her bustling cafe and motel, where volunteers have arrived from Poland, Scotland, Australia, Florida, Idaho and Oklahoma.

Neighbors, elected officials and event organizers said the craze sparked by an internet joke inviting people to “see them aliens” might become a cultural marker, a monumental dud or something in between.

Area 51’s secrecy has long fueled fascination about extraterrestrial life, UFOs and conspiracy theories, giving rise to the events this week and prompting military warnings not to approach the protected site.

“This phenomenon is really a perfect blend of interest in aliens and the supernatural, government conspiracies, and the desire to know what we don’t know,” said Michael Ian Borer, a University of Nevada, Las Vegas, sociologist who researches pop culture and paranormal activity.

The result, Borer said, was “hope and fear” for events that include the “Area 51 Basecamp,” featuring music, speakers and movies, and two festivals competing for the name “Alienstock” starting Thursday.

Some neighbors and officials in two counties near Area 51 are nervous. The area of scenic mountains and rugged desert is home to a combined 50,000 people and compares in size with New England.

“We are preparing for the worst,” said Joerg Arnu, a Rachel resident who could see from his home a makeshift stage and cluster of portable toilets in a dusty area recently scraped of brush surrounding West’s little motel and cafe.

“Those that know what to expect camping in the desert are going to have a good time,” Arnu said. “Those who are looking for a big party are going to be disappointed.”

He predicts people showing up in the desert in shorts and flip-flops.

“That doesn’t protect you against critters, snakes and scorpions,” Arnu said. “It will get cold at night. They’re not going to find what they’re looking for, and they are going to get angry.”

Officials expect cellular service to be overwhelmed. The nearest gas station is 45 miles away. Campers could encounter overnight temperatures as low as 41 degrees.

“We really didn’t ask for this,” said Varlin Higbee, a Lincoln County commissioner who voted to allocate $250,000 in scarce funds to handle anticipated crowds. 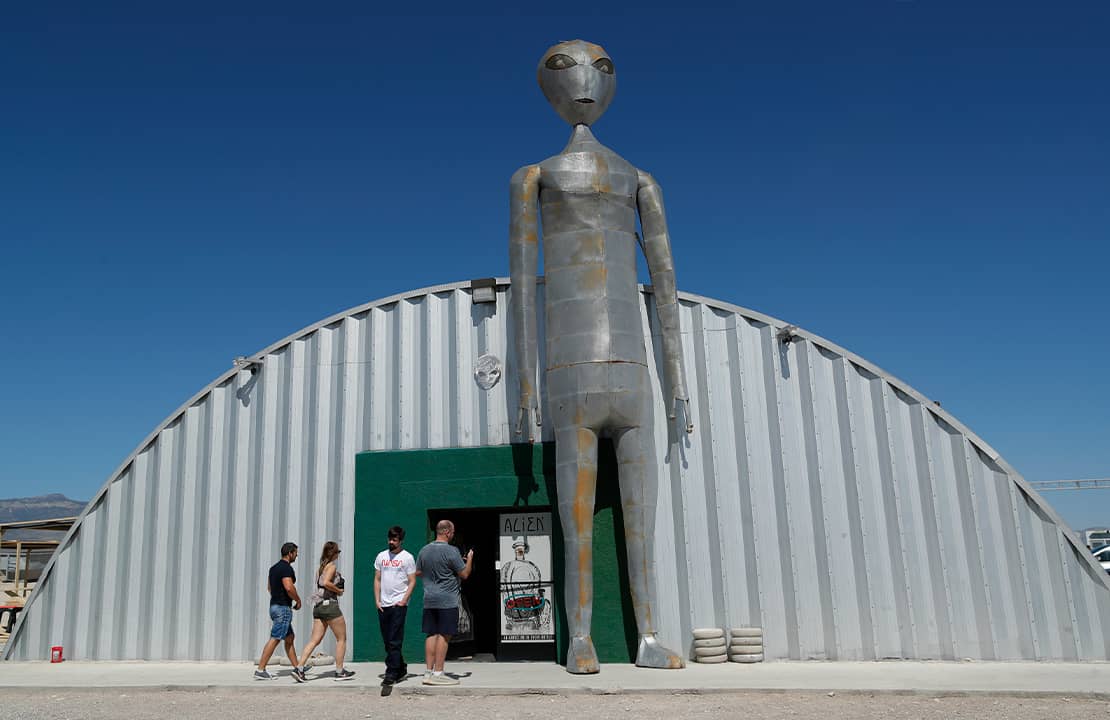 People enter and exit the Alien Research Center in Hiko, Nev. No one knows what to expect, but lots of people are preparing for “Storm Area 51” on Wednesday, Sept. 18, 2019, in the Nevada desert. Neighbors, elected officials and experts say the craze sparked by an internet joke inviting people to “”see them aliens” might become a cultural marker, a dud or something in-between. (AP Photo/John Locher)

“People desire to be part of something, to be ahead of the curve. Area 51 is a place where normal, ordinary citizens can’t go. When you tell people they can’t do something, they just want to do it more.” — Michael Ian Borer, a University of Nevada, Las Vegas

The Federal Aviation Administration closed nearby air space this week.

“People desire to be part of something, to be ahead of the curve,” said Borer, the sociologist. “Area 51 is a place where normal, ordinary citizens can’t go. When you tell people they can’t do something, they just want to do it more.”

The “Area 51 Basecamp” promises up to 60 food trucks and vendors, trash and electric service, and a robust security and medical staff.

Harris said he was prepared for up to 15,000 people and expected they would appreciate taking selfies with a replica of Area 51’s back gate without having to travel several miles to the real thing.

“It’s exactly the same,” Harris said. “We just want people to be safe. As long as they don’t go on the desert floor and destroy the ecosystem, everyone will have a good time.”

West, the motel owner, is planning an “Alienstock” Thursday through Sunday in Rachel, a town of about 50 residents a more than two-hour drive north of Las Vegas on a normally lonely road dubbed the Extraterrestrial Highway. She plans 20 musical acts, plus food vendors and souvenir sellers.

West said she refunded some camping reservations after Matty Roberts, who created the Facebook post, broke ties with her event. Roberts, 20, of Bakersfield, California, is supporting an “Alienstock” festival scheduled for Thursday at an outdoor venue in downtown Las Vegas.

Hundreds of Law Enforcement Officers and Medics Will Be on Hand

The U.S. Air Force has issued stern warnings for people not to approach the gates of the Nevada Test and Training Range, where Area 51 is located.

Area 51 tested aircraft ranging from the U-2 in the 1950s to the B-2 stealth bomber in the 1980s. The government spent decades refusing to acknowledge the site even existed, before releasing documents confirming it in 2013. Its secrecy still fuels speculation that it’s where the government studies aliens.

County lawmakers in Nye County, home to a conspicuously green establishment called the Area 51 Alien Center, are discouraging Earthlings from trying to find extraterrestrials there.

Her deputies last week arrested two Dutch tourists attracted by “Storm Area 51.” The men pleaded guilty to trespassing at a secure U.S. site nowhere near Area 51 and promised to pay thousands in fines.

Arnu said the military added razor wire to barbed cattle fencing on the Area 51 boundary near his home, installed more cameras and battery-powered lighting, and erected an imposing spike barrier just inside a gate. He noted a new sign telling trespassers they’ll be arrested and fined $1,000.

Hundreds of law enforcement officers and medics will be on hand, along with the Nevada National Guard.