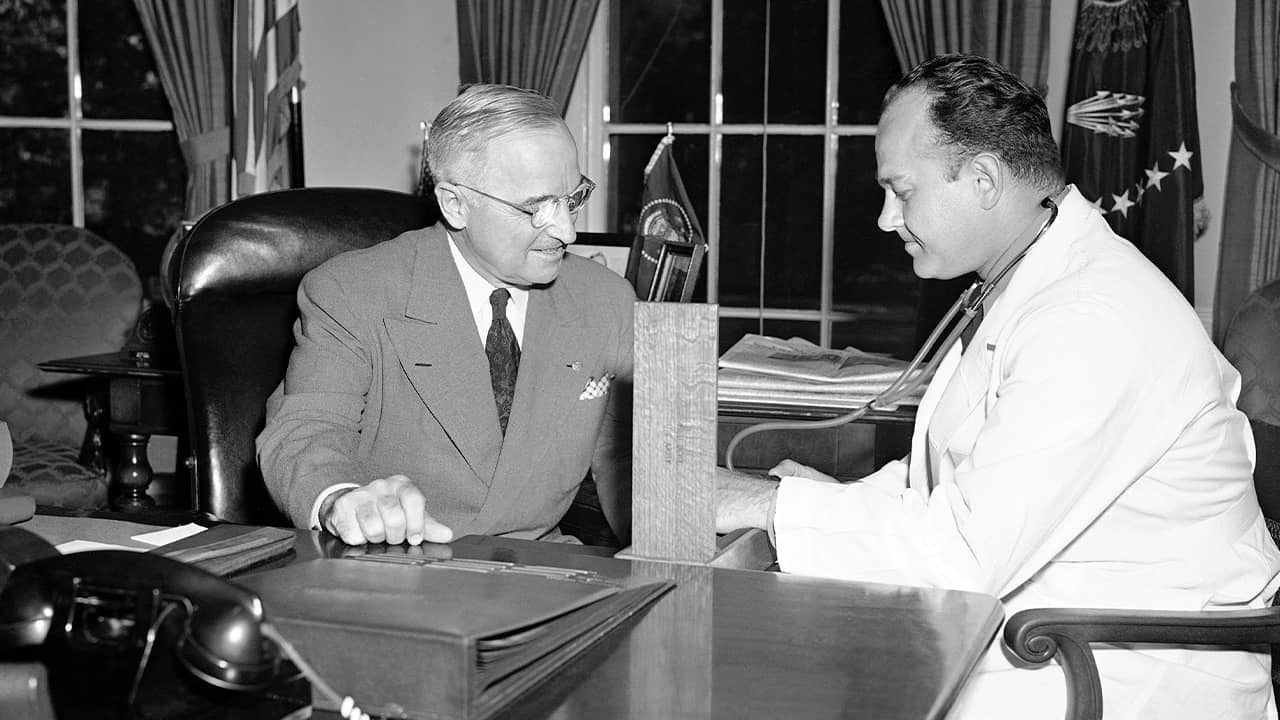 WASHINGTON — Seventy years ago, before Medicare existed to inspire “Medicare for All,” a Democratic president wrestled with a challenge strikingly similar to what the party’s White House hopefuls face today on the issue of health care.
Harry Truman, then in his fourth year of pressing for a national health insurance system, parried criticism of his approach in terms a single-payer health care advocate might use in 2019. The plainspoken Missourian wrote in a 1949 message to Congress that his proposal “will not require doctors to become employees of the government” and that “patients will remain free to choose their own doctors.”
Truman’s pitch fell short, and Democrats vying to take on President Donald Trump next year are still debating how to give Americans better health care without shattering a system that’s both flawed and familiar. And despite voters’ keen focus on health care, it’s not clear that the Democratic primary — where presidential contenders traded rhetorical blows on the issue last week — will leave its winner with a mandate to enact his or her vision.
That’s in part because, although polling shows most Democrats think the federal government has a responsibility to make sure all Americans have health care coverage, the party remains divided along age and ideological lines about the best approach. And even as the party’s leading White House hopefuls are bitterly at odds over solutions, congressional Democratic leaders are pursuing more consensus proposals to shore up the Affordable Care Act.
Democrats’ existential battle over health care, in other words, isn’t likely to end soon.
A single-payer insurance proposal gains appeal “the more dysfunctional and underperforming our current system gets,” said Ezekiel Emanuel, a veteran physician who helped shape the 2010 law known as Obamacare as an adviser in former President Barack Obama’s White House.

But, Emanuel advised against limiting Democrats to the most ambitious proposal on the table: the single-payer, government-run insurance plan backed by Vermont Sen. Bernie Sanders. There are alternate solutions more politically palatable to swing voters, he says.


A Democratic President in 2021 Unlikely to Have Senate Majority

Like former Vice President Joe Biden and Buttigieg, Spanberger supports the creation of a Medicare-like insurance plan sometimes dubbed the “public option.” That idea’s more centrist champions in the 2020 primary have resisted the notion that single-payer insurance is the party’s only transformative choice.
“There’s nothing moderate about what Barack did in Obamacare. Nothing,” Biden told reporters in Detroit after the debate.
Democrats must rely on moderates like Spanberger, however, in order to hold the House and win the Senate next year to make any major health care overhaul possible. That would leave even a single-payer stalwart like Sanders or Warren, if one of them wins the presidency, battling for consensus within their own party as they push for the shift. And any potential Democratic president in 2021 is very unlikely to have a Senate majority as sizable as the one Obama had nearly a decade ago, when his White House had to abandon a public option.
For some key architects of Obamacare, the calls for Medicare for All ignore the political gantlet they had to run to enact the current system, which remains under legal threat from the Trump administration.
When Obama abandoned his own public option effort in 2010, for example, his party had a sizable Senate majority that any potential Democratic president would be lucky to have in 2021.
“I don’t think anything’s changed” about the difficulty of winning congressional support for a public option plan since 2010, said Nancy-Ann DeParle, a top health care adviser in Obama’s White House who is now a partner in a health care-focused investment firm.

Former Rep. Henry Waxman, who helped shape Obamacare during his four decades in Congress, said that adding a public option would be “a wise step and a doable step, but it’s not going to be easy, even if we had President Biden and a Democratic Congress.” The California Democrat dismissed single-payer insurance as “like a gold ring to be held out in the distance as a desired outcome, just like the coming of the Messiah would be a wonderful opportunity.”