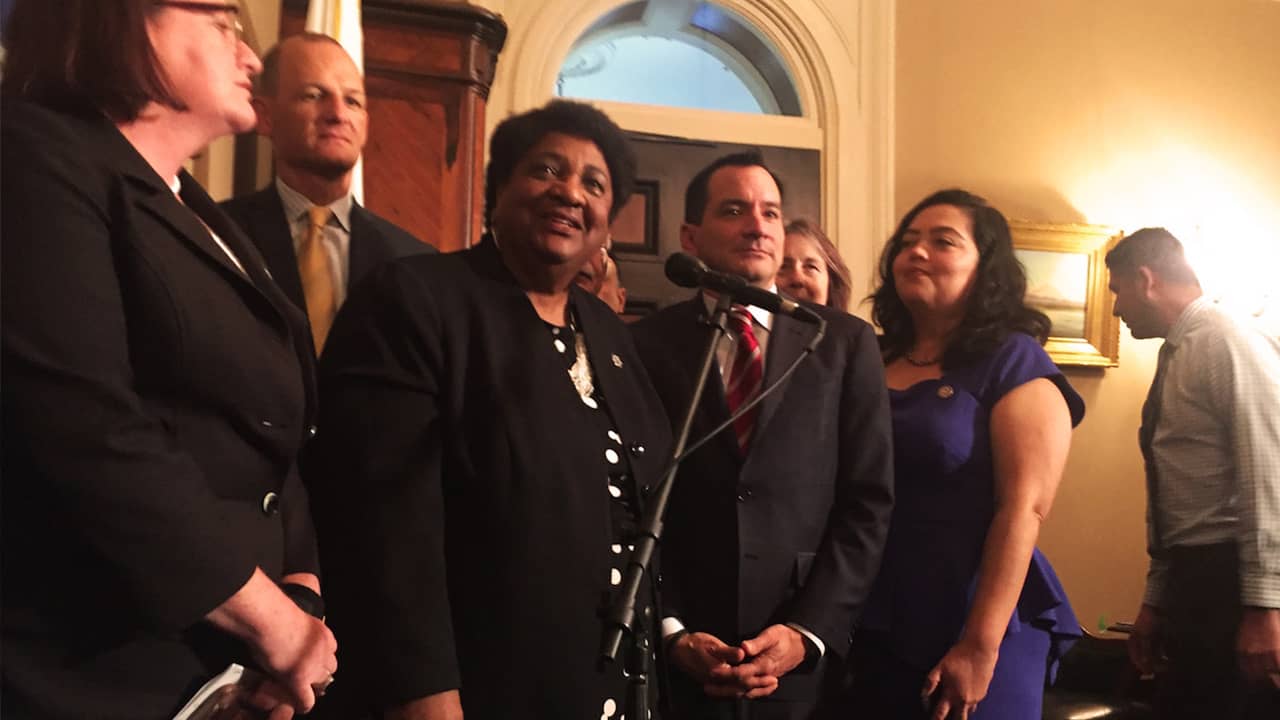 For an hour and a half Wednesday morning, California lawmakers lined up to speak for or against (but mostly for) one of the most high-profile bills of the year. One member of the Assembly, a former state cop, choked back tears as he wrestled with the implications of his vote.

But when the rolls opened on AB392, which would make it harder for police to legally justify killing a civilian, the tally wasn’t close. The Assembly passed the bill, 68 to 0, with 12 members abstaining.

Wednesday’s vote pushes California one step closer to enacting use-of-force standards that would be among the strictest in the country. If AB392 is signed into law, police would only be able to use lethal force if “necessary” to defend human life.

The current standard, established by the U.S. Supreme Court, allows the lethal use of force if the split-second decision to pull the trigger is “reasonable.”

Introduced by Assemblywoman Shirley Weber from San Diego, the bill is a product of a long political tug-o’-war. On one side are criminal justice advocates, including the American Civil Liberties Union, which has argued that current law allows police officers to justify all but the most flagrant misconduct. On the other are law enforcement groups, which have said that a stricter use-of-force standard would allow prosecutors to second-guess difficult policing decisions in often dangerous situations.

But most of the state’s major law enforcement groups are no longer actively opposing the bill, the result of an amendment last week. An earlier version of the bill defined “necessary” use of force as lacking any “reasonable alternative,” but that phrasing was stripped. Police groups argued that the “no reasonable alternative” would give prosecutors too much leeway to question every decision after the fact.

At a news conference after the vote, Weber insisted that the amendments had not substantially weakened the bill’s civil liberty safeguards. But the change seems to have helped clear the way for Wednesday’s vote among officials ordinarily allied with law enforcement, with most moderate Democrats and 9 of the chamber’s 19 Republicans voting in favor.

“In my entire elected experience never has a bill consumed my thinking as this has,” said Assemblyman Tom Lackey, a Republican and former California Highway Patrol officer, who paused a number of times throughout his speech to collect himself.

Related Story: California Might Get One of the Nation’s Toughest Police Use-of-Force ...

He recalled a former colleague, “someone who was a very big part of my life,” who had killed someone while in the line of duty and, struggling with the guilt, later took his own life. But Lackey said that he would support the bill because he argued, it offered a balanced approach.

Jim Gallagher, a Republican from Yuba City, also spoke in favor of the bill, saying that with the new amendments it represents a “reasonable compromise.”

Devon Mathis, a Republican from Visalia, was initially the only Republican to vote “no” before switching his vote to an abstention. He argued that a lack of respect for police officers was the source of many civilian killings.

“We teach our youth ‘no means no,’” he said. “But when are we going to teach them, ‘stop means stop,’ ‘freeze means freeze’?”

That argument prompted a fierce response from Assemblyman Mike Gipson, a Democrat from Compton.

“I listen to all of you with your commentaries and words, but you don’t have to have my kind of experience,” said Gipson, who is African American, his voice reverberating around the chamber. “You don’t live where I live or grow up where I grew up.”

“I listen to all of you with your commentaries and words, but you don’t have to have my kind of experience. You don’t live where I live or grow up where I grew up.” — Assemblyman Mike Gipson

Weber, also an African American, said that the bill was part of a “400-year challenge” for racial justice in the United States. She closed by dedicating the bill to her two grandchildren. When the vote was called, criminal justice advocates stood in the balcony and sang “This Land is Your Land.”

The bill now progresses to the Senate, where a similar version of the proposal died in committee last year. But this time around, the bill has the public support of the Democratic President Pro Tem Toni Atkins of San Diego, who stood beside Weber at Wednesday’s news conference.

Learn more about these two bills and about the legal, political and human dimensions of this debate by subscribing to Laurel Rosenhall’s podcast, Force of Law.