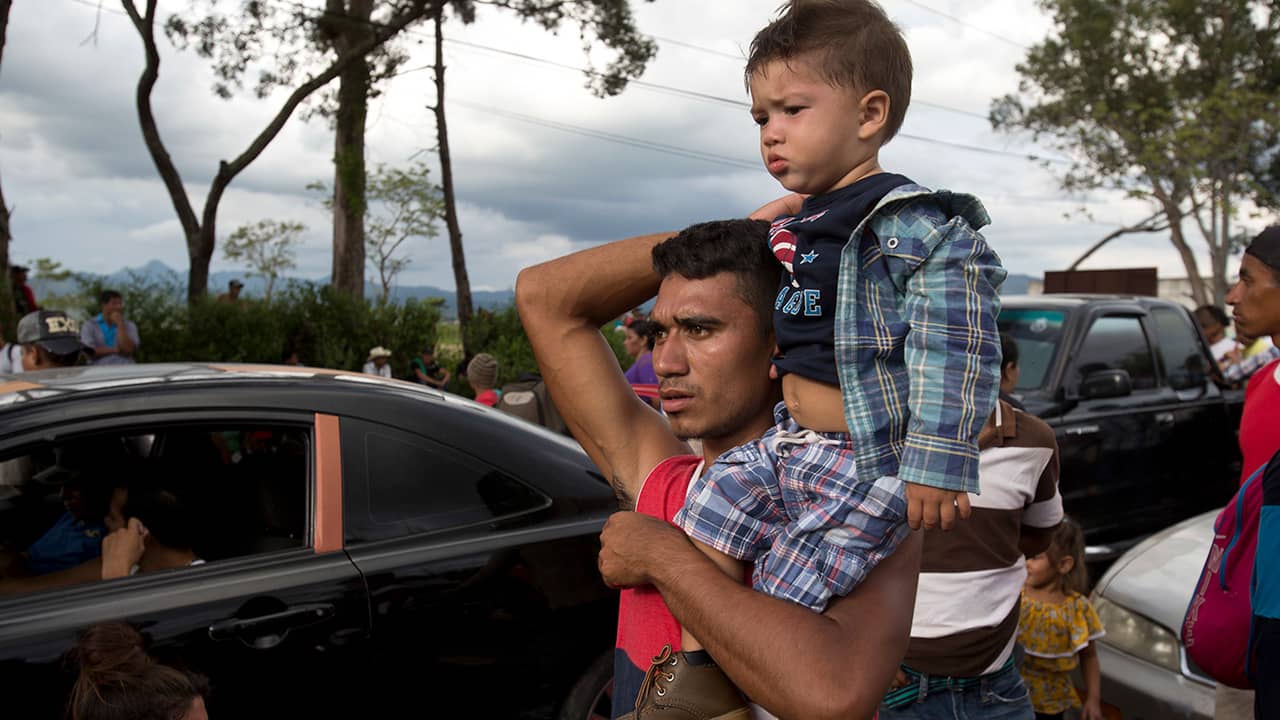 ESQUIPULAS, Guatemala — Hundreds of Hondurans hoping to reach the United States bedded down for the night in the Guatemalan town of Esquipulas after that country’s authorities blinked first in attempts to halt their advance.
U.S. President Donald Trump, meanwhile, threatened on Tuesday to cut aid to Honduras if it doesn’t stop the impromptu caravan of migrants.
“The United States has strongly informed the President of Honduras that if the large Caravan of people heading to the U.S. is not stopped and brought back to Honduras, no more money or aid will be given to Honduras, effective immediately,” Trump tweeted Tuesday.

The United States has strongly informed the President of Honduras that if the large Caravan of people heading to the U.S. is not stopped and brought back to Honduras, no more money or aid will be given to Honduras, effective immediately!

The group estimated at 1,600 to 2,000 people fleeing poverty and violence in Honduras marched into Guatemala in sweltering heat Monday, twice pushing past outnumbered police sent to stop them — first at the border and then at a roadblock just outside Esquipulas.
After those encounters, Mexico’s immigration authority sent out a fresh warning late Monday that the migrants would have to satisfy Mexican officials individually and that only those meeting requirements would be allowed to enter.

Hundreds of People Fleeing Poverty and Violence in Honduras

But it remains unclear if governments in the region — many of whose own people are migrants — can summon the political will to physically halt the determined border-crossers. Honduras’ ability to stop the caravan also may be limited because it has already moved into Guatemala.

One Migrant Moving After She Was Threatened With Death

Keilin Umana, a 21-year-old who is two months pregnant, said she was moved to migrate to save herself and her unborn child after she was threatened with death.


“Every day I earn about $5. That isn’t enough to feed my family.” — Carlos Cortez, Honduran migrant
Umana, a nurse, said she had been walking for four days. “We are not criminals — we are migrants,” she said.
Many in the caravan traveled light, with just backpacks and bottles of water. Some pushed toddlers in strollers or carried them on their shoulders.
Carlos Cortez, a 32-year-old farmer traveling on foot with his 7-year-old son, said poverty back home made it impossible to support a family.
“Every day I earn about $5,” Cortez said. “That isn’t enough to feed my family.”
The caravan was met at the border by about 100 Guatemalan police officers. After a standoff of about two hours, the migrants began walking again. Officers did nothing to stop them, but accompanied them several miles (kilometers) into Guatemalan territory.
Officers then set up the roadblock about a mile outside Esquipulas. About 250 police kept them from advancing for three hours, telling them they had to return to the border to go through immigration. The migrants refused to budge and eventually officers again let them pass.

The caravan began as about 160 people who first gathered early Friday to depart from San Pedro Sula, one of Honduras’ most dangerous places, figuring that traveling as a group would make them less vulnerable to robbery, assault and other dangers common on the migratory path through Central America and Mexico.

Did Tuck's Ad on Prisons vs. Schools Rile Corrections Officers?