“No Union. No Union.”
That was the refrain from ALRB field examiner Veronica Cervantes as she read off ballots Tuesday from a 2013 election asking Gerawan Farming workers whether they wanted United Farm Workers union representation.

At the end of the nearly five-hour count, 1,098 ballots indicated that Gerawan workers wanted the union gone and 197 wanted to keep the union. Another 653 ballots went uncounted because they were either invalid or challenged.
“Our employees have been waiting since November 2013 for their votes to be counted. After a historic struggle, they achieved that right today, in spite of the efforts by the UFW and the millions of taxpayer dollars spent by the ALRB to deny them that right,” Gerawan Farming said in a statement.
This was the latest step in a three-decade saga.
To recap briefly: The UFW organized Gerawan workers in Fresno County in the 1990s. According to the union, a contract could not be reached. Gerawan employees said they felt the UFW abandoned them. UFW denied this charge. The union returned in 2012 with its request for a labor deal. A year later, led by farmworker Silvia Lopez, Gerawan workers voted on whether to decertify the UFW as its union.
But before the vote tally, the ALRB impounded the ballots after the UFW alleged illegal tactics by Gerawan.
Earlier this year, the Fresno-based 5th District Court of Appeal ordered the ALRB to tally the votes. ALRB and UFW appealed. Last week, the state Supreme Court denied the appeal.
However, just because the votes are now tallied, it does not mean the election results will stand. The courts have not had a final say on the allegations of illegal activity during the vote by Gerawan.
Despite the vote results, the UFW feels they will prevail in the end.
“Relying upon counted ballots in an election hopelessly tainted by massive Gerawan lawbreaking would make a mockery of the democratic process. The ALRB still must consider whether a free and fair choice was prevented by multiple, serious and repeated violations of workers’ rights,” union spokesman Marc Grossman told GV Wire in an email. “Gerawan has also been found guilty of other, separate violations of the law, including engaging in bad-faith bargaining.”
The UFW cited prior examples of ALRB overturning voting results because of misconduct.
Which brings us to the present. About 60 people, from the media to politicians to the affected parties, gathered at the Hugh Burns Building in downtown Fresno.
Cervantes and two other ALRB officials gathered on a stage at the front of the room, flanked by observers from the UFW and Gerawan workers. First, Cervantes unsealed 21 envelopes containing the votes, depositing them into a container.
Then, she removed 634 yellow envelopes from the bin, denoting ballots contested at the time of the 2013 vote. Next, she began counting the remaining blue envelopes, announcing “union” or “no union.”
And, that’s how it went for most of the day.
“If your vote truly is your voice, then today is proof that the voices of thousands of California farmworkers have been silenced for five years,” Assemblyman Jim Patterson (R-Fresno) said in a statement. “The governor of this state, the members of the Agriculture Labor Relations Board — chosen by him — and the United Farm Workers union have done everything in their power to stop these votes from being counted.
“For the farmworkers who have continued the fight to have their votes counted after many defeats and disappointments — justice has finally been served. Their voices have been heard loud and clear.”
[9/18/18, 4:45 p.m.: This item has been updated to include reaction from Gerawan and UFW.]

Janz Gets Boost From Newsom, But Crickets From DCCC 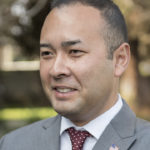 Andrew Janz
Gubernatorial candidate Gavin Newsom recently sent a fundraising email — not for himself, but for congressional candidate Andrew Janz. The Fresno Democrat is challenging incumbent Rep. Devin Nunes (R-Tulare) in the 22nd district.
“Andrew actually wants to help Valley residents — but Nunes has Big Oil and Koch brothers money pouring in to protect his seat, so this is no easy fight,” Newsom wrote to his supporters.
Meanwhile, Politico reports that Janz is having a hard time with the Democratic Congressional Campaign Committee.
“Janz and his campaign manager, Heather Greven, said the DCCC misled Janz about the support he could expect from the DCCC in the Central Valley-based district. And Janz said he has asked DCCC staff and members of Congress for a five-minute call with DCCC Chairman Ben Ray Luján, but ‘he won’t return my calls,’ ” writes David Siders.
“We don’t need their help. … We are fine without them at this point. … I just question sometimes their motives, and I question their competency,” Janz told Politico.

The items on the Fresno City Council closed session agenda are much more interesting than the open session of Thursday’s (Sept. 20) meeting.
The council will discuss eight items in private. Among them:
— Negotiate the sale of two downtown pieces of property: a parking lot at 801 H Street to Fresno Sports and Events, LLC, the owners of the Fresno Grizzlies; and sale of the spiral garage to a company called Radnor Capital Corp., based in San Diego County.
— Initiate litigation against four cannabis-related businesses. They are Sticky Fingers Delivery, People’s Cure Inc., One OZ 88, and Green Leaf. There is no mention of the reasons for the action.
— Discuss the lawsuit filed the family of Rosa Pena, who allegedly died after a rough FAX bus trip on Dec. 30, 2016. In a court filing, the complaint alleges the wheelchair-bound Pena was not properly strapped into the bus. When the vehicle braked hard, it threw her from her chair. She died two weeks later.
— Deal with paying attorney fees to the California Grocers Association, stemming from a lawsuit over a recycling ordinance.  CGA won its lawsuit earlier this year, overturning a city law restricting where recycling could take place.
— Receive an update on an environmentalist group’s lawsuit over the approval of the Caglia business park project.
— Discuss two separate employee discrimination cases. One involves Robert Mesel, a transportation department employing who is suing the city. He alleges that the city did not promote him because of a disability. The second case, in federal court, involves firefighter David Phillips-Kerley, who claims 21 counts of discrimination over his race.

The council also is scheduled to discuss whether it should grant historic status to a PG&E owned building at 7430 N. Weber Ave. City staff says that the 1931-era building is worthy of protection because of its history and Art Deco style.
The item initially appeared on the agenda in June but was pushed back for various reasons, including the recent wildfires that affected the utility company.