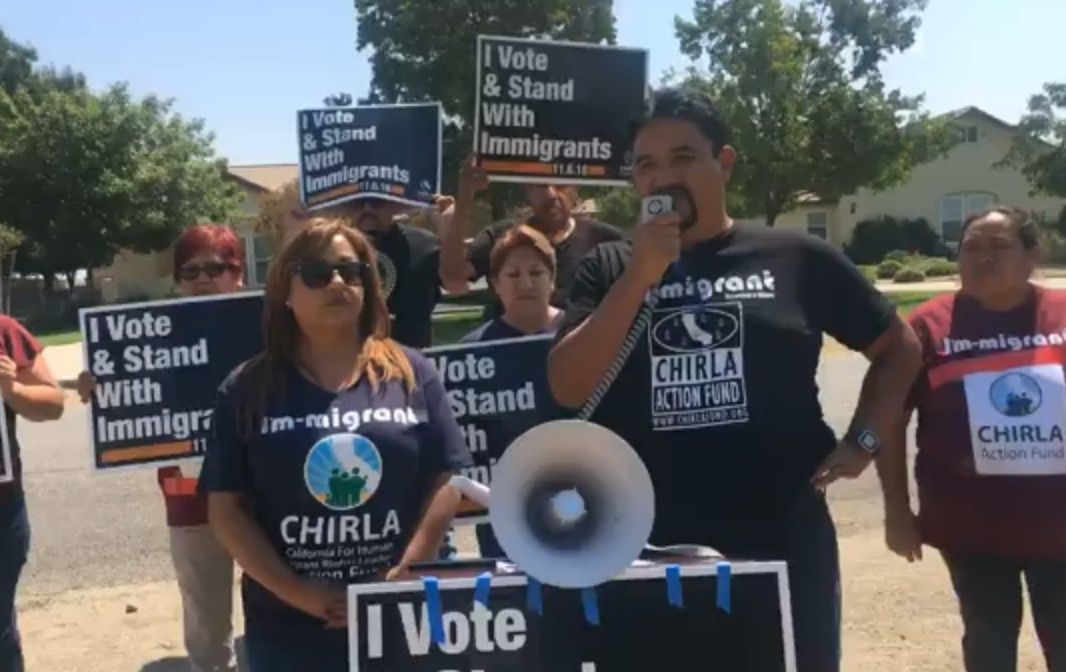 Congressman David Valadao is calling an immigration protest at his house a case of uncivil discourse.
A group of protesters congregated outside of Valadao’s Hanford home this morning (Aug. 15), with his wife and three children inside. Valadao was not there.
About 10 CHIRLA Action Fund protesters gathered on a field across the street from the house, delivering speeches on a bullhorn and chants, in English and Spanish.
(Click the video above to view the protest.)
“We want to remind Valadao he has been with us sometimes, promising he is going to support the immigrants. But that is not happening,” said CHIRLA member Antonio Bernabe. “When the time to vote is coming in Congress, he is voting against us. He is voting for the anti-immigrant proposals. He is forgetting about the immigrant community.”
The group chanted “Valadao escucha. Estamos en la lucha (Valadao listen to us. We are in the fight),” as well as “Keep families together” in English.

“Our office finds this to be incredibly inappropriate,” said the office of the Republican congressman in a news release.

The CHIRLA group also participated with about 40 protesters later at Valadao’s Hanford office. Immigrant rights groups, including UFW Foundation, SIREN, ACLU of Northern California and the Dolores Huerta Foundation, held a “day of action” around the nation.
“Valadao’s record of voting in favor of anti-immigrant bills, such as the Border Security & Immigration Reform Act of 2018 that calls for billions of dollars in border funding, indefinite family detention and the turning away of asylum seekers, contradicts his public statements that he stands in solidarity with immigrants,” UFW spokeswoman Leydy Rangel said.
The Border Security & Immigration Reform Act failed in a House vote, 301-121, June 27. Valadao voted in favor of the bill in a losing effort.

Fresno area businessman TJ Cox, a Democrat, is challenging Valadao in California’s 21st District. Valadao, a three-term incumbent, captured 62.8 percent of the vote in the two-person primary.
Cox distanced himself from CHIRLA’s actions.
“Our campaign had nothing to do with the protest that occurred outside Valadao’s home. We do not support nor sponsor this type of demonstration. Instead, if voters are unhappy and frustrated with Valadao’s lack of leadership in Washington, we encourage voters to make their voices heard by voting on November 6″, Cox’s campaign manager Francois Genard told GV Wire via email.
The Cook Political Report rates the race as “likely Republican” even though Democrats hold a registration edge.