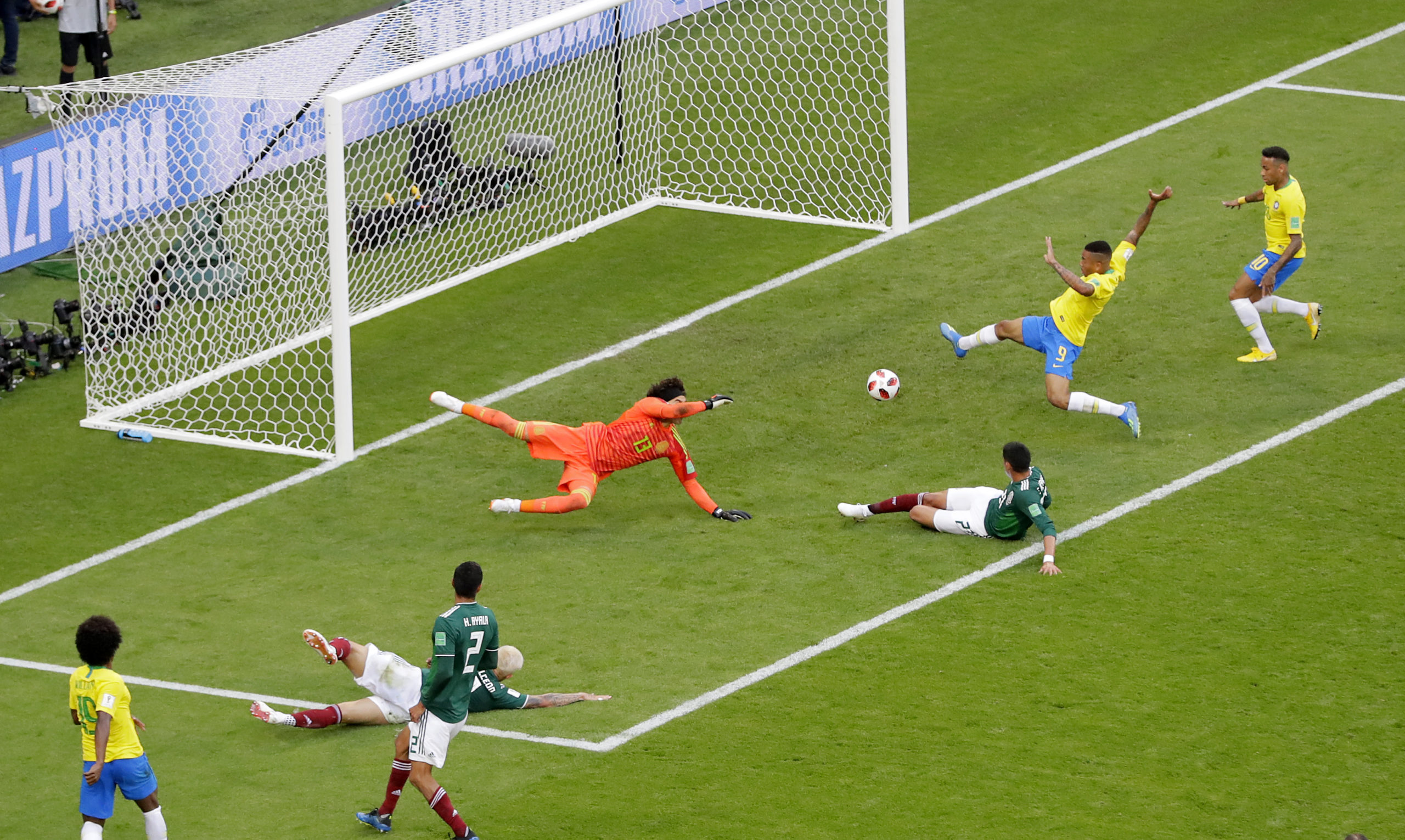 SAMARA, Russia — Neymar flaunted his flair and his theatrics with a goal and an assist Monday at the World Cup.
The world’s most expensive player led Brazil over Mexico 2-0 Monday and into the quarterfinals of the tournament for the seventh straight time.
Neymar broke through Mexico’s stern resistance by setting up the opener when his back-heel released Willian. Neymar then ran into the penalty area and slid to tap Willian’s cross into the net.
While his scoring is so often the focus, Neymar also creates goals for his teammates. A toe-poked attempt to beat Mexico goalkeeper Guillermo Ochoa in the 88th minute was diverted into the path of Robert Firmino, who scored the second. Neymar has 11 goals and nine assists in his last 19 games for Brazil.
But before setting up the second goal it looked like Neymar’s game — or even his World Cup — could be over with 20 minutes to go. It turned out to be pure histrionics. Writhing in agony after his right ankle was stepped on by Miguel Layun, Neymar managed to get back on his feet. But not before trying to step on Layun. Both escaped punishment.

Brazil Has Reached Every Quarterfinals Since 1994

The five-time World Cup champions will next face either Japan or Belgium in the quarterfinals, the stage they have reached at every World Cup since 1994.
Mexico has now lost at this stage at every tournament over the same period of time, extending its wait for the “quinto partido” — or fifth game — for at least another four years. The last time Mexico reached the quarterfinals was when the country hosted the tournament in 1986.
This year’s World Cup had started so promisingly for Mexico. The team opened with a win over Germany, setting the defending champions on the path to an early exit. They caused problems for Brazil, too, initially.

Neymar Is Too Much for Mexico

But they couldn’t find a way to stop Neymar, who has scored two goals in four matches in Russia.
“The key was to play together without the ball because with the ball we know the quality of the team,” Willian said. “We know we have players that can decide the game.”
Neymar’s dispute with Layun unfolded as the Mexico substitute tried to recover the ball. In a delayed reaction, Neymar made the most of Layun stepping on his ankle, rolling around with his hand covering his eyes.
The rapid recovery seemed miraculous for a player who missed the last three months of the season with a broken right foot.

“We wasted a lot of time because of one single player,” Mexico coach Juan Carlos Osorio said, without naming Neymar. “I think this is a real shame for football, especially for kids who are watching because this has to be a sport of virility, of determination, a man’s sport, like other games, and not a charade.”
During the win over Costa Rica in the group stage, Neymar tried to win a penalty by flopping to the ground in the area. A video review reversed the decision to award a penalty kick and Neymar’s frustrations a few minutes later led to a yellow card.
Brazil coach Tite also played a big role in the victory over Mexico, deciding to replace Philippe Coutinho with Firmino. Fresh among tiring legs, Firmino was able to evade the defense to get in the right place to score the second goal.
Neymar, though, still led the celebrations, charging toward the corner flag. Tite came to join him.
With Germany, Argentina and Spain among the contenders already eliminated, Brazil’s hopes of a sixth World Cup title have received an extra lift.