Newsom Spells Out Cuts as Budget Goes From Surplus to $22.5B Deficit 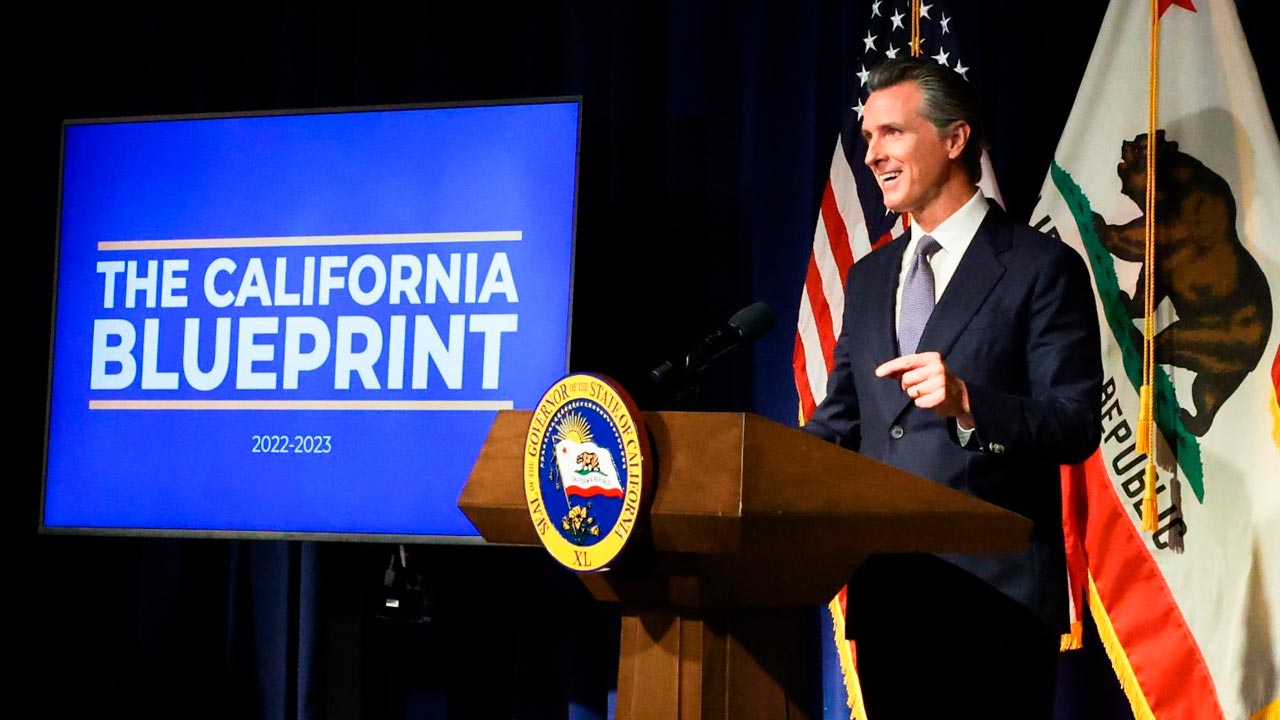 The deficit, while unsurprising, could signal the end of a decade’s worth of economic growth in the nation’s most populous state.

Newsom, a Democrat, is proposing to close the hole by delaying spending in some areas and changing how others are funded. His budget appears to avoid significant cuts to most major programs, although it does lower proposed spending on climate change initiatives by about $6 billion. The state hopes to restore that spending in 2024 or offset it with federal money.

Among his climate maneuvers: He’ll shift $4.3 billon in spending on zero-emission vehicles from the state’s taxpayer-funded general fund to a special fund paid into by polluters. He’s also delaying by a year $3.1 billion in climate and transportation funding.

The state still has about $35.6 billion in reserves.

Budget Revise in May, Final Budget in June

Newsom stressed that California would continue robust spending in public and higher education, climate change, health care, and responding to drought and wildfire.

“We’re keeping our promises,” he said.

Newsom’s presentation offers the first glimpse of his spending and policy priorities as he launches his second term, but it’s not the final say on how the state will dole out money. He’ll reassess the state’s finances in May after tax revenue has come in, and he’ll sign a final budget in June.

The California Republican Party quickly blasted the proposal, saying Newsom has for years failed to adequately tackle issues like homelessness and wildfires despite record spending.

“Now with a massive budget shortfall projected, it’s time for Gavin Newsom to finally get serious about smarter spending to resolve the many issues that are plaguing our state and driving long-time residents away,” party Chairwoman Jessica Millan Patterson said in a statement.

Newsom’s proposed cuts to climate spending, including programs designed to boost zero-emission vehicles, drew criticism from some of his traditional environmental allies. The budget reduces hundreds of millions in spending on programs to expand zero-emission vehicle infrastructure in low-income neighborhoods and to transition delivery trucks, airplanes, rail lines, and other transportation sources away from greenhouse gases.

“Investing in climate solutions is the only way to ensure a better California for all who live here,” said David Weiskopf, senior policy adviser for the climate group NextGen California.

His proposed budget isn’t all cuts — Newsom wants to give an additional $1 billion to local governments to combat homelessness, although he wants more accountability from local leaders. In the fall, he threatened to withhold funding for such programs. He’s also proposed spending more on cash assistance programs for low-income and disabled Californians.

Other ways he’s closing the spending hole include pulling back on $3 billion designed to help the state deal with inflation.

Newsom has been warning of a potential budget shortfall for more than a year, and the Legislative Analyst’s Office said in November the shortfall could be around $25 billion.

In September, Newsom publicly scolded lawmakers for sending him dozens of bills that, when added together, would have allowed billions in new spending. Newsom vetoed those bills, saying he has “made it crystal clear that we are seeing economic headwinds.”

Dealing with a deficit will be a change of pace for the state, where spending has more than doubled in the 10 years since the last recession. Officials have launched a dizzying amount of new programs and services — including committing to pay for all 4-year-olds to go to kindergarten and agreeing to cover the health expenses of all low-income immigrants who are living in the country without legal permission.

The money has come mostly from a soaring stock market that launched a parade of California-based tech companies. Those companies — including the likes of Uber, Airbnb, Lyft, and Pinterest — made lots of people very rich, creating a new class of millionaires and billionaires in a state with a progressive tax code where nearly half of all income taxes come from the top 1% of earners.

Since then, lots of economic factors — led by runaway inflation, supply chain disruptions, and Russia’s invasion of Ukraine — have had a chilling effect on the economy. The S&P 500, a key indicator of the health of U.S. stock markets, has fallen more than 18% since its peak at the end of 2021.

California Relies on Taxes From the Rich

With rich people not making as much money, they are paying less in California state taxes. So far this year, California’s tax revenues have been $4.6 billion below expectations — not including some one-time corporate tax payments that state officials say they can’t count on.

Money from capital gains taxes is projected to be about 5.5% of the state’s revenue, down from 9.75% last year, Newsom said.

Still, California appears to be well-positioned to weather an economic downturn. Of the $131 billion in general fund surpluses the state has had in the past four years, most of it — about $80 billion — has paid for things that do not require ongoing funding, like construction projects. Just $10 billion of surplus spending has paid for ongoing commitments, according to the Legislative Analyst’s Office.

Constitutional limits prevent lawmakers from emptying reserves to cover a deficit. And unlike the federal government, California’s budget must be balanced. Newsom and lawmakers will have to tighten state spending to cover all of the shortfall — something that Senate Budget Committee chair Nancy Skinner said is doable.

“We funded things at such record levels, and a lot of the programs that we funded haven’t even gotten going yet, so we still have room to make some adjustments if needed,” she said. “I’m very optimistic because we’re in good shape.”

Gas Stoves Cause One in Eight Child Asthma Cases in US: Study