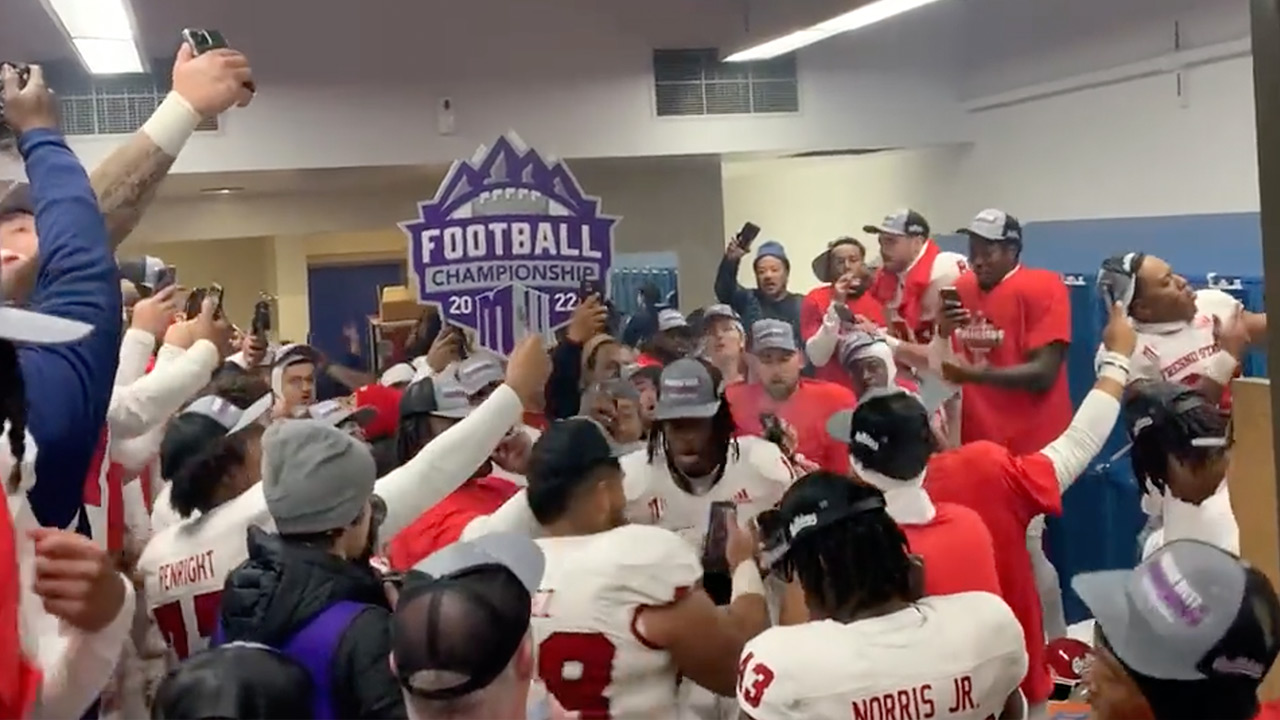 When Fresno State’s Jake Haener was presented with the season’s biggest challenge — taking down perennial conference power Boise State — coach Jeff Tedford knew his quarterback would be up to the task.

Haener, who didn’t play against Boise State when the teams met earlier in the season due to an ankle injury, threw for 184 yards and a touchdown to lead Fresno State to a 28-16 football victory over the Broncos on their home blue turf Saturday in the Mountain West Conference championship game.

Fresno State (9-4) overcame a 1-4 start to the season and a rash of injuries to win its final eight games, claiming the program’s third Mountain West crown.

Next Up: The Jimmy Kimmel LA Bowl

“We’ve come a long way since the first part of the year when a lot of people didn’t believe in us,” Tedford said. “But the staff did and the kids did. … It’s nice to see them happy.”

“We have to tip our hat to (Fresno State),” Boise State coach Andy Avalos said. “We obviously didn’t accomplish what we set out to do today, but we accomplished a lot of things this year. … And we do get one more opportunity in a bowl game.”

Haener Delivers in the Big Moments

But it was Haener who delivered in the moments when Fresno State needed him most, which didn’t come as a surprise to Tedford.

The pair go all the way back to when Haener was 9 years old and looking for some help as a budding quarterback. A mutual friend connected him to Tedford and a long-lasting relationship was born.

“We worked together a little bit and I gave Jake a couple of goals, and he was so dedicated to those goals,” Tedford said. “I told him he had heavy feet and he needed to jump rope five hundred times without missing. Eight months later, I got a call from him, and he said, ‘I did it, I did it.’”

Tedford, who recruited Haener out of high school, had to recruit him again when he entered the transfer portal after the coaching change at the end of last season and considered leaving Fresno State. But Tedford won him back.

“I wanted to be able to come back and play with this great group,” Haener said of his decision to stick it out at Fresno State for his senior season. “Once I got this guy (Tedford) on the other side of the phone, I knew I wanted to be here and play with this group. It’s been awesome and the adversity we’ve faced together has been one of the biggest challenges in my life. And it’s been awesome.”

Haener took full advantage of every miscue by the Broncos. The game’s offensive MVP was five of eight on third downs and led two key scoring drives in the fourth quarter.

“This is the golden boy of the conference and … to come up here against one of our biggest rivals in the conference, it definitely means more,” Haener said.

Bulldogs Strike Late in First Half, Roll From There

Boise State controlled the game early but struggled to find the end zone, clinging to a 3-0 lead late in the first half. But that all changed when Fresno State scored two touchdowns in a span of 2:36 right before halftime.

Nikko Remigio’s electric 70-yard punt return snaking back and forth across the field sparked Fresno State. On the ensuing possession, defensive player of the game Cameron Lockridge intercepted the first of two passes, returning it 25 yards to the Broncos’ 17-yard line. Three plays later, Jordan Mims scored on a 2-yard run to put the Bulldogs up 14-3. They never relinquished the lead.

After Boise State edged within 14-9 in the third quarter, Fresno State took advantage of a roughing the punter penalty on fourth-and-15 to breathe new life into the drive. Haener finished with a 22-yard scoring strike to Zane Pope. He tacked on another scoring drive on the next possession to put the game out of reach.

Jordan Mims rushed for 83 yards and a pair of scores for Fresno State.

Boise State’s Taylen Green was 17-of-38 passing for 175 yards with a touchdown and two interceptions.

Boise State: While Broncos quarterback Green made his initial splash on the team with his legs, it’s his arm that turned the season around. However, Green was often off-target against Fresno State.

Fresno State: The Bulldogs’ 10-3 campaign a year ago served as a springboard for sustained success in 2022. However, Tedford, who has now won two Mountain West titles, will have his work cut out for him in 2023 as his talented team is losing eight seniors on offense and five more on defense. If he chooses to utilize the transfer portal, he could shore up the team’s short-term needs and keep Fresno State in contention for another conference title.

KEEP AN EYE ON

Fresno State: While Haener is the Bulldogs’ best-known player, Mims keeps defenses honest. He has run for 1,161 yards and 16 touchdowns during his senior campaign.

Washington State: The Cougars had won three straight before losing to in-state rival Washington to close the regular season.

Fresno State: Has reached consecutive bowls for the second time since 2017-18 and 31st bowl overall.