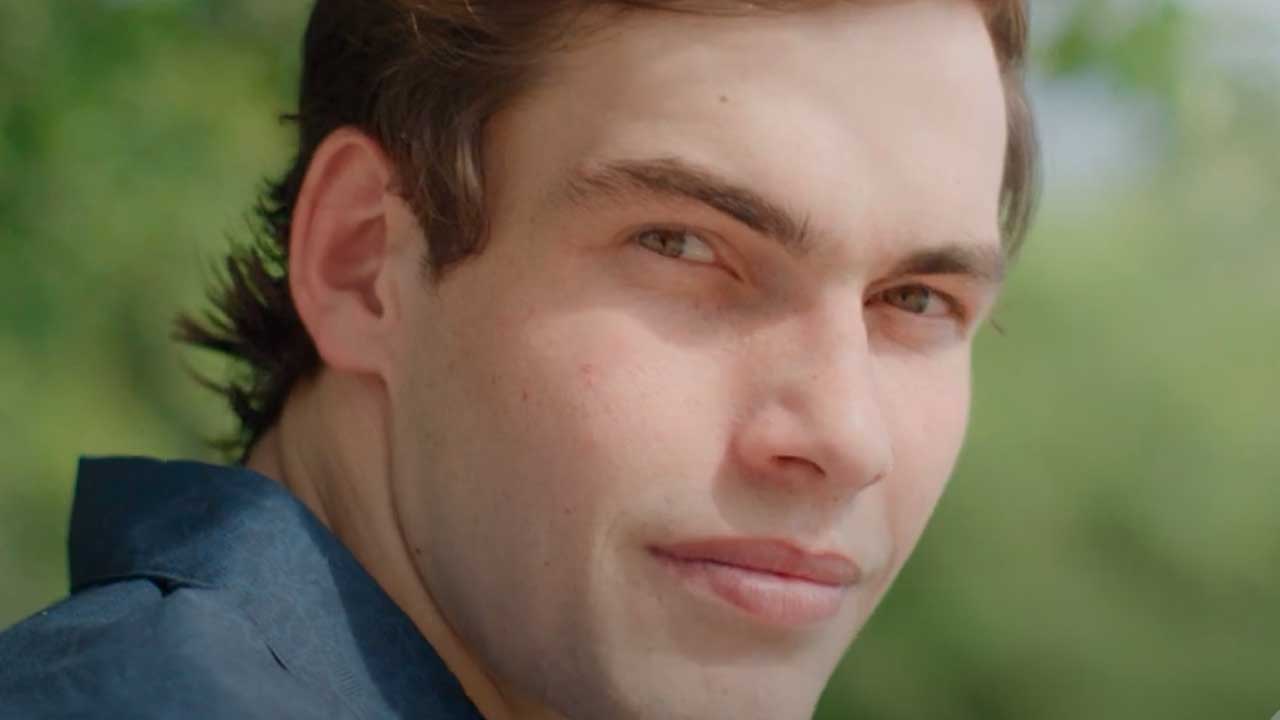 Following a trip to document refugees fleeing war in Ukraine, Fresno native John Kasaian next focused his lens on his ancestral home of Armenia. (GV Wire/Albert Baker)
Share with friends

At just 21 years old, Fresno-born photographer John Kasaian discovered he has a passion for documenting the effects of global conflict up close.

The Bullard High School graduate hopped on a plane in early March, shortly after Russia invaded Ukraine, to capture wrenching scenes of refugees fleeing tanks and missile attacks. He said he was motivated to help Americans become more aware of the turmoil that often exists outside the “perfect bubble of the world” most in the United States enjoy each day.

Just a few months after that eye-opening experience, Kasaian headed back overseas. This time his focus was on his ancestral home of Armenia. There, the long-simmering dispute with neighboring Azerbaijan over the disputed territory of Nagorno-Karabakh continues to take lives, despite a cease-fire from a six-week war that erupted in 2020.

“I wasn’t very in touch with my Armenian heritage, I guess,” Kasaian said of his familiarity with the country before his trip. Once he arrived, though, the experience was almost overwhelming.

“The culture shock of actually being in Armenia almost distracted me from the project that I was there to document,” he said.

In a GV Wire exclusive, Kasaian shares his powerful images and observations about his first-ever visit to Armenia in late May.

Part One: A Local Name Among Armenia’s Revered War Dead

Since 1988 the Yerablur Military Memorial Cemetery has become the burial place for Armenian soldiers that have lost their lives in the Nagorno-Karabakh conflict.

The cemetery is perched up on a hill on the outskirts of Yerevan where a nice view of the city greets the eye. I do not find it too common to ever see a cemetery being built. A more disheartening feeling is knowing that this cemetery will only ever stop construction once this conflict comes to an end.

Leaving an eerie feeling in your stomach as you walk around this hillside, you see the stone tiles and wet cement litter the lower half of the cemetery in preparation for new graves.

On the evening of May 23, I came to visit the cemetery. It was at the end of a long stormy day. Many vases were left windblown over the graves, with flowers that had fallen from vases creating a sort of neglected feel. There is a distinct smell of days-old roses, which anyone who has been to a cemetery knows. 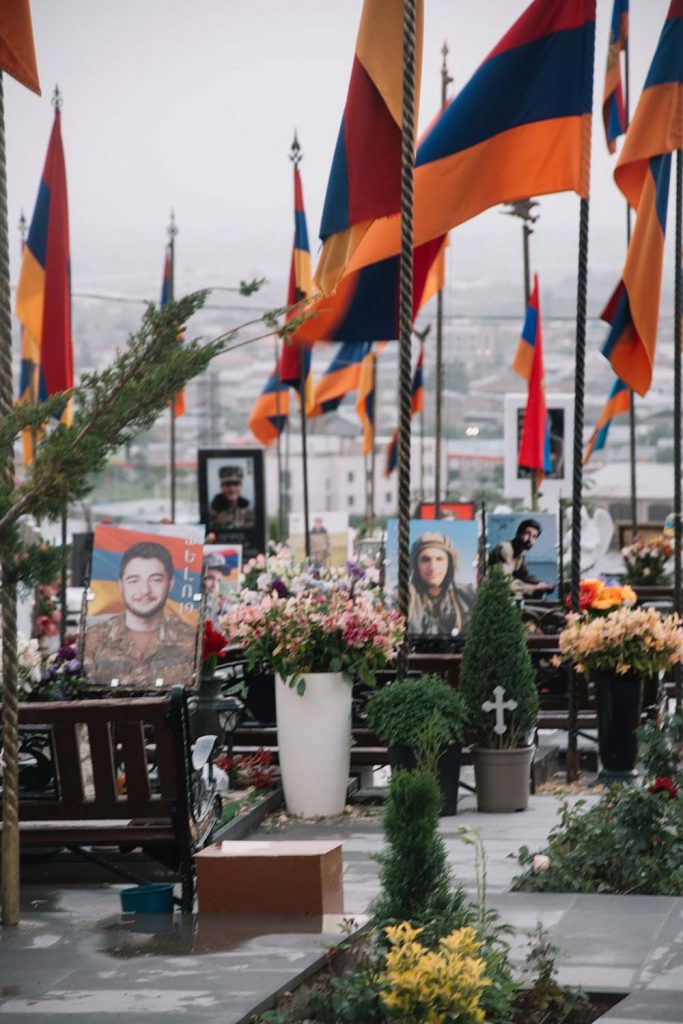 Pictures of fallen soldiers are displayed next to their graves at Yerablur Cemetery in Yerevan, Armenia. (Photo by John Kasaian) 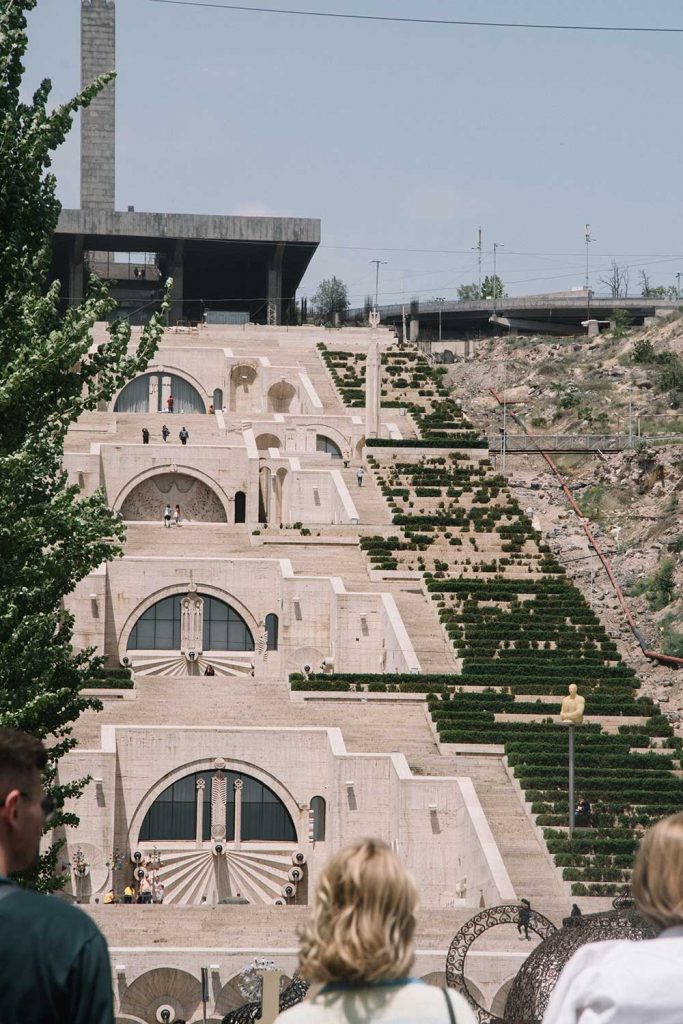 Known as "cascade" a beautifully designed stairway that on each level holds a small museum for art that shows the history of the country. This stairway connects Yerevan for the walking pedestrians due to the geographic nature of the city being that it is separated by a bluff. (Photo by John Kasaian) 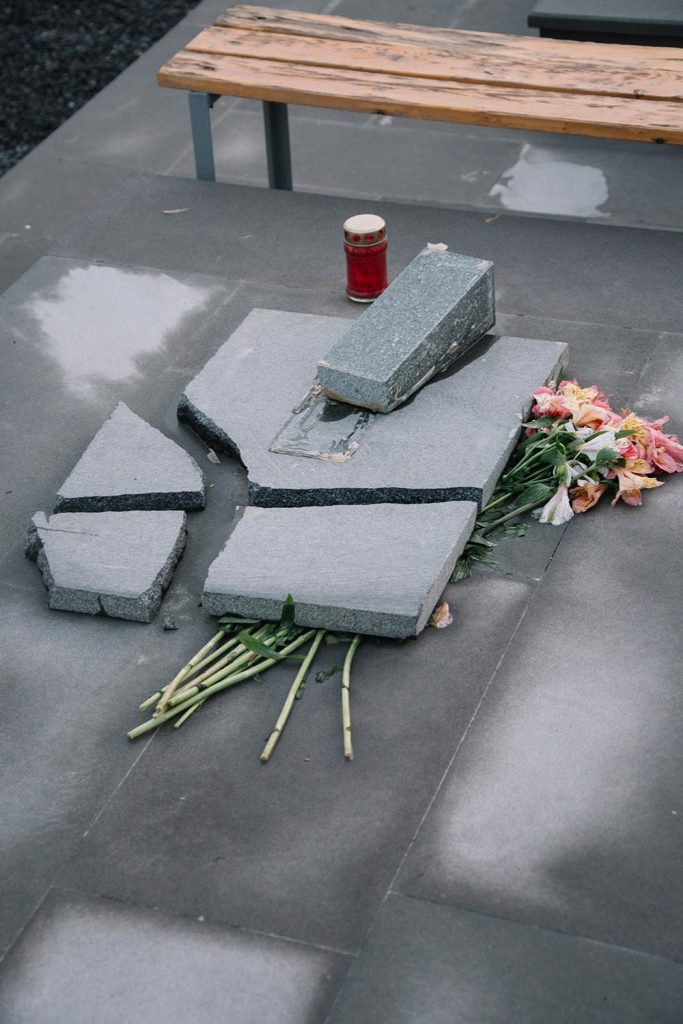 A toppled headstone lays fractured atop a bouquet of flowers. (Photo by John Kasaian) 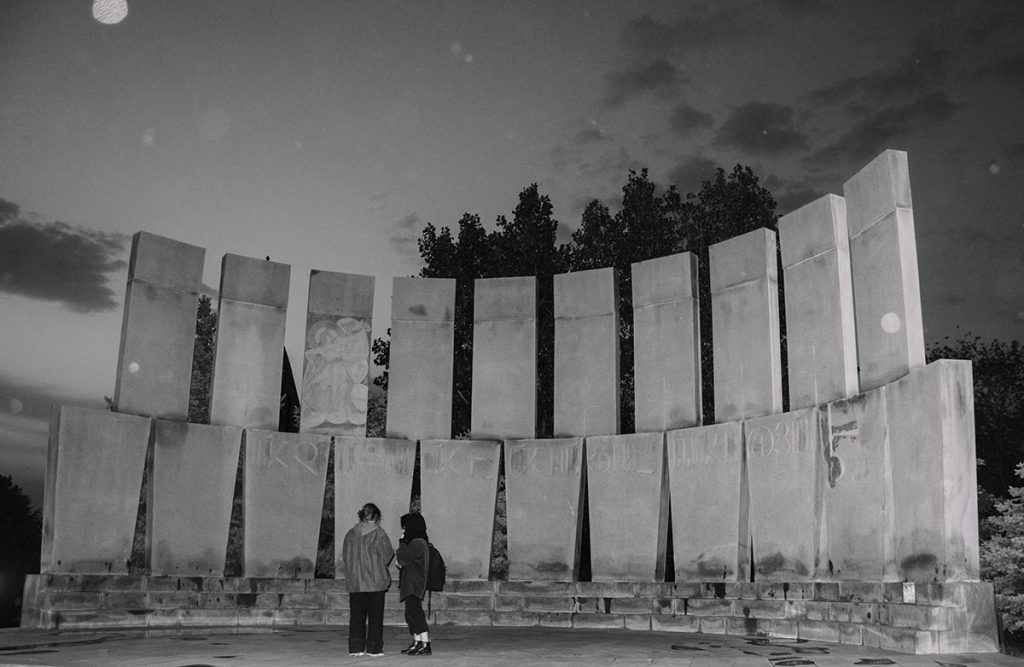 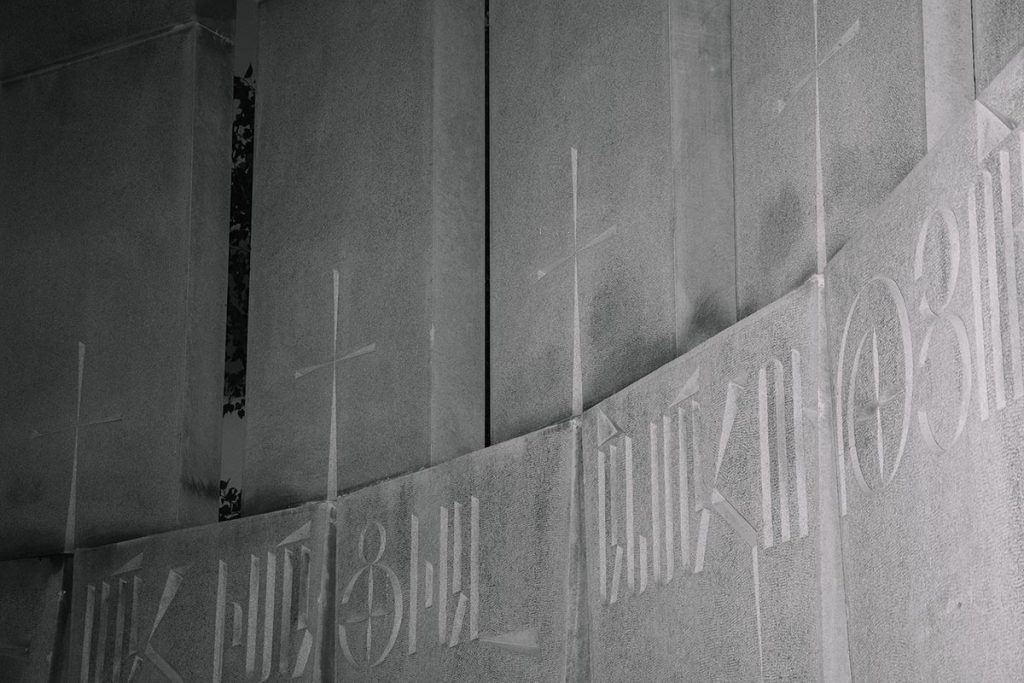 A close-up view of the cemetery's monument. The inscription reads "death unknown is death, death known is immortality." (Photo by John Kasaian) 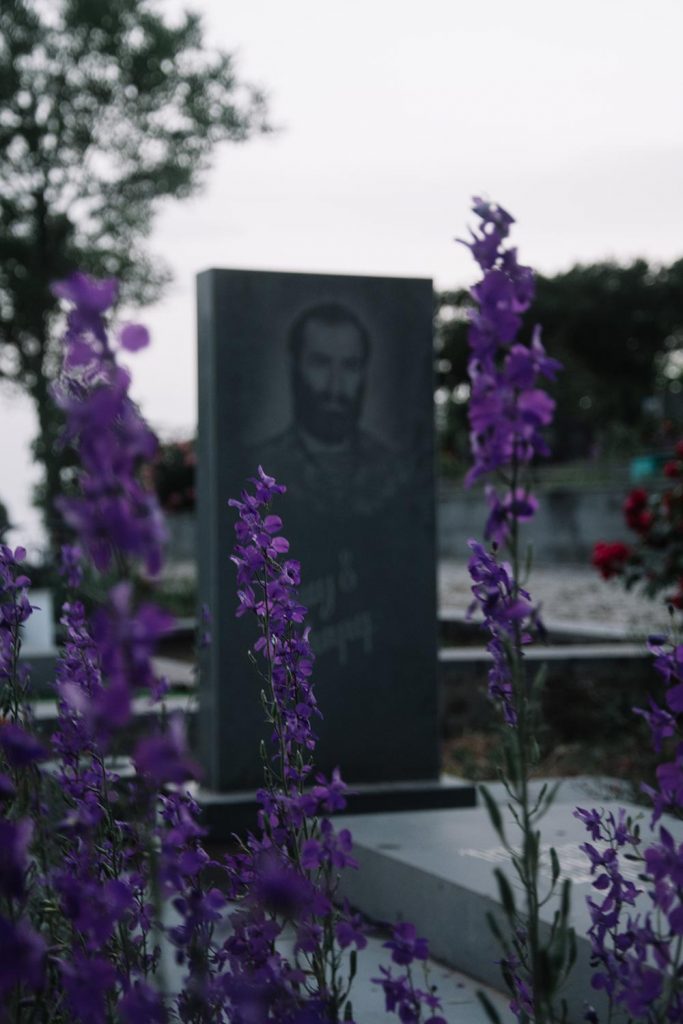 Flowers are scattered among headstones in the cemetery allowing focus to be drawn to all the intricacies. (Photo by John Kasaian) 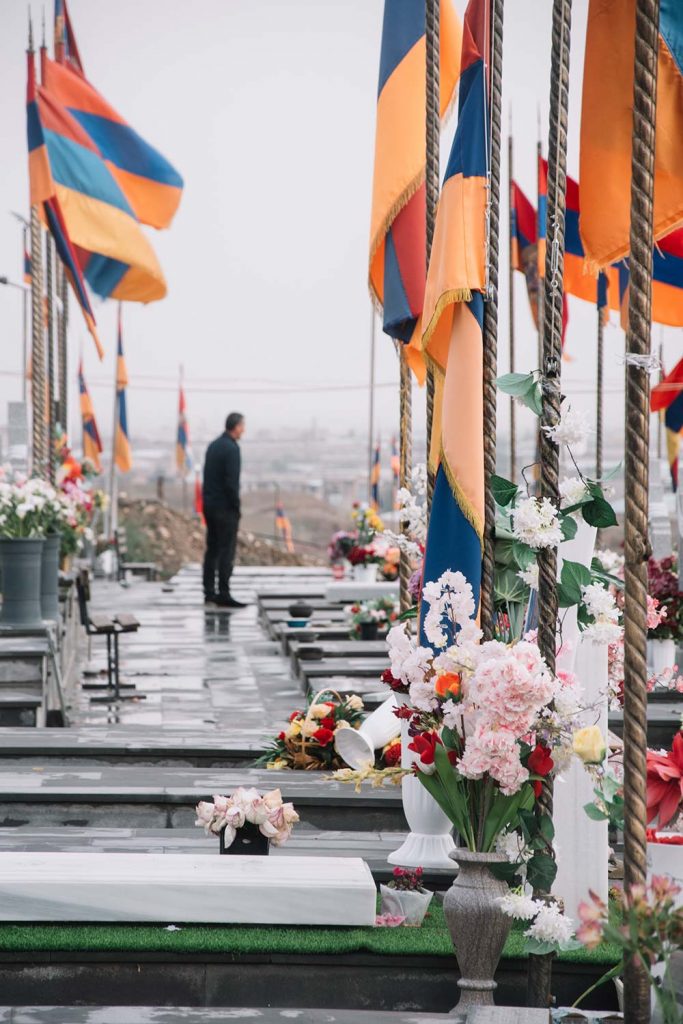 A man stands alone at the top section of the cemetery overlooking the nearby town. (Photo by John Kasaian) 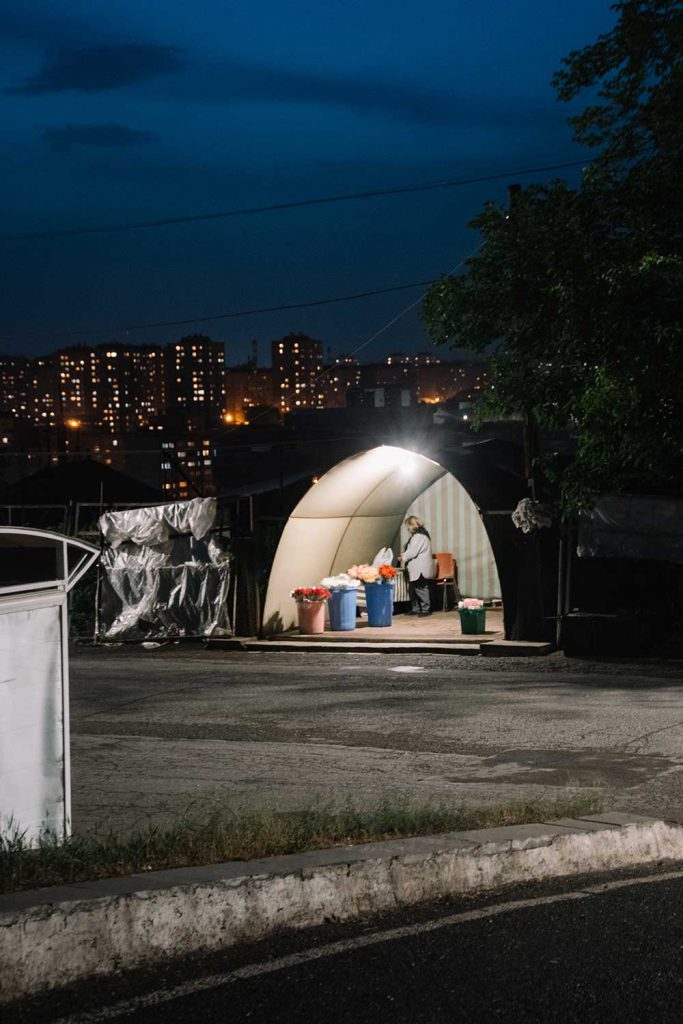 A lone flower shop that sits at the entrance of the cemetery, open till the darkest hours of the night. (Photo by John Kasaian)

The combination of the muddied water, wilting flowers, and the sight of toppled ceramic vases set the scene for what could only be described as emotionally paralyzing. Surrendering any visitor to the realities of this conflict and giving an understanding of the sheer size of the casualties the conflict has produced.

With the current state of the cemetery, it was a relief to see people come out to clean up the graves; reset the vases and flowers, sweep the leaves off the newly poured concrete, and return them to their prior state. At the end of our walk around the cemetery, the trail pushed us towards a large monument. An inscription reads “Մահ չիմացիալ մահ է, մահ իմացիալ անմահություն.” Translated, it means “Death unknown is death, death known is immortality”.

A few notable people are buried at this cemetery. They include Vardan Stepanyan, better known as the Dushman Vardan, who was a commander in the first Nagorno Karabakh war from 1988 to 1994 and was widely known as a hero in Armenia. There’s also Sose Mayrig. Born as Sose Vartanian, she was surnamed Mayrig for her maternal care over the youth of Armenia and her bravery.

And, then I come across the grave of Monte Melkonian. Originally from Visalia in the Central San Joaquin Valley, he was an Armenian-American commander who served bravely in the first Nagorno Karabakh war and was buried with full honors. A crowd estimated at 100,000 people celebrated his death as his casket was walked through the city center.

Walking through this cemetery reminded me of the impact this war has had on its country, the mourning faces of mothers, and confused siblings seeing the grave of their 17-year-old brother. Armenia is in a war they never wanted to fight.