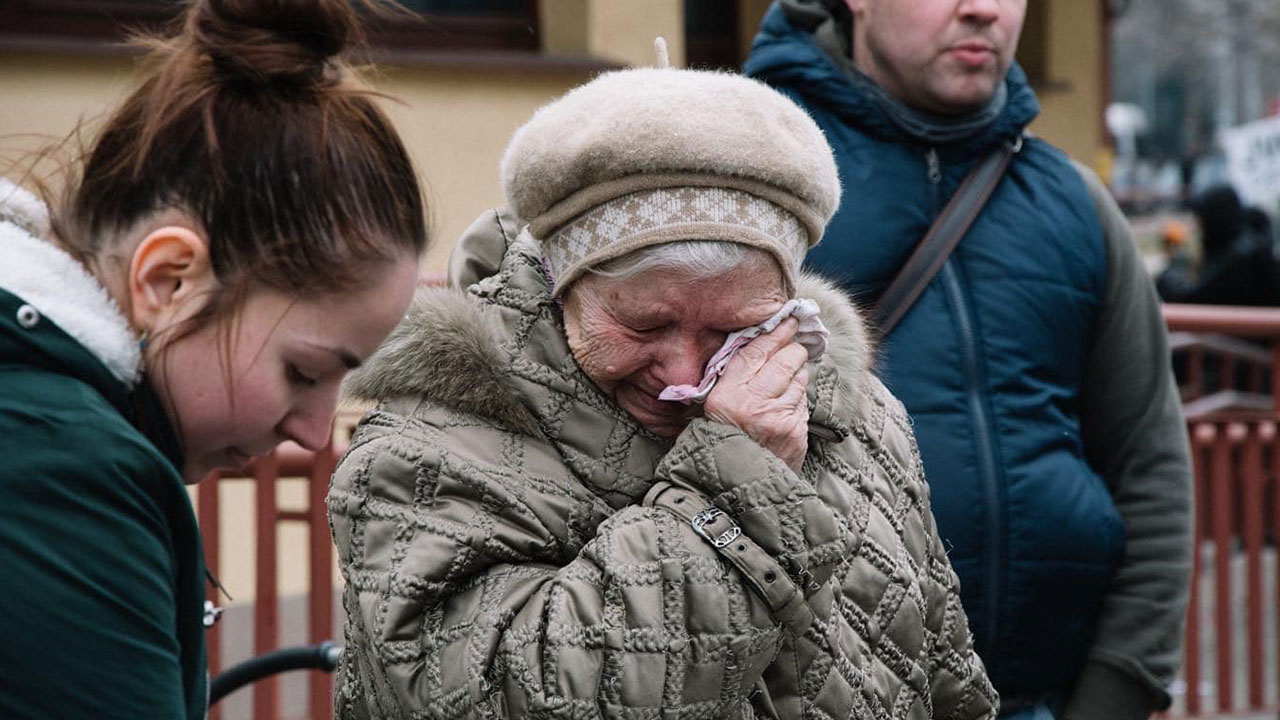 Refugee families say goodbye to sons, fathers, and husbands as they make their way back to defend Ukraine from Russian forces. (John Kasaian)
Share with friends

A few months ago, 21-year-old John Kasaian was working at a coffee shop in Fresno and freelancing as a photographer. Then he felt a calling to capture the images of the Russia-Ukraine war.

After a few conversations with his mom and support from his parents, Kasaian made the 15-hour flight to Poland and settled in a hostel in Przemysł 20 miles from the Ukrainian border.

Forlorn faces and teary eyes can be seen filling buses and train stations at the Polish border after saying goodbye to sons, husbands, and fathers.

And, while millions of refugees have escaped Ukraine since the Russians invaded on Feb. 24, Kasaian also captured an image of a couple at the Polish border heading into a country that can no longer provide safety. Their quest: to find the woman’s mother.

Now back on U.S. soil, the Bullard High School grad says these and many more images are seared into his brain.

A Calling to Photograph the Impacts of Russian-Ukraine War

“Recently I had a chat with my photographer friend Daylon about the events unfolding in Ukraine,” said Kasaian. “We talked about how being a photographer brings on an underlying pressure to capture world events such as these.”

For Kasaian, navigating the border and capturing the images of the refugees required him to develop new skills. His previous photography experience was shooting natural landscapes, outdoor adventures, and a couple of protests here in the Valley.

Kasaian, still in disbelief by what he experienced and witnessed, said he made friends with several refugees and fellow photographers along the way.

“In America, we live in a pretty perfect bubble of the world, and I think I understood that growing up, but I don’t think I ever could even begin to imagine what our perfect little world looks like compared to over there,” said Kasaian.

“Partially, I do really want to go back and go help, the other half of me is so grateful that I went over there and experienced it … and I am really trying to get more people aware of what exactly is going on over there and using my photos to do so.”

In a Facebook post on Tuesday, he said that his experience there helped him make up his mind about future goals.

“Moving forward I’d like to continue work in photojournalism, learn from this past trip, invest and apply what I learned into future trips. My hope is that this is just the start of my career.”

Thousand of Ukrainian Women and Children Flee to Poland

When Kasaian arrived in Poland, he noticed the thousands of women and children filling train stations and bus loading zones out of Ukraine with rarely a man among them.

Kasaian said it felt surreal seeing only an occasional man in the exodus.

“There was a lot of people fleeing the country and people being mothers and daughters,” said Kasaian. “A lot of the women were fleeing, a lot of the men were staying.” 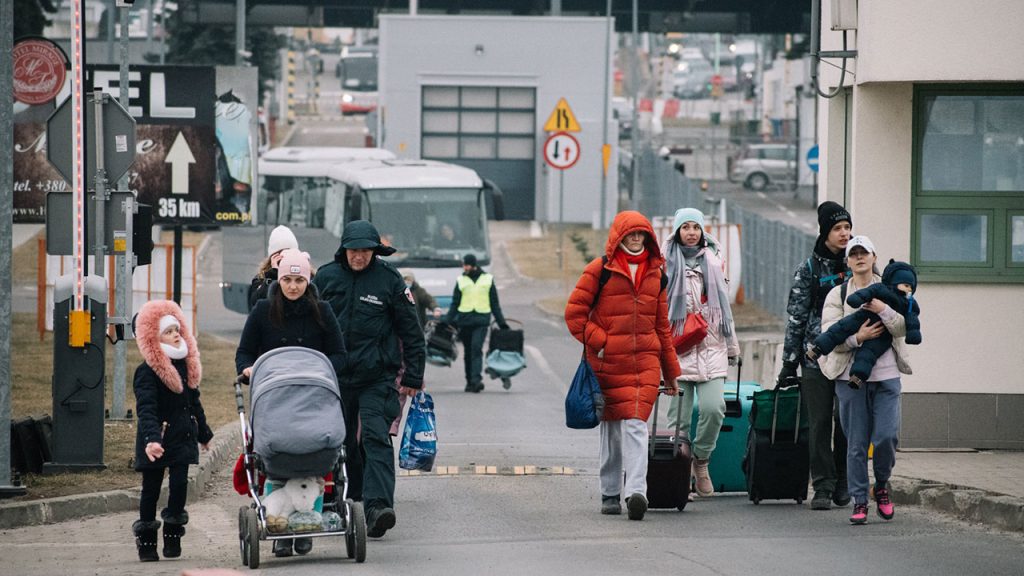 “Coming west to east, going to the border of Ukraine … I got out and I was in the train station and it was like a flood of people were sitting there. … You could tell they had been sleeping there for a few days,” said Kasaian. “So many kids just running around and, you know, trying to, retain some of their childhood like while all of this is going on.”

Of the few men that Kasaian encountered, most were young boys or teenagers only a few years younger than him.

“I felt like the moments that I talked to them was when they finally had left the country, and I feel like there was … a relief of the fact that they finally escaped,” said Kasaian.

To help alleviate and reassure refugees that they are safe, a couple of Polish dads greeted women and children at the border dressed in cartoon costumes.

“I think these Polish dads kind of felt bad and wanted to bring some light to the situation,” said Kasaian. “At the end of the day, there are these kids there that are four or five, six, seven years old that just left everything. So they just kind of went around in their costumes and had some fun with the kids, handed out a few toys and stuff.” 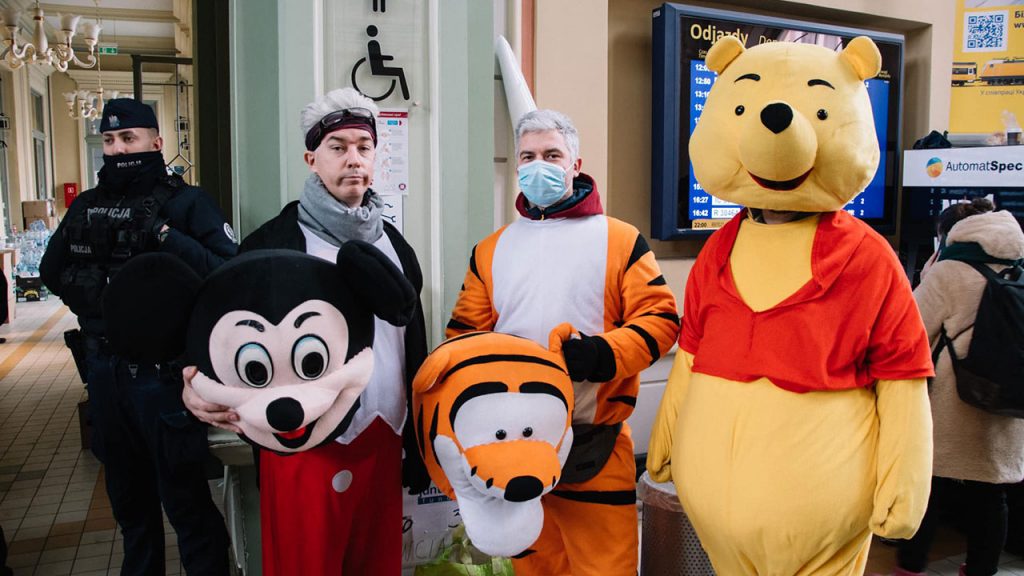 Polish dads dress in costumes to greet and help cheer up Ukrainian children at the Poland-Ukraine border. (John Kasaian)

While on a train heading east, Kasaian met a husband and wife, Adam and Alex, traveling from England searching desperately for the woman’s mother.

“The wife was originally from Ukraine, the husband is from England, and they were going back to find her mom,” said Kasaian. “It was extremely hard to see just the emotional toll on this poor lady who had just the worry of her mom, like where is she? … I thought what they were doing was incredible.”

Kasaian said that while he couldn’t ever relate to what the woman was going through, seeing the hurt and anxiety wrecked him emotionally. Fear crept in. What if he had to rescue his own mother?

After traveling with them on the train for five hours, Kasaian got to know the couple pretty well. They conversed about American sports, skydiving, and climbing Yosemite, but he felt uncomfortable asking to take their photo.

“We talked a lot about the morality of going and taking photos in war zones like these and, you know, getting people when they’re quite vulnerable and asking for a photo is just something that … you really have to be careful about,” said Kasaian. “I didn’t need to take a portrait of them. … It felt as if I had made new friends with them at that point and that mutual respect was there. I didn’t want to tarnish that.”

Older Ukrainians Choose to Stay Behind

During Kasaian’s stay, he saw a few Ukrainian towns along the Poland border that had a few shops and stores open. The people who stay behind were often elderly, clinging tightly to their homes and the Ukrainian ground.

“If you think about it, you know, our grandparents or our older relatives, they’re very stuck in their ways,” said Kasaian. “They’re very resilient, stubborn to an extent … and you know, it plays the same over there.

“That is their country and they’re not going to leave because of what (the Russians) are doing there. They are holding fast and I think they’ll hold out till the very last minute.” 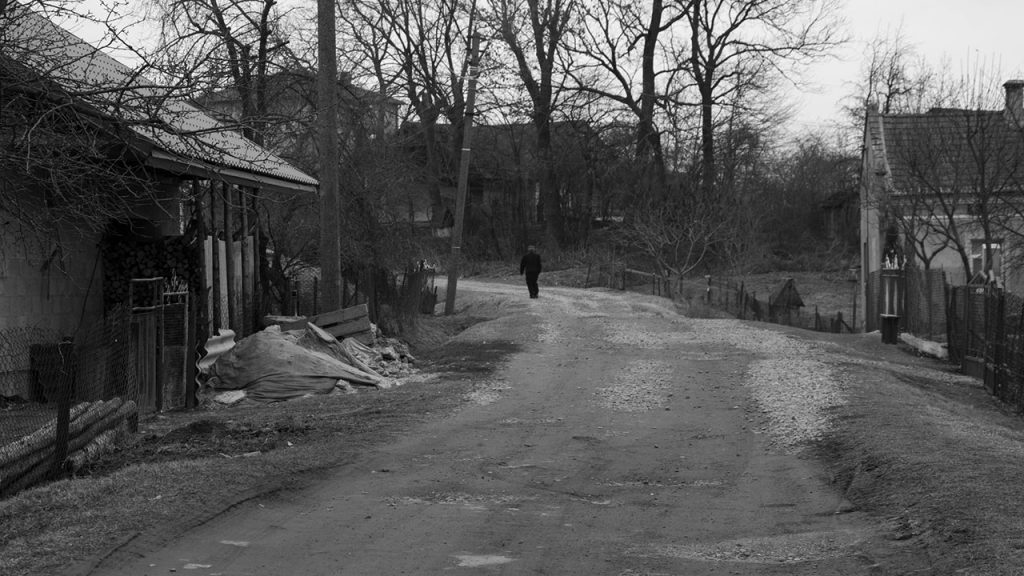 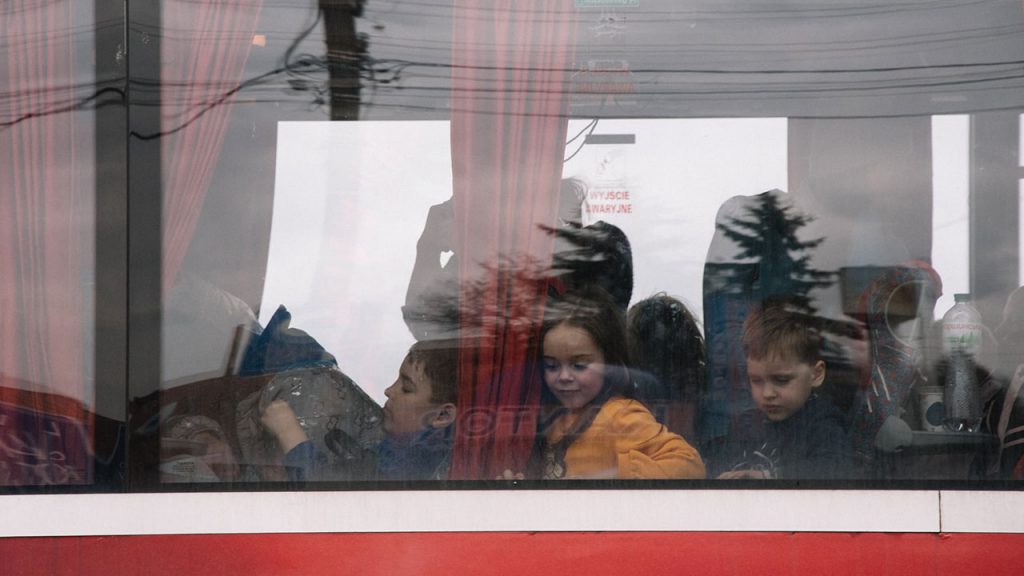 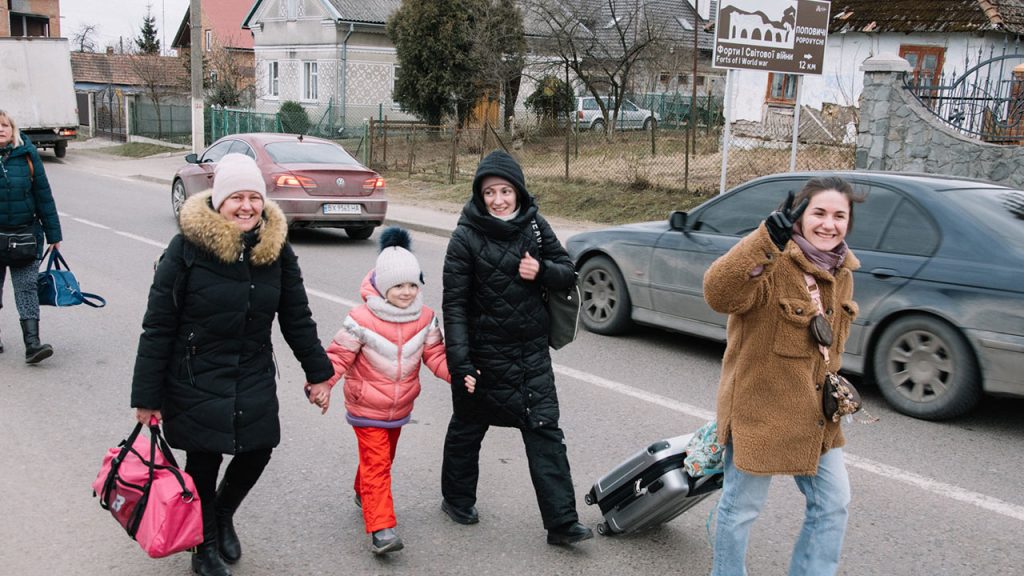 Faces full of joy and relief can be glimpsed as this group of Ukrainians reaches safety in Poland. (John Kasaian)

One of Kasaian’s friends who is on the ground in eastern Europe started a GoFundMe account to help provide aid, food, clothing, and other critical equipment to Ukrainians. To donate click here.