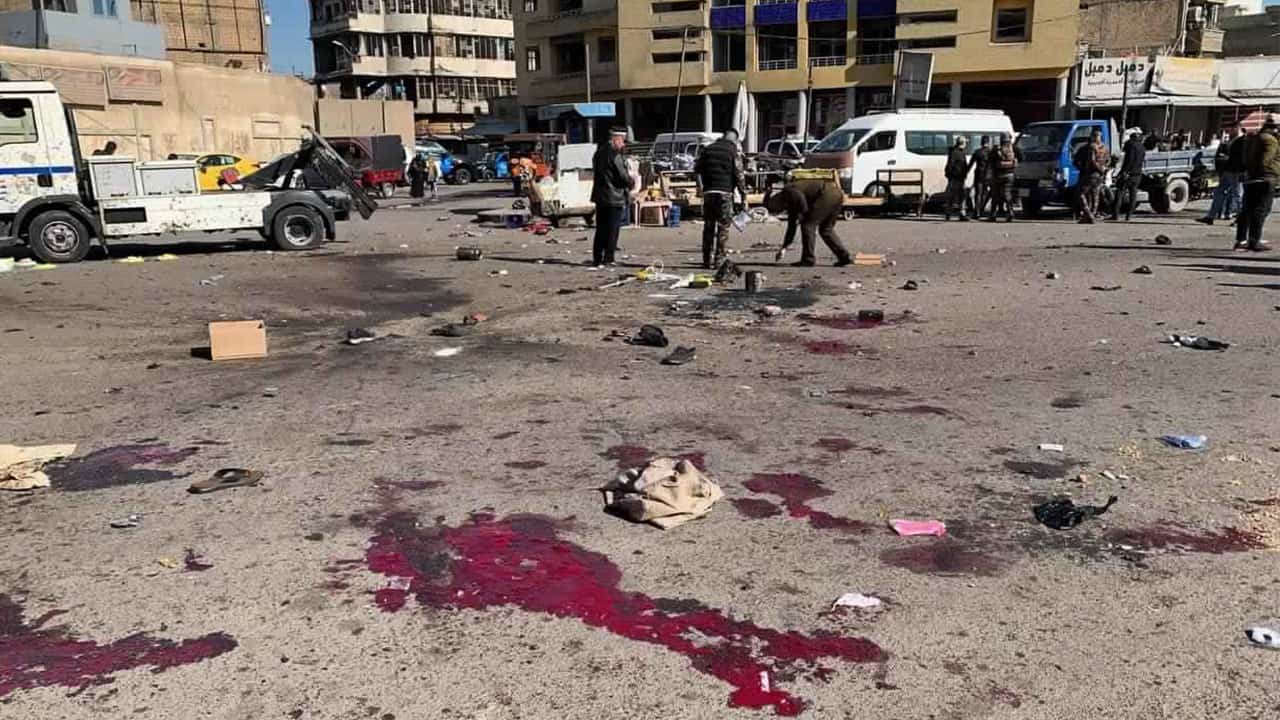 BAGHDAD — Twin suicide bombings ripped through a busy market in the Iraqi capital on Thursday, killing at least 32 people and wounding dozens, officials said in what was the first massive bombing in years, harkening back to darker days of rampant militant attacks.

The rare suicide bombing hit the Bab al-Sharqi commercial area in central Baghdad amid heightened political tensions over planned early elections and a severe economic crisis. Blood was splattered on the pavement of the busy market amid piles of clothes and shoes as survivors took stock of the disarray in the aftermath.

By sundown, crowds reappeared at the site of the deadly attack, carrying the coffins of the deceased in a show of defiance. Many questioned the timing of the attack, which occurred a day after President Joe Biden was sworn into office. The U.S.-led coalition recently ceased combat activities and is gradually drawing down its troop presence in Iraq, sparking fears of an IS resurgence.

No one immediately claimed responsibility for the attack, but Iraqi military officials said it was the work of the Islamic State group.

Iraq’s health minister Hassan Mohammed al-Tamimi said at least 32 people were killed and 110 were wounded in the attack. He said some of the wounded were in serious condition. Iraq’s military previously put the number of dead at 28. The Health Ministry announced that all of its hospitals in the capital were mobilized to treat the wounded.

Maj. Gen. Tahsin al-Khafaji, spokesman for the Joint Operations Command, which includes an array of Iraqi forces, said the first suicide bomber cried out loudly that he was ill in the middle of the bustling market, prompting a crowd to gather around him — and that’s when he detonated his explosive belt.

The second detonated his belt shortly after, he said.

“This is a terrorist act perpetrated by a sleeper cell of the Islamic State,” al-Khafaji said. He said IS “wanted to prove its existence” after suffering many blows in military operations to root out the militants.

At the Vatican, Pope Francis denounced the attack in Baghdad as a “senseless act of brutality” and urged Iraqis to keep working to replace violence with fraternity and peace. The telegram of condolences sent to the Iraqi president was particularly heartfelt, given Francis is due to visit Iraq in early March to try to encourage the country’s Christian communities that have been devastated by IS persecution.

Iraq has seen assaults perpetrated by both the Islamic State group and mostly Shiite militia groups in recent months. Militias have routinely targeted the American presence in Iraq with rocket and mortar attacks, especially the U.S. Embassy in Baghdad’s heavily fortified Green Zone. The pace of those attacks, however, has decreased since an informal truce was declared by Iran-backed armed groups in October.

The style of Thursday’s assault was similar to those IS has conducted in the past. But the group has rarely been able to penetrate the capital since being dislodged by Iraqi forces and the U.S.-led coalition in 2017. For some it brought back painful memories from the height of Iraq’s sectarian street wars, when suicide bombings were a near-daily occurrence.

IS has shown an ability to stage increasingly sophisticated attacks across northern Iraq, where it still maintains a presence, three years after Iraq declared victory over the group.

Iraqi security forces are frequently ambushed and targeted with IEDs in rural areas of Kirkuk and Diyala. An increase in attacks was seen last summer as militants took advantage of the government’s focus on tackling the coronavirus pandemic.

The twin bombings Thursday came days after Iraq’s government unanimously agreed to hold early elections in October. Prime Minister Mustafa al-Kadhimi had announced in July that early polls would be held to meet the demands of anti-government protesters.

Demonstrators took to the streets in the tens of thousands last year to demand political change, and an end to rampant corruption and poor services. More than 500 people were killed in mass demonstrations as security forces used live rounds and tear gas to disperse crowds.

Iraq is also grappling with a severe economic crisis brought on by low oil prices that has led the government to borrow internally and risk depleting its foreign currency reserves. The Central Bank of Iraq devalued Iraq’s dinar by nearly 20% last year to meet spending obligations.

Related Topics:Iraqsuicide bombings
Up Next