STEPANAKERT, Nagorno-Karabakh — People who are sick with the coronavirus pack into chilly basements alongside the healthy to hide from artillery fire. The local health minister who tested positive keeps working, despite a fever and pneumonia. Doctors with the virus perform surgery on the wounded.

These are the grim realities of the pandemic in Nagorno-Karabakh, a separatist region in the South Caucasus mountains beset by weeks of heavy fighting between Armenian and Azerbaijani forces.

“We just don’t have time to think about coronavirus,” said Irina Musaelyan, a resident of the regional capital of Stepanakert who was sheltering in a basement with her neighbors.

Nagorno-Karabakh lies within Azerbaijan but has been under the control of ethnic Armenian forces backed by Armenia for more than a quarter-century. It is facing the largest escalation of fighting since a war there ended in 1994, with hundreds killed since Sept. 27. Two attempts at cease-fires have failed.

The fighting has diverted the region’s scarce resources from containing the virus, which spread unchecked amid artillery fire and drone attacks that have people spending many hours in overcrowded bunkers, whether they are sick or healthy. Contact tracing has ground to a halt.

“Almost everyone got infected. Some had it in a light form and others in a more serious one,” Dr. Malvina Badalyan, head of the infectious disease clinic in Stepanakert, said of the region’s health workers. 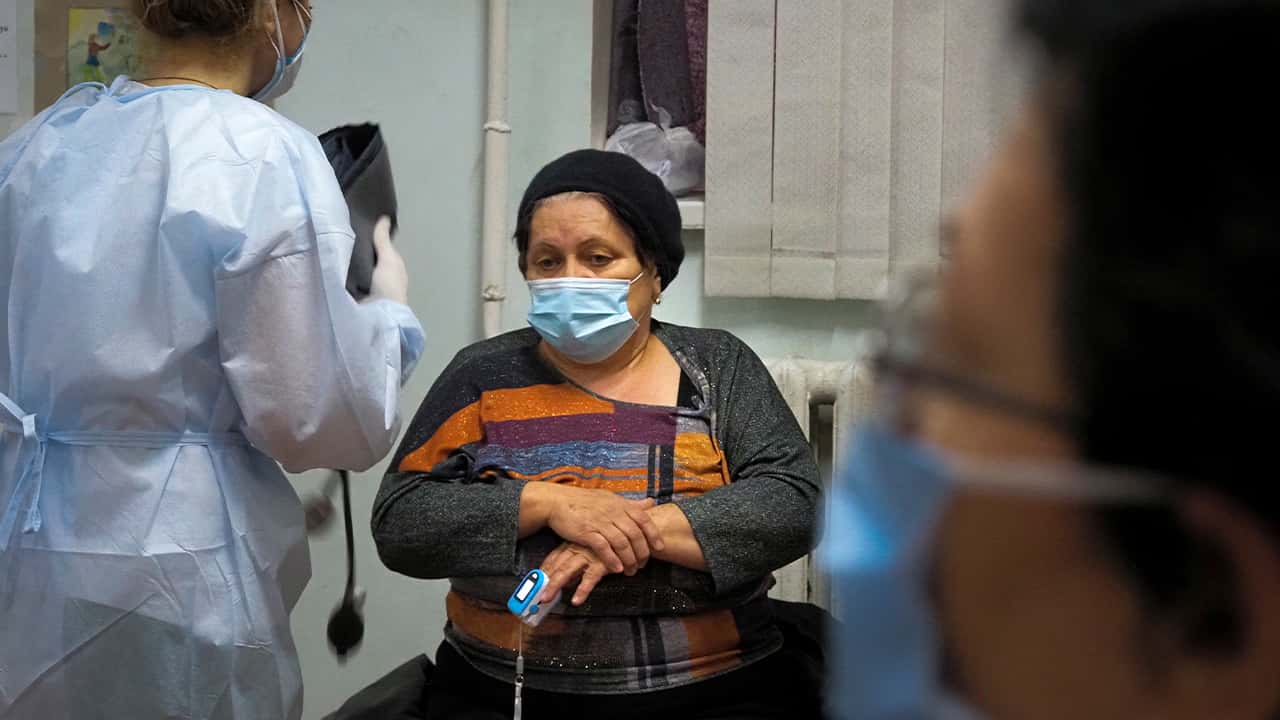 Armenian medical workers examine a patient with suspected coronavirus in an infectious diseases clinic in Stepanakert, the separatist region of Nagorno-Karabakh, Tuesday, Oct. 20, 2020. Nagorno-Karabakh, which lies within Azerbaijan but has been under the control of ethnic Armenian forces since a war there ended in 1994, faces an outbreak of the coronavirus amid the largest outbreak of hostilities in more than a quarter-century. (AP Photo)

But in the middle of a war, with wounded flooding into hospitals, there’s nothing to do but keep working.

“Many doctors and nurses knew that they were infected, but they kept mum about it,” said Ararat Ohanjanyan, the health minister for Nagorno-Karabakh’s regional government. “They may lie down in a corner to bring the fever down and then get up and continue to perform operations.”

“No one has the right now to step aside,” he added.

When the the latest escalation of fighting started, medical workers had no time or resources to deal with the outbreak, Ohanjanyan said.

“We didn’t have time to track down those infected while Stepanakert came under heavy shelling, and it allowed contagion to spread,” he said.

Ohanjanyan himself tested positive for the virus just over a week ago — and he, too, has continued working despite a fever and pneumonia.

In the past week, the shelling of Stepanakert has become less intense and ambulance crews have finally been able to visit shelters and basements to track down the sick, Ohanjanyan said, adding that regular testing and isolation of those infected has resumed.

Patients in the most serious condition have been sent to Armenia, while others have been admitted to hospitals or are treated at home.

Ohanjanyan said authorities still don’t have a good handle on how many people are infected.

Armenia, which supports the separatist region via a land corridor, has also seen a sharp increase in cases in recent weeks. The seven-day rolling average of daily new infections has nearly tripled since early October to 44 per 100,000 people on Oct. 20.

As Nagorno-Karabakh’s medical system faced the massive challenge, residents and health workers alike volunteered to deliver medicine to people sheltering in basements and to help track down those who are sick.

Dr. Aram Gregorian, who volunteered to visit those hunkered down during the shelling, said the cramped conditions in shelters helped fuel the spread of the virus.

“Constant shelling forces people to stay in tight groups in basements, and they can’t self-isolate,” he said. “Even those who have a fever and clinical signs of COVID-19 can’t get treatment or go to the hospital.”

Even coronavirus patients at the infectious disease clinic have been forced to seek shelter in the basement.

Arevik Israelyan, who was visiting her virus-stricken husband at the clinic, said the outbreak is a challenge, but people are mostly worried about the war.

“People get infected, but we will live through it,” she said. “The main thing is that there is no war.”