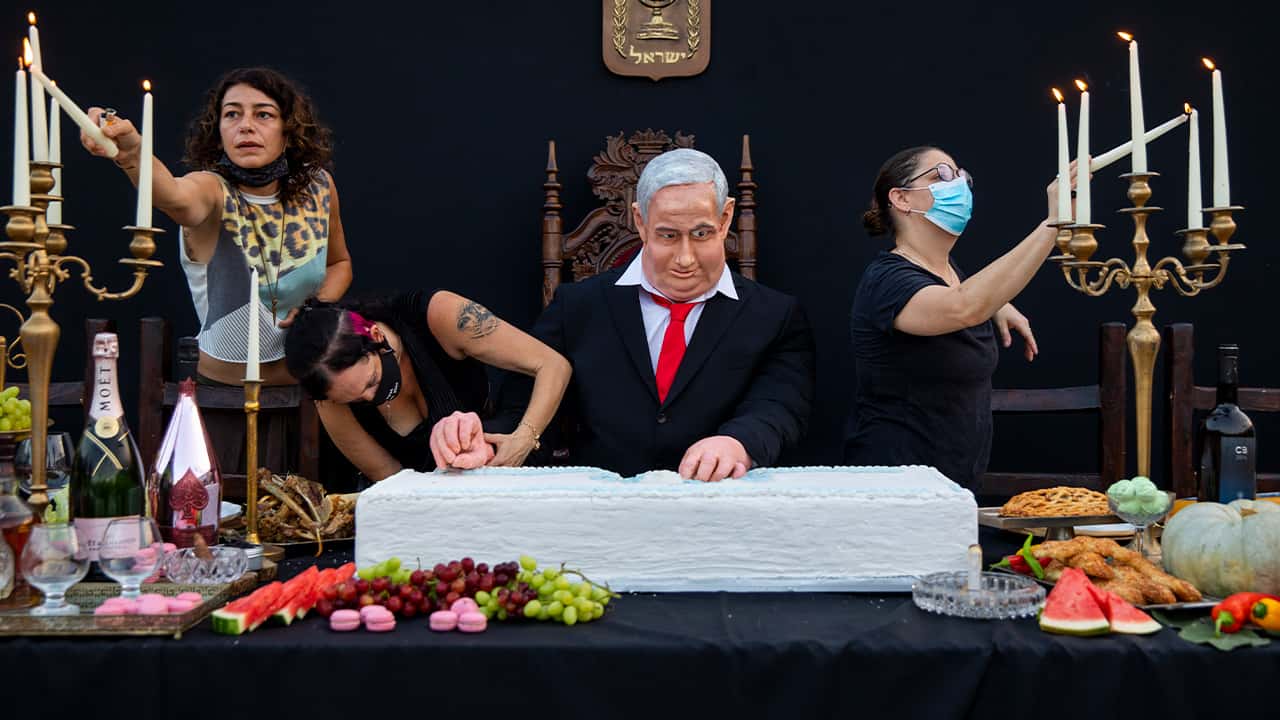 TEL AVIV, Israel — Residents of Tel Aviv woke up Wednesday to a jarring sight: a pop-up exhibit of a life-sized statue of Israeli Prime Minister Benjamin Netanyahu enjoying a lavish meal by himself at a sprawling table, in a sendup of Leonardo da Vinci’s “The Last Supper.”

Zalait Said He Found the Imagery Particularly Poignant at a Time

“You have the prime minister of Israel sitting in the center of the table and grabbing and sucking all this rich food to himself. Now he’s practically finished this meal and he’s now at the stage of the dessert, which is referring to the last minutes of time we can do something to save Israeli democracy,” Zalait said.
Zalait said he found the imagery particularly poignant at a time when unemployment has skyrocketed and tens of thousands of families are struggling because of the coronavirus restrictions that have battered Israel’s economy.
The message resonated with Tel Aviv resident Sharon Toval.
“Everyone hopes that this is really Bibi’s last supper. The corruption and disgust are suggested by the disgusting abundance of so much food with meat and milk and cream and sweets, Toval said.
It’s not the first time Zalait has taken to life-size art to express his opinion. Two years ago, he erected a statue of Israel’s then-culture minister, Miri Regev, wearing a long white dress and staring into a full-length mirror. The depiction was meant to protest Regev’s calls for legislation requiring artists to show “loyalty” to the state.
Before that, he built a golden statue of Netanyahu to mock what he said was the idolatry of many Israelis toward the longtime leader.
Regev, currently the country’s transportation minister, called Zalait’s latest public exhibit incitement to violence.
“Is someone suggesting that the prime minister’s future be that of the diner at the Last Supper?” she wrote on Twitter. “It’s only a matter of time until there is an exhibit of the gallows and a rope.”
Lawmaker Tamar Zandberg of the leftist Meretz party responded to Regev and others by saying that rather than condemning a work of art, it would be more appropriate for them to denounce the violence their supporters have directed recently against peaceful protesters on the streets.