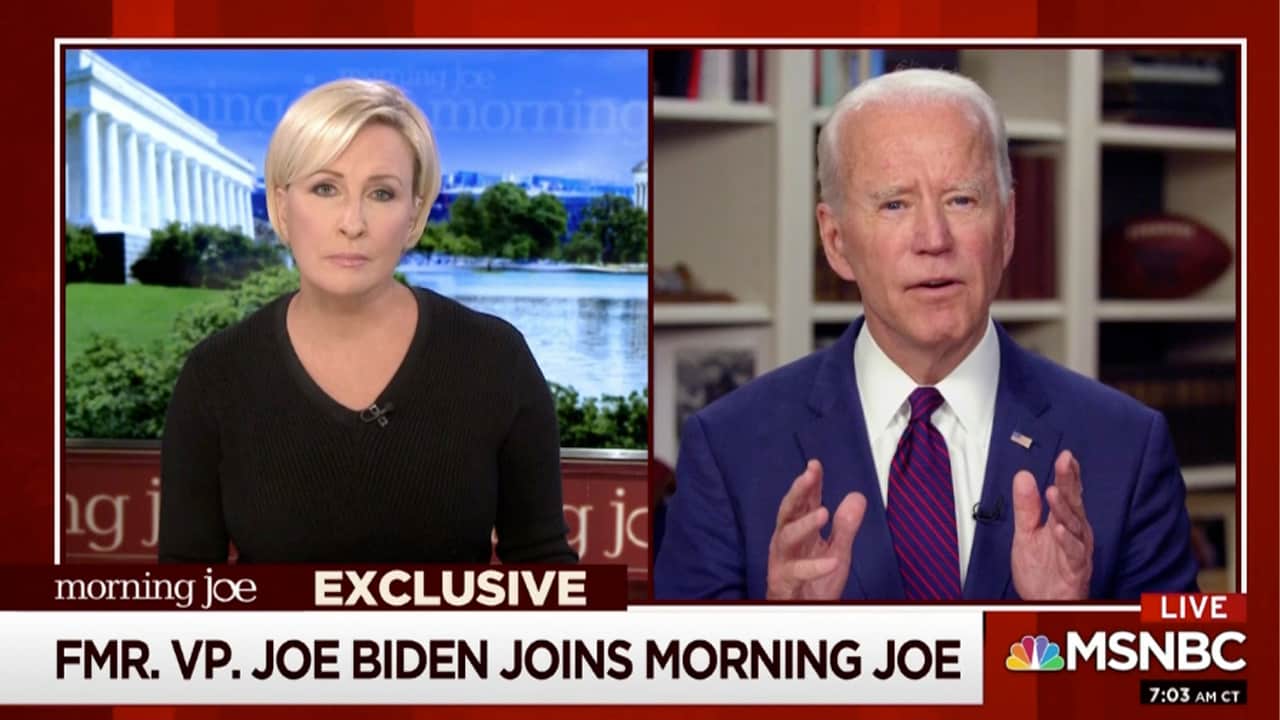 WASHINGTON — Democratic presidential candidate Joe Biden on Friday categorically denied allegations from a former Senate staffer that he sexually assaulted her in the early 1990s, saying “this never happened.”

Biden’s first public remarks on the allegation by a former employee, Tara Reade, come at a critical moment for the presumptive Democratic nominee as he tries to relieve mounting pressure after weeks of leaving denials to his campaign.

Biden said he will ask the National Archives to determine whether there is any record of a complaint being filed, as Reade has claimed, but he said repeatedly that he doesn’t believe such a record exists.

Biden said he will ask the National Archives to determine whether there is any record of a complaint being filed, as Reade has claimed, but he said repeatedly that he doesn’t believe such a record exists.

“The former staffer has said she filed a complaint back in 1993,” Biden said. “But she does not have a record of this alleged complaint. The papers from my Senate years that I donated to the University of Delaware do not contain personnel files.”

Biden said, “There is only one place a complaint of this kind could be – the National Archives.”

The former vice president said “there are so many inconsistencies” in Reade’s various accounts. But Biden said he does not “question her motive.” He said that over his five decades in public life, none of his employees, including Reade, were asked to sign nondisclosure agreements.

Democrats Are in an Awkward Position

“There’s no NDA signed,” Biden said. “No one’s ever signed, I’ve never asked anybody to sign an NDA. There are no NDAs, period, in my case. None.”

Republicans worried about President Donald Trump’s increasingly precarious political standing are seizing on Reade’s allegation to portray Democrats as hypocrites who only defend women who allege wrongdoing against conservatives. They are digging in despite the fact that it could renew attention on the multiple sexual assault allegations lodged against Trump.

Democrats, meanwhile, are in an awkward position of vigorously validating women who come forward with their stories while defending the man who will be their standard-bearer in what many in the party consider the most important election of their lifetimes.

Former Democratic National Committee Chairwoman Donna Brazile said before Biden’s interview that his silence had been “damaging,” but said he handled the matter well Friday.

“He responded, he denied it, and there’s nothing more to be added to it,” Brazile said, before alluding to Reade’s repeated interviews and tweets. “If you add to the story the way Tara Reade has, it only brings more confusion.”

The November contest between Biden and Trump will be the first presidential race of the #MeToo era, which has led numerous women to come forward with allegations of sexual assault. Trump has been accused of assault and unwanted touching by numerous women, allegations he denies.

‘Women Deserve to Be Heard’

Women are a core constituency for Democrats, and Biden has a mixed history. While he wrote the Violence Against Women Act as a senator, he also came under heavy criticism for his handling of Anita Hill’s Senate testimony in the 1990s. Just before he launched his 2020 campaign, several women accused him of unwanted touching, behavior for which he apologized.

Some Democratic donors and fundraisers say the issue has not come up in calls with party financiers. Others worry that it could be used against Biden, much as Hillary Clinton’s private email server and the activities of the Clinton Foundation were wielded against her by Trump.

Biden has pledged to pick a woman as a running mate, and the allegation has left those thought to be in contention in a tough spot.

“Women deserve to be heard,” said Stacey Abrams, the former Georgia Democratic governor candidate, “but I also believe that those allegations have to be investigated by credible sources.”

That echoed talking points issued by the Biden campaign to surrogates last week that were obtained by The Associated Press. They pointed to investigations by The New York Times, The Washington Post and the AP that found no other allegation of sexual assault and no pattern of sexual misconduct.

Some Democratic donors and fundraisers say the issue has not come up in calls with party financiers. Others worry that it could be used against Biden, much as Hillary Clinton’s private email server and the activities of the Clinton Foundation were wielded against her by Trump.

Some female Democratic operatives expressed concerns the allegation is particularly damaging because it’s an indictment of Biden’s central campaign rationale: that he provides a moral counter to Trump.

“The stakes could not be higher for defeating Donald Trump — but at the same time, I think we have to apply a consistent standard for how we treat allegations of sexual assault, and also be clear-eyed about how Donald Trump will use these allegations in the general election campaign,” said Claire Sandberg, who worked as Bernie Sanders’ organizing director.

Republicans are trying to take advantage of an issue that was, in 2016, more fraught when Trump was asked to answer for the more than two dozen women who alleged varying levels of sexual assault and harassment. Senate Majority Leader Mitch McConnell told Fox News on Thursday that Biden will “have to participate in releasing all the information related to” the allegation, a stance he didn’t take on the allegations against Trump.

The GOP argues Democrats aren’t being consistent, pointing to aggressive questioning of Supreme Court nominee Brett Kavanaugh when he faced an allegation of sexual assault.

Biden on Friday pushed back on those notions. Biden said “women are to be believed, given the benefit of the doubt. If they come forward … they should start off with the presumption the presumption they are telling the truth. Then you have to look at the circumstances and the facts. And the facts of this case do not exist.”

Trump said Thursday Biden “should respond” but added, “I know all about false allegations.”

“Ladies and gentleman, we just can’t have it both ways,” Trump spokeswoman Kellyanne Conway said Friday at the White House. “We cannot decide which women were included in ‘believe all women.’”

Asked whether that will refocus attention on Trump’s history with women, Conway said, “If you do that, then you’re going to hear a lot from Tara Reade and other people.”

Brand: ‘We Will Be Opening up Businesses We Think Are Low Risk’