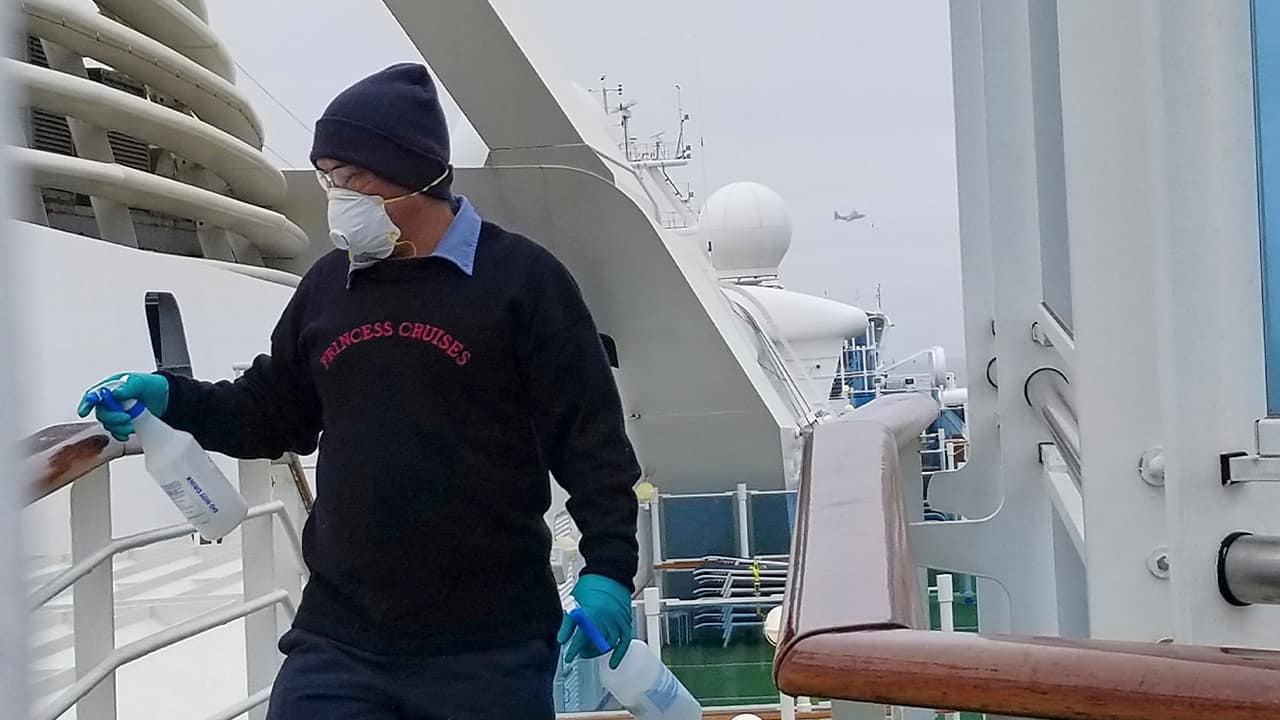 SAN FRANCISCO — Passengers on a cruise ship off the coast of San Francisco were instructed to stay in their cabins as they awaited test results Friday that could show whether the coronavirus is circulating among the more than 3,500 people aboard.

The Coronavirus Has Infected Around 100,000 People Worldwide and Killed Over 3,400

Nine of the dead were from the same suburban Seattle nursing home, now under federal investigation. Families of nursing home residents voiced anger, having received conflicting information about the condition of their loved ones. One woman was told her mother had died, then got a call from a staffer who said her mother was doing well, only to find out she had, in fact, died, said Kevin Connolly, whose father-in-law is also a facility resident.
“This is the level of incompetence we’re dealing with,” Connolly said in front of the Life Care Center in Kirkland.
The investigation will determine whether the nursing home followed guidelines for preventing infections. Last April, the state fined it $67,000 over infection-control deficiencies after two flu outbreaks.
The coronavirus has infected around 100,000 people worldwide and killed over 3,400, the vast majority of them in China. Most cases have been mild, and more than half of those infected have recovered.
Some major businesses in the Seattle area, where researchers say the virus may have circulated undetected for weeks, have shut down some operations or urged employees to work from home. That includes Microsoft and Amazon, the two tech giants that together employ more than 100,000 people in the region.
King County is buying a motel for $4 million to house patients and hopes to have the first of them in place within days at the 84-room EconoLodge in Kent, about 20 miles (32 km) from Seattle. The rooms’ doors open to the outside rather than to a central hallway, reducing the likelihood of contact between patients.
The plan was met with resistance from local leaders, including Kent Police Chief Rafael Padilla, who called it “ill-advised and dangerous” and warned: “At any point a patient can simply walk into our community and spread the virus.” A helicopter carrying airmen with the 129th Rescue Wing flies over the Grand Princess cruise ship off the coast of San Francisco on Thursday. (California National Guard via AP)

Around the country, New York’s mayor implored the federal government to send more test kits to his state, which on Thursday saw its caseload double overnight to 22, all of them in or near the city. Gap closed its New York office and asked employees to work from home until further notice after learning that an employee had the virus.
In Rhode Island, about 200 people were quarantined because of their connections to a school trip to Italy that has so far resulted in three cases. Amid four cases in Florida, Gov. Ron DeSantis said the risks remain low for most people planning trips to the state for spring break or baseball’s spring training.
On Wall Street, fears about the outbreak led to a sharp selloff Thursday, with the Dow Jones Industrial Average falling 970 points, or 3.6%. The drop extended two weeks of wild swings in the market, with stocks fluctuating 2% or more for the fourth day in a row.
A Sacramento-area man who sailed to Mexico on the Grand Princess in February later succumbed to the coronavirus. Two other passengers from that voyage have been hospitalized with the virus in Northern California, and two Canadians tested positive after returning home, officials said.
The ship off California was returning to San Francisco after visiting Hawaii. Some of the passengers remained on board after sailing on its previous voyage, to a string of Mexican ports.
Princess Cruises said that no cases of the virus had been confirmed among those still on the ship. But three dozen passengers have had flu-like symptoms over the past two weeks or so, said Mary Ellen Carroll, executive director of San Francisco’s Department of Emergency Management.
“Once we have results from the tests,” she said, authorities “will determine the best location for the ship to berth.”

‘Spirits Are as High as Can Be Under These Circumstances’

Michele Smith, a Grand Princess passenger, posted video on Facebook of the helicopter that arrived at the ship. Another video showed a crew member wearing gloves and a mask and spraying and wiping a handrail.

Trump Signs $8.3B Bill to Combat Coronavirus Outbreak in US