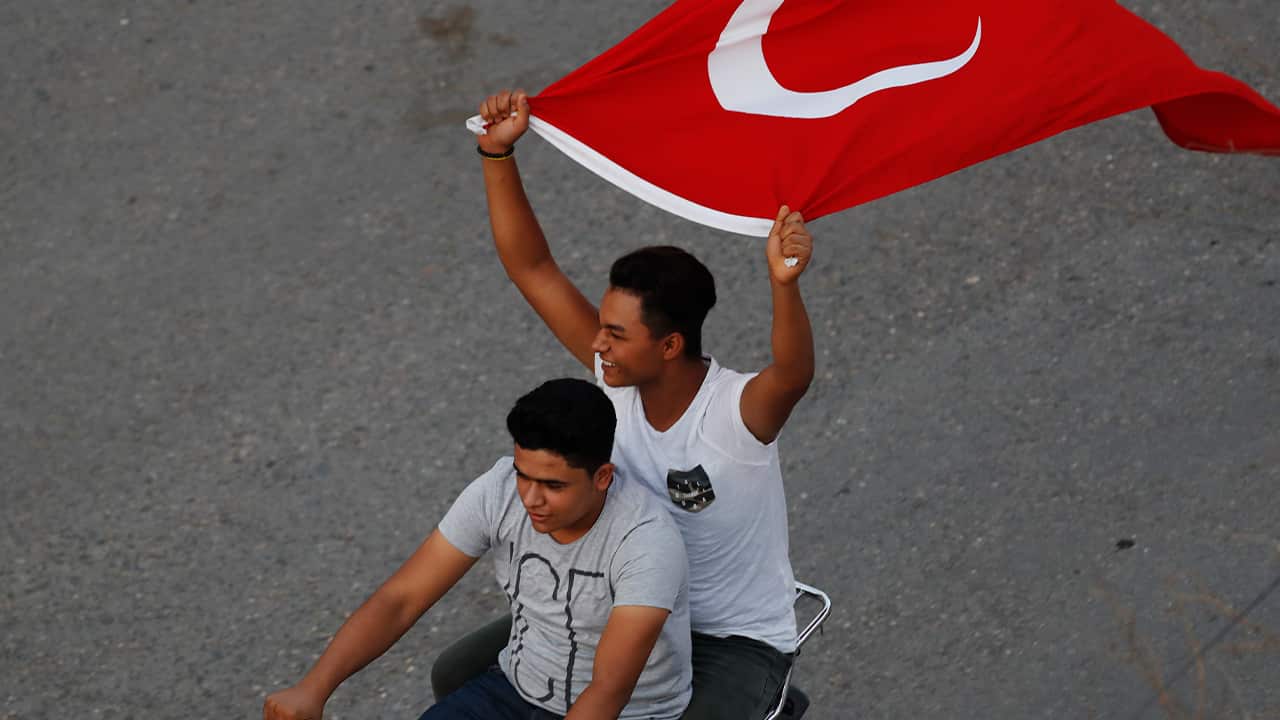 AKCAKALE, Turkey — National soccer team players give military salutes during international matches, Turkish flags flutter from balconies and storefronts, songs extolling the glory days of the Ottoman Empire blare from a border town’s loudspeakers, punctuated by the occasional boom of outgoing artillery.
Since Turkey announced its incursion into neighboring Syria to clear out Kurdish fighters last week, patriotic sentiment has run high — as has bewilderment and anger at the overwhelmingly negative international reaction to Ankara’s actions.


Related Story: Russia Moves to Fill Void Left by US in Northern Syria

“At times of this kind of Turkish operation, we as Turkish people feel prouder about our nation,” said Cuma Gunay, a 47-year-old supermarket owner in the town of Akcakale, which sits on the border with Syria.
A Turkish flag hangs above his shop entrance, and he keeps another behind his desk. “We are proud of our flag, that’s why we hang it on our homes and shops. And it’s also to support the Turkish army for our fight in Syria.”
His town has been hit by mortar rounds since the Turkish offensive began, causing damage but no deaths, although there have been 20 civilian deaths elsewhere in Turkey from mortar attacks. Turkish-backed Syrian fighters occasionally drive across the border from the battlefield, flashing victory signs and chanting “Allahu Akbar” — God is great — from the back of their pickup trucks.

Just across the border lies the Syrian town of Tal Abyad, which fell to Turkish-backed forces Sunday, although sporadic fighting has continued and Turkish forces were still firing artillery from Akcakale on Tuesday. Erdogan Launched a Public Relations Offensive and Blasted His Critics

But the offensive has led to an international outcry while causing tens of thousands to flee their homes and upending alliances in Syria’s eight-year war. Having suddenly lost U.S. support, the Syrian Kurdish fighters have turned to Syrian President Bashar Assad to help them fend off Turkey’s invasion, setting the stage for a potential military confrontation between Turkey and Syria.
Faced with a backlash, Erdogan launched a public relations offensive and blasted his critics, telling the EU he would “open the doors and send you 3.6 million refugees” if his Syria operation was described as an invasion.
That appears to have had little effect abroad. But at home many have rallied behind their president, and some appear genuinely taken aback by the international opprobrium raining down on Erdogan.


Related Story: US Troops Scramble for the Exits in Syria

“Although Turkey is right to fight against terrorist organizations, European countries and America, all of them are against this operation and against Turkey. Why?” asked Gulenc, in a query often echoed in Akcakale. “Don’t they know that this land is not owned by terrorist organizations? It’s the land of Syria. So don’t these countries know that America is bringing these terrorist organizations to this region for a purpose?”
All opposition parties, bar the pro-Kurdish People’s Democratic Party, have voiced support for the offensive.
Criticism is not tolerated.

There Was Also a Backlash Against Mustafa Akinci

Last week, Interior Minister Suleyman Soylu said 121 people had been detained for social media posts critical of the incursion while some 500 people were under investigation for posts characterizing Turkey as an “invading” force and “insulting” the operation under Turkey’s broad anti-terrorism laws.