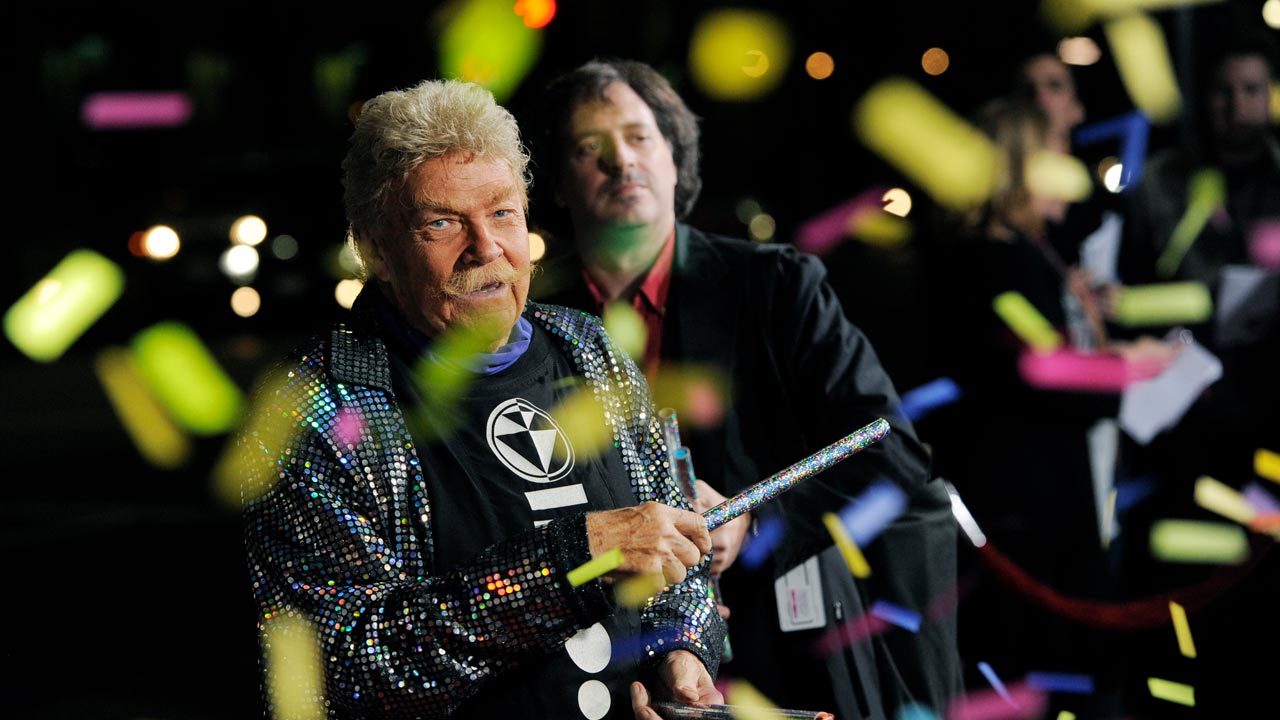 LOS ANGELES — Rip Taylor, the madcap mustached comedian with a fondness for confetti-throwing who became a television game show mainstay in the 1970s, has died. He was 88.
Taylor died Sunday in Beverly Hills, publicist Harlan Boll said.


His ascent began with spots on “The Ed Sullivan Show,” where he was known as the “crying comedian.”
The man who would become known worldwide as Rip did not have a direct line into show business. He was born Charles Elmer Taylor Jr. in Washington, D.C., to a waitress and a musician and first worked as a congressional page before serving in the Army during the Korean War, where he started performing standup.

Begged for Laughs in the Beginning

His ascent began with spots on “The Ed Sullivan Show,” where he was known as the “crying comedian.” The moniker pre-dated his television stints, however, and went back to his time in the Catskills.
“I sat on a stool telling jokes, and nobody was laughing,” he told UPI in 1992. “In desperation, I pretended to cry as I begged them to laugh. That killed ’em.”
It’s where he said the character “Rip” came from.
Although he readily admitted stealing jokes from USO shows, the crying comedian bit got him to Ed Sullivan, where the host — forgetting Taylor’s name — would say “get me the crying comedian.”
Success begat more success, and Taylor ended up on tour with Judy Garland and Eleanor Powell in Las Vegas in 1966.

In his over five decades in entertainment, Taylor would make over 2,000 guest star appearances on shows like “The Monkees,” ”The Merv Griffin Show,” ”The Tonight Show,” ”Late Night with David Letterman,” ”Hollywood Squares” and “The Gong Show.” He also hosted the beauty pageant spoof “The $1.98 Beauty Show.”
With his bushy blonde toupee, exaggerated eyebrows and walrus-like mustache, Taylor was a striking presence. He was apparently so proud of his star on the Hollywood Walk of Fame that he’d regularly schedule trips to buff and clean the square at 6625 Hollywood Boulevard.
Taylor also did a fair share of voice work for animated films and television like “The Jetsons” and “The Addams Family,” as Uncle Fester, which earned him an Emmy nomination.

He played himself in movies like “Wayne’s World 2” and the “Jackass” movies, appeared on stage in “Anything Goes,” ”A Funny Thing Happened on the Way to the Forum,” ”Sugar Babies,” where he took over for Mickey Rooney, as Fagin in “Oliver!” and Captain Hook in “Peter Pan.” Taylor also wrote and performed an autobiographical one-man play called “It Ain’t All Confetti.”
Taylor reflected in that same 1992 interview that he always considered himself an actor.
“Rip is funny because he’s crazy. Every night on stage, he’s cornered and put-upon,” Taylor said. “That’s what I am bringing into play as a straight actor.”
He is survived by his longtime partner Robert Fortney. In lieu of flowers, they ask that donations be made to the Thalians, a charitable organization that Taylor supported that is dedicated to mental health issues.
Correction: An earlier version of this story stated that Taylor was 84 at the time of his death.