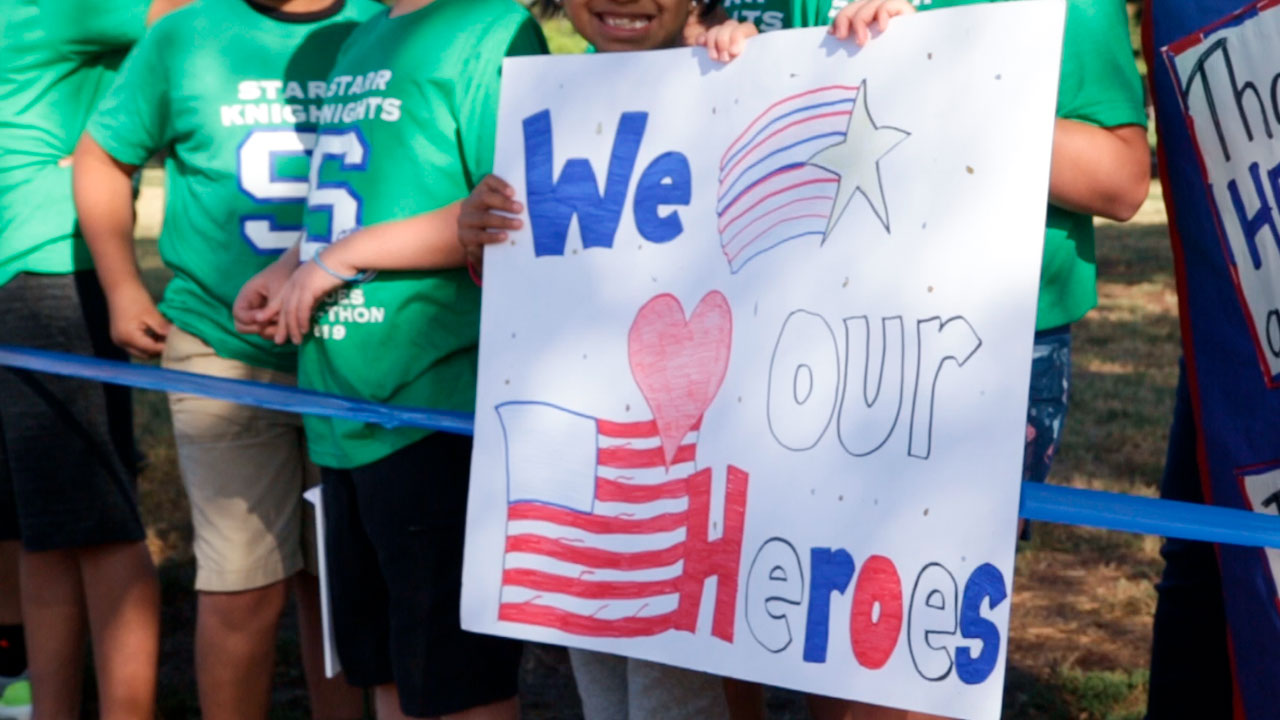 Starr Elementary School said “thank you for your service” in a big way Friday to active duty military and veterans, police, fire, and other first-responders before the start of the school’s annual “Heroes Jog-a-thon” fundraiser.
The field behind the school was bedecked with American flags, balloons, and brightly colored handmade banners of thanks as students from grades kindergarten through sixth clustered with their classmates around the edge of a running oval.

Listen to this article:
Some left their classmates to stand next to a dad, father, grandfather, great-grandfather or uncle: war veterans, an active-duty soldier in the Army National Guard, police officers from Fresno and Corcoran, firefighters. The military veterans had served in at least four wars — World War II, Korea, Vietnam, and Iraq — and in the Army, Navy, Marines, Air Force, and Coast Guard.
This year’s guest of honor was Fresno Police Corp. John Banuelos Jr., a Starr alum and father of two Starr students, third-grader Darren and first-grader Ryan.
“It’s a huge honor,” Banuelos told GV Wire. “It’s very touching that the school still celebrates heroes like this.”

‘A Great Way to Celebrate Freedom’

Principal Charlie Reynolds, who came to the northwest Fresno school 11 years ago, said the school used to celebrate Patriot Day honoring the memory of 9/11 victims in the fundraiser’s opening ceremony but then decided to honor the military and first-responders.

And that celebration included a whole lot of running. Each grade level took turns galloping around an oval set up in a field next to the school, raising funds for each lap they ran — as marked on their hands by volunteers — or for lump sum donations by relatives, friends, and other community members.
The fundraiser typically nets tens of thousands of dollars that are used for fields trips and other school activities during the year, Reynolds said.
Kindergartners were the first to take off at a sprint, zipping around the course as they were cheered on by onlookers. “Smile — you’ll run faster,” a woman told them over the loudspeaker.
Thanks to sponsors, each child, school staffer, and volunteer was clad in a bright green Starr Knights T-shirts. Many of the kids were waving small American flags as they clustered around the oval running track.

Veterans Came Out to Celebrate