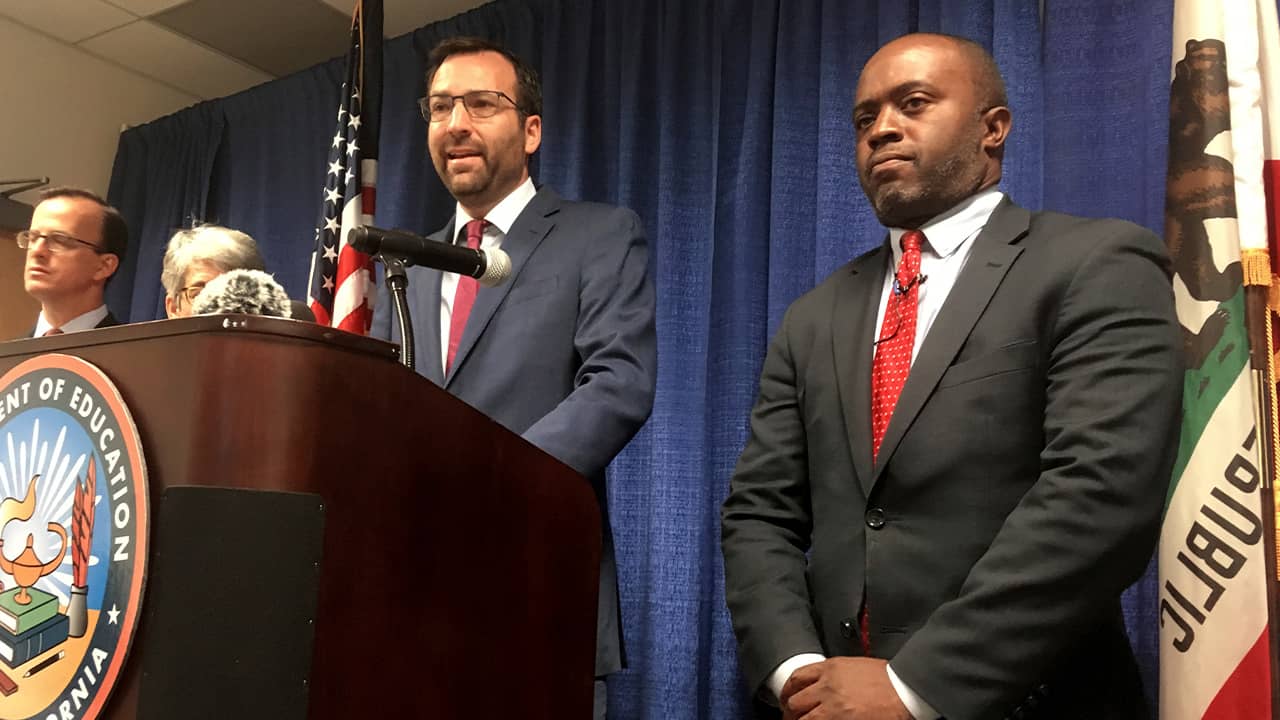 After feeling the heat in a scathing letter from Jewish lawmakers, California’s top elected education official says he hears them.
At a news conference Wednesday (Aug. 14), state Superintendent of Public Instruction Tony Thurmond vowed to include the Jewish experience in the state’s proposed curriculum on ethnic studies.
“Revisions to the model curriculum will be recommended to highlight the Jewish community and other ethnic groups in addressing the types of inequities that the curriculum seeks to help undo,” Thurmond said.
The proposed curriculum went to a state Board of Education advisory commission in May, and it’s seeking public comments through today (Aug. 15).
Commission members will consider the comments and changes at public hearings in Sacramento next month.

Curriculum Draws Critics From Across the Political Spectrum

Criticism of the proposed curriculum has come from conservatives and liberals alike, as California attempts to write the nation’s first ethnic studies curriculum for public schools. Ethnic studies view history through the lens of diverse cultures.
Jewish lawmakers complained that the lessons, as proposed, were anti-Semitic.
“We really need some significant changes, if not to go back to square one,” said Sen. Ben Allen (D-Santa Monica), at the news conference that also included the Jewish caucus. “Our concern is that the draft curriculum, as currently written, would literally institutionalize the teaching of anti-Semitic stereotypes in our public schools.”

Last month, the Legislative Jewish Caucus sent the advisory committee a highly critical letter complaining of exclusion, and charging that the language used to describe the Arab-American experience disparaged Israel. It also blasted the proposed curriculum’s mention of the BDS movement, which calls for boycott, divestment, and sanction of Israel based on its treatment of Palestinians.
In another instance, the proposed curriculum has lessons on identifying Islamophobia and other forms of discrimination but does not include ways to identify anti-Semitism. Song lyrics included in the draft also appeared to support the stereotype that Jews control the news media, the caucus said
“Children are not born as bigots, and so it’s critically important that we get this curriculum right,” Sen. Hannah-Beth Jackson (D-Santa Barbara) said.
The ethnic studies school plan came out of a 2016 law. A current bill in the Legislature would make the courses mandatory for high school graduation. It passed the Assembly and is awaiting debate in the Senate.
“The proposed ethnic studies model curriculum is dangerously flawed and should be trashed,” Assemblyman Marc Levine (D-Marin County) said. “I cannot support a curriculum that erases the American Jewish experience, fails to discuss anti-Semitism, reinforces negative stereotypes about Jews, singles out Israel for criticism and institutionalizes the teaching of anti-Semitic stereotypes in our public schools. I call upon the State Board of Education to reject this proposed curriculum and develop a proposal that incorporates the contributions of all Californians, including Jewish Americans.”

Other Groups Call for Inclusion

Thurmond said the omission of Jewish contributions was not intentional but that ethnic studies traditionally have focused on African Americans, Latinos, Asian and Pacific Islanders, and indigenous people.
He and Jewish lawmakers said there have been other requests to include Hindus and a section on the Armenian genocide. Allen suggested that white Europeans might learn empathy for immigrants today if there were a section on the discrimination that Italian and Irish nationals once faced in the U.S.
“There’s no limit on groups who have experienced oppression,” Thurmond said.
A group representing Jewish, Armenian, Greek, Hindu, and Korean organizations is asking for an ethnic studies rewrite.
“The draft lacks cultural competency, does not reflect California’s diverse population, and advances a political agenda that should not be taught as unchallenged truth in our state’s public schools,” the group said in a news release.
The Fresno-based Jakara Movement, representing Sikh interests, also tweeted about it.