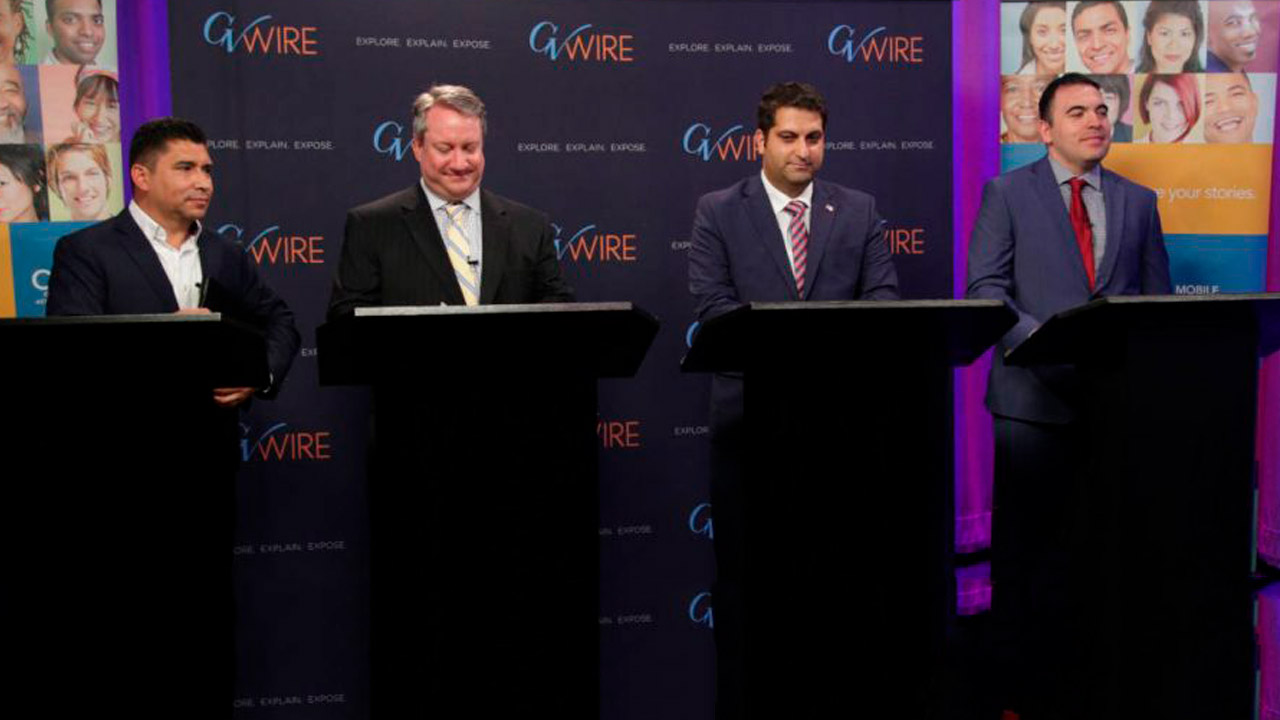 Less than two weeks from now, voters in northwest Fresno head to the polls to elect a new councilmember.
Four of the five candidates campaigning met during a GV Wire debate, which can be viewed here.

And the latest financials show that businessman Mike Karbassi has done well for himself when it comes to contributions.
The latest figures report fundraising through July 27. It is the last report prior to the Aug. 13 special election.
Karbassi has pulled in $162,938 on the campaign trail, with $24,207 coming from the July 1-27 period. He also has spent $93,624 in the latest period, 62% of his total during the cycle. Much of that has come from mailings and print advertising in The Fresno Bee.
Business owner Lawrence Garcia’s figures were slowing down. He reported a total of $76,513, but raised only $3,639 in the latest period, which included a July 18 fundraiser. He also reports he still owes nearly $58,000, much of it ($51,000) from loans to himself.
Attorney Jared Gordon’s numbers show him raising and spending plenty in the last reporting period. He has received $36,276 overall, with $11,331 coming July 1-27. He’s also spent $20,399 in that same period, 38% of his total spending during the election cycle. Gordon also loaned himself $17,631.
Community activist Oscar Sandoval is the only candidate not to break five digits in fundraising.
Through Thursday, the county clerk received 5,000 returned vote-by-mail ballots.

Note: a fifth candidate, George Herman, indicated he raised less than $2,000 in his campaign filings.

Meanwhile, in the District 4 race to elect the next representative in east-central Fresno, Nathan Alonzo has a healthy financial lead over Tyler Maxwell after the first reporting date covering the first six months of 2019.
They are the only two who have filed to run in the March 3, 2020 election. Alonzo has tripled Maxwell thus far, $100,064 to $33,530.
Some of Alonzo’s big contributors include former employers. Alonzo once worked as a staffer to former state Sen. Andy Vidak, whose committee contributed $4,400. The committee for the Fresno Chamber, another former Alonzo stomping ground, gave $4,000.
The man Alonzo hopes to replace, soon-to-be-termed-out Paul Caprioglio, contributed $4,700.
Maxwell’s big contributions have come from labor unions, including $5,000 from UA Local 246 Plumbers & Pipefitters committee, $4,700 from the Fresno City Employees Association PAC, and $2,000 each from the committees representing the Central Labor Council and the Operating Engineers Local No. 3 District 50.
Even Maxwell’s boss, city councilman Nelson Esparza, chipped in $2,000.

A changing of the chief for the Clovis Police Department takes place Monday. Curt Fleming will be sworn at the department headquarters. He succeeds the retiring Matt Bagsall, who ends his duty Friday.
In Fresno, the city is preparing to hire a new chief, with Jerry Dyer scheduled to retire in October. The city released survey responses gathered in the last few months, sending the answers to its recruiter to review.
Some of the responses:
What are the challenges you would like to see the chief address? Survey says (in my Richard Dawson voice): Gangs were the top answer, followed by homelessness.
What issues should the new chief be aware of and understand? Homelessness was the top response, followed by gangs.
Trustworthiness/honesty was the top quality people are looking for.
When asked what the city should consider when selecting the chief, respondents overwhelmingly want the most qualified person with a track record of improvement.
The city says meetings with candidates will take place in mid-August, along with interview panels consisting of city officials and community members.