All DMVs to Close 1 Day for Training. Will That Fix Long Lines? 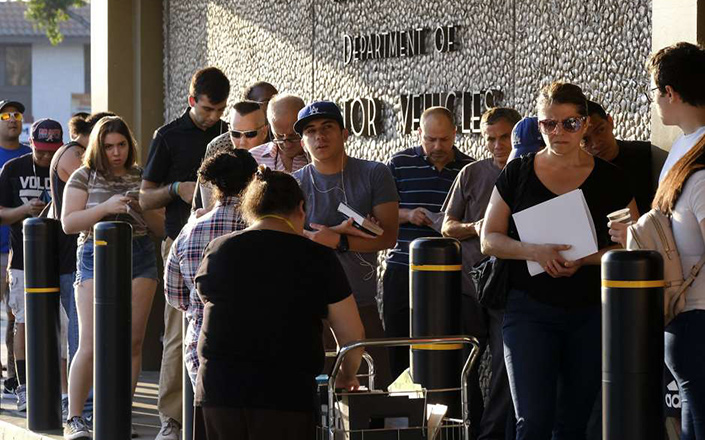 California’s Department of Motor Vehicles, slammed in a state audit for slipshod customer service and being poorly prepared for the rollout of federally approved driver’s licenses, will close its offices statewide for a half-day to train staff on doing a better job.

The angst surrounding Real ID was merely one lowlight of the DMV’s numerous weaknesses, which include outdated computers and problems with scheduling appointments, the audit said.

Assemblyman Jim Patterson, a Fresno Republican, has been one of the loudest critics of the DMV at the state Capitol. In a column written for Calmatters, Patterson said the department “has been a source of frustration for employees and customers for as long as anyone can remember.”

Days after the DMV audit was released, Gov. Gavin Newsom said he would seek $168 million to hire more than 1,100 new DMV employees and make other department improvements to reduce wait times and streamline the Real ID process. The funding is part of a major overhaul of the DMV that Newsom ordered in January.
The July 24 training is a part of what the DMV labels, without a hint of irony, Operation Excellence.
The department’s call centers will remain open while the offices are closed. The phone number is (800) 777-0133. People also will be able to make appointments, renew a vehicle’s registration, or change an address at the DMV website.
“The unprecedented complexity of the Real ID requirements is what led to … the extraordinary step of closing DMV offices for a short time to make sure all employees have consistent information in order to complete the transactions successfully,” Marybel Batjer, who is leading the Operation Excellence effort, said in a statement.
Related Topics:auditClovisDepartment of Motor VehiclesDMVGavin NewsomReal ID
Up Next