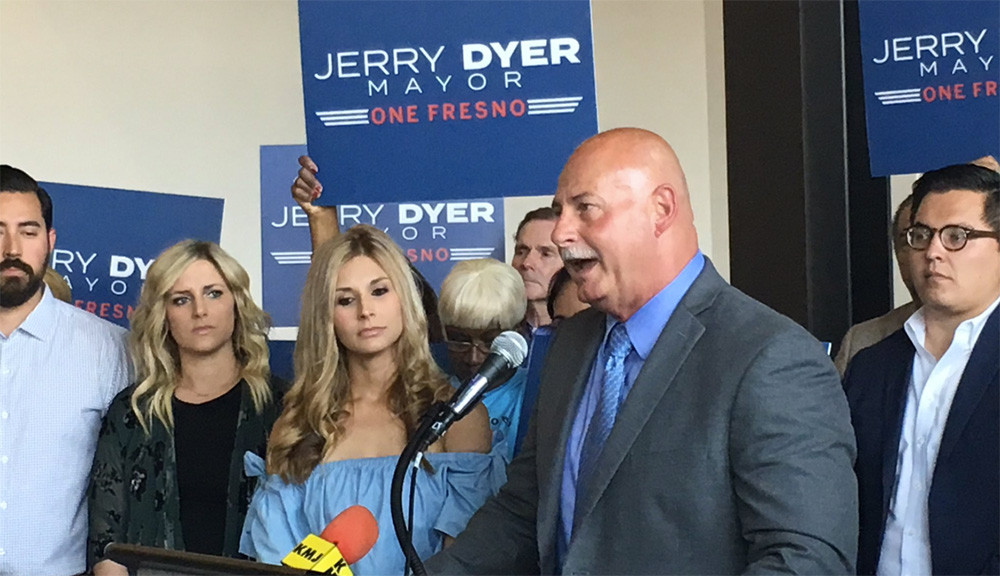 Jerry Dyer, who often has cut a larger-than-life figure in 18 years as Fresno’s police chief, is aiming for an even bigger stage as the city’s next mayor.

“The only way we can accomplish this is if we all come together,” Dyer said. “There is no north Fresno way or south Fresno way, there is only one Fresno way, and that’s what we’re going to do.”

The law enforcement veteran, who turned 60 earlier this month, immediately becomes a front-runner in a contest that was turned on its head nine days ago when Mayor Lee Brand announced he would not run for a second term.

Jerry Dyer on his announcement running for mayor and @LindseyGrahamSC pic.twitter.com/SgBlmDwkze

Dyer, who months ago had set in motion plans to retire as police chief, said he was looking forward to traveling and spending more time with this family. But when it became clear that Brand was going to step aside, those plans changed. Dyer said he is committed to spending two terms in City Hall.

“I think we’ve spent too much time talking about the potential of Fresno. I think it’s time we’ve achieved it,” he said.

Dyer’s announcement was not a surprise. His candidacy was bandied about for months in political circles, and on the day Brand stepped aside, Dyer said he was “strongly considering” going for City Hall’s top job.

“I just wanted to say I tried to talk Jerry out of this,” joked Autry, who introduced Dyer. “After eight years in the job, if he had hair it would look like this,” he added, pointing to his white thatch atop his head.

Autry expressed his support for Dyer, saying the chief “has a deep love for this city, a love unlike anything I’ve ever seen.” Dyer’s staff moved his mayoral campaign announcement from in front of Manchester Center to indoors. Protesters, about a dozen strong and chanting “No Mayor Dyer” and “Dyer is a liar,” had gathered outside.

Mall general manager Moe Bagunu, as well as mall security, attempted to get the group to leave, saying the space was private property. The protesters responded by telling security guards to call 911. Though police officer were already present, no one was arrested.

When the event was moved indoors at the entrance of the mall, the protesting group was not allowed in. They could still be heard throughout Dyer’s announcement.

Shannon Kurtz is a veteran of anti-police gatherings.

“We’re trying to make our voices heard. It’s very difficult in this environment for anyone to have an actual say. Sometimes we have to take it to escalated measures,” Kurtz said after the event.

Kurtz said this is one of the most divided times in American political history, a point Autry brought up in his introduction of Dyer.

Her biggest issue with Dyer revolved around Deputy Chief Keith Foster arrest in 2015 and subsequent conviction for drug trafficking.

“This means Dyer was either incompetent because he didn’t notice this, or he was corrupt and in on it,” Kurtz said.

Kurtz said she would support an opposition candidate, if one enters the race. She has objections to Fresno County Deputy District Attorney Andrew Janz — who announced his candidacy earlier this month — because he also is in law enforcement.

Janz Welcomes Dyer to the Race

The announcement was originally scheduled to be held outside the mall’s south entrance, but was moved inside after a group of vocal protesters gathered outside.

On May 20, Brand went on Ray Appleton’s KMJ radio show to announce he wouldn’t run to keep a job he earned in 2016 with an election victory over Henry R. Perea. “It’s time I move on,” said Brand, 70.

In an exclusive GV Wire poll conducted in April, Dyer was preferred in a three-way race with Janz and Brand. Janz, however, was a close second.

In a statement, Janz said he welcomed Dyer’s candidacy and looked forward to debating the issues.

“Our democracy works best when two competing visions are brought forth, weighed, and vigorously vetted by the voters,” Janz said. “Over the next nine months, Fresnans will have an opportunity to decide who is best positioned to unite our community and bring about real change.”

“The fifth-largest city in California needs a full-time chief of police,” Arias said in a statement. “Especially given the pending release of personnel records, audit of the police department, and potential investigations related to mayoral campaigns.” He did not elaborate.

Dyer knows his long time in the spotlight as Fresno’s top cop will open him up to criticism and scrutiny.

“Politics is a dirty sport,” he said last week. “I can tell you right now, should I chose to run for mayor, that’s not what I’m going to resort to in my campaign. I would resort to the issues.”

As Craft Beer Market Grows, so Do Wild Flavors