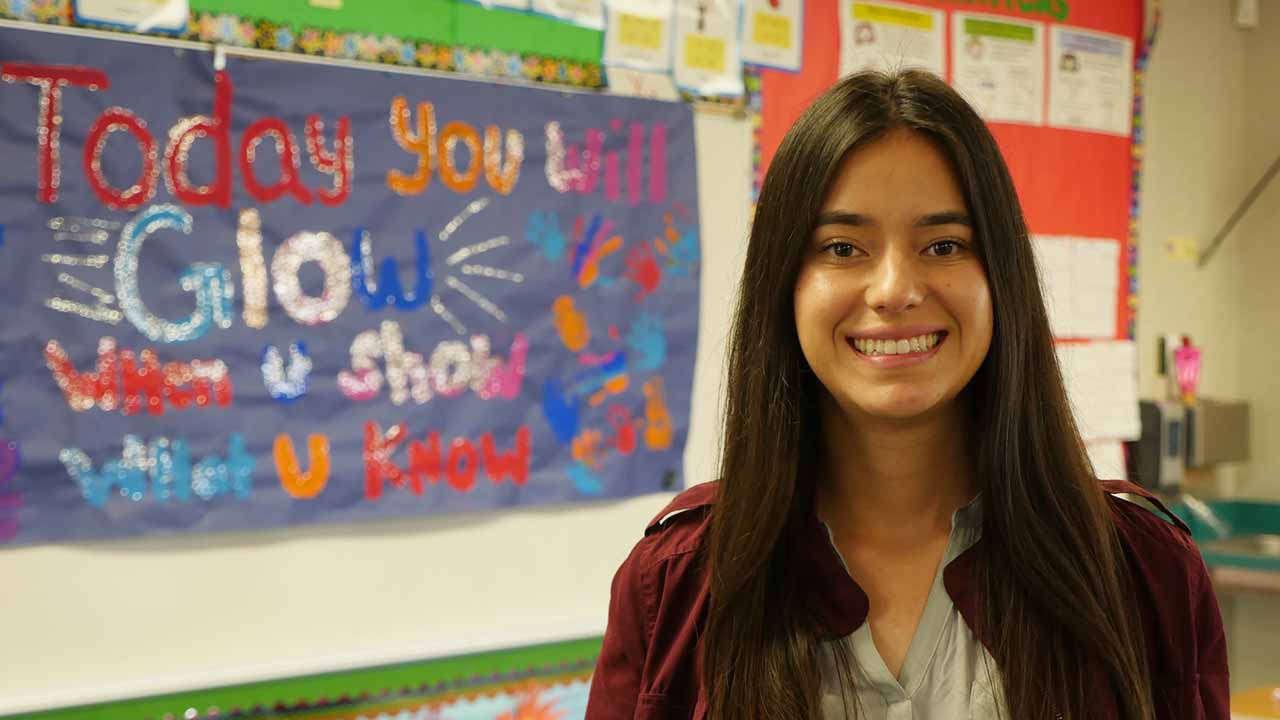 Kaylee Gutierrez is among the 19.3% of students who enter Fresno State as freshmen and get their diplomas four years later.

But she did something else that had university officials jogging their memories.

Gutierrez earned a multiple-subject teaching credential while posting a 4.0 grade-point average in those four years. Best anyone at Fresno State can recall, she may be the first in school history to pull off that feat.

That accomplishment alone is worth writing about, but there’s much more to the story of this year’s dean’s medalist in the Kremen School of Education and Human Development.

Teaching is Her Passion

So why was she in such a hurry?

“I’ve always wanted to be a teacher since I was young,” Gutierrez says. “And when I got older, I started to realize even more the importance of education and having high-quality, passionate educators, especially in the Valley.”

Her father, Miguel, attests to Kaylee’s love for teaching and working with children.

“Kaylee always played teacher when she was little. It has been her dream and passion,” Miguel says. “She was so determined to become an educator that she never let anyone discourage her from obtaining her teaching credential.

“I clearly remember when someone told her, ‘You are too smart to be a teacher, you should choose a different profession rather than just being a teacher.’ Her answer was, ‘Students need committed, smart teachers to empower them as future leaders.’ ”

A passion for education and excellence runs in the Gutierrez family. Miguel is vice principal at Ewing Elementary. Her older sister, Leilani, earned a UC Regent’s and Chancellorship’s scholarship to Berkeley. Leilani will begin medical school at UCLA on a full-ride scholarship this fall.

“He is very creative and enthusiastic,” Gutierrez says of her dad. “He’s really shown me the importance of connecting with the students and their families as a whole and building strong, healthy relationships.”

She describes her relationship with her sister as “a healthy competition” in which they help each other out.

How Gutierrez Pulled It Off

The other big question: How did Gutierrez pull off graduating, getting a teaching credential, earning all A’s, landing a teaching job, and everything else in just four years?

Well, for starters, being in a hurry is her normal state. She rushed into this world as a premature baby, weighing just 4 pounds.

“We were told there probably would be learning delays, and we ready for that,” her father says. “But we never saw any.”

Gutierrez swam for coach Rick Klatt and the Fresno Dolphins from age 5 until she graduated from Central High School. At Central, she was on the swim and water polo teams while taking every Advanced Placement class humanly possible. She also helped start the school’s Interact community service club.

Thanks to the AP courses, she earned 45 college credits at Central and thus was able to complete her bachelor’s degree in two-and-a-half years. That freed her for the year of student teaching required for the teaching credential.

Smart planning and being a Smittcamp Family Honors College scholar helped, too. In addition to financial aid, Smittcamp students receive priority registration for classes. Gutierrez lined up her classes back-to-back, creating extra time for studying and volunteering with Camp Kesem, a week-long free camp for children affected by a parent’s cancer.

“I didn’t really view it as just the challenge of how much I could fit into four years,” Gutierrez says. “I viewed it more as an opportunity to be able to go into teaching sooner.

“But just to have only 24 hours in the day was a challenge.”

Don’t expect her to slow down and exhale. In August, she starts teaching fourth-graders at Lincoln Elementary. That’s great news for Fresno Unified. Landing Gutierrez is like an NFL team having the first overall draft pick.

“It’s going to be a year of a lot of growth,” she says. “I’m nervous about it, but more so excited to finally have my own classroom.”

Watch: The Making of ‘The Tree Tales’

Why UCLA Is More Important Than Cal-Berkeley