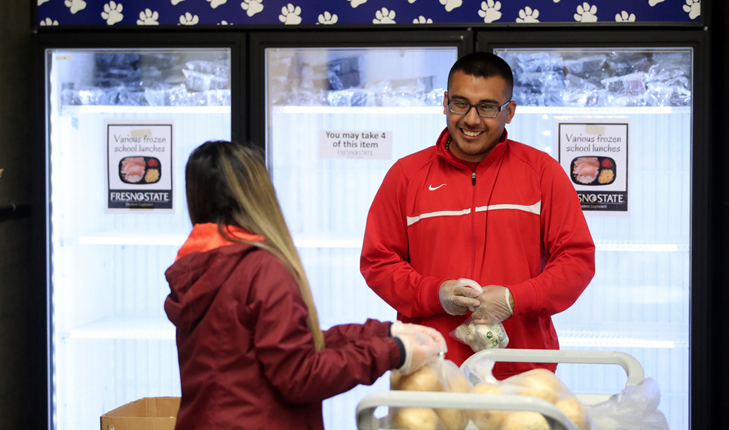 Fresno State’s student cupboard has helped students like ToniMarie Munoz focus more on school and less on wondering where their next meal will come from.

The free food and hygiene pantry has also kept Munoz from working a third job to buy food.

“We couldn’t support the student cupboard and run it without our matching partners as well as the community and the donations that come in on a regular basis.” — Alicia Nelson, director of student wellness services, who oversees the student cupboard

“The student cupboard has been very helpful during my time here in college,” Munoz said.

So much so that Munoz decided to donate to March Match Up, Fresno State’s annual, month-long fundraising campaign to support the cupboard.

The event runs from March 1 through March 31. All proceeds make up the majority of the cupboard’s annual budget, said Alicia Nelson, the director of student wellness services, who oversees the cupboard.

The goal this year is to raise $100,000 from community donations. Moss Adams LLP, Granville Homes and an anonymous donor have committed to match contributions up to that amount. (Darius Assemi, President of Granville Homes, is the publisher of GV Wire.)

Macy’s, Dutch Bros. Coffee, Pieology, and Buffalo Wild Wings are among several organizations also contributing to the cause.

“We couldn’t support the student cupboard and run it without our matching partners as well as the community and the donations that come in on a regular basis,” Nelson said.

Final results for this year’s March Match Up will be announced at a special event in early April.

Putting An End To Student Hunger

March Match Up also aims to raise awareness about student hunger, which is a significant barrier for college students, Nelson said.

“This is a project that is dear to President Castro and I,” said Mary Castro, who is spearheading the campaign. “We believe in the hardworking, talented students at Fresno State. We also understand from personal experience that it is empowering when others invest in you by making it possible for you to focus on reaching your goals.”

As of 2017, over 43 percent of students who participated in a survey said they were food insecure, according to a study done by the California State University chancellor’s office.

According to the Centers for Disease Control and Prevention, when a student is hungry, it is very difficult to think and retain information.

Chris Morse said that is the reason Moss Adams LLP has supported March Match Up every year since it began in 2016. 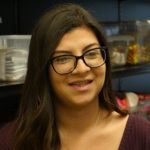 “I want to make (the student cupboard) known to more students because it has helped me so much.” — ToniMarie Munoz, student donor of March Match Up

“We realized the food insecurity issue on campus is not something that we think is appropriate for our community,” said Morse, a Fresno State alumnus and partner in charge of the Moss Adams Fresno offices. “We need to make sure students have basic needs so that they can go to school and stay focused on studying and not worry about where their next meal is coming from.”

Student usage of the cupboard has grown considerably. Since its inception in 2014, visits increased from 200 a month to over 6,000 visits today.

“Being able to support students with their basic needs and food will definitely help them to graduate on time and become our future leaders here in the Valley,” Nelson said.

Munoz hopes by donating, more students will become familiar with the program and utilize its services.

“I want to make (the student cupboard) known to more students because it has helped me so much,” said Munoz, who graduates in May.

Those also wanting to help the cupboard can make a donation to March Match Up here.

Learn More About The Student Cupboard

Did Reclamation Do Right by Westlands With 55% Allocation?