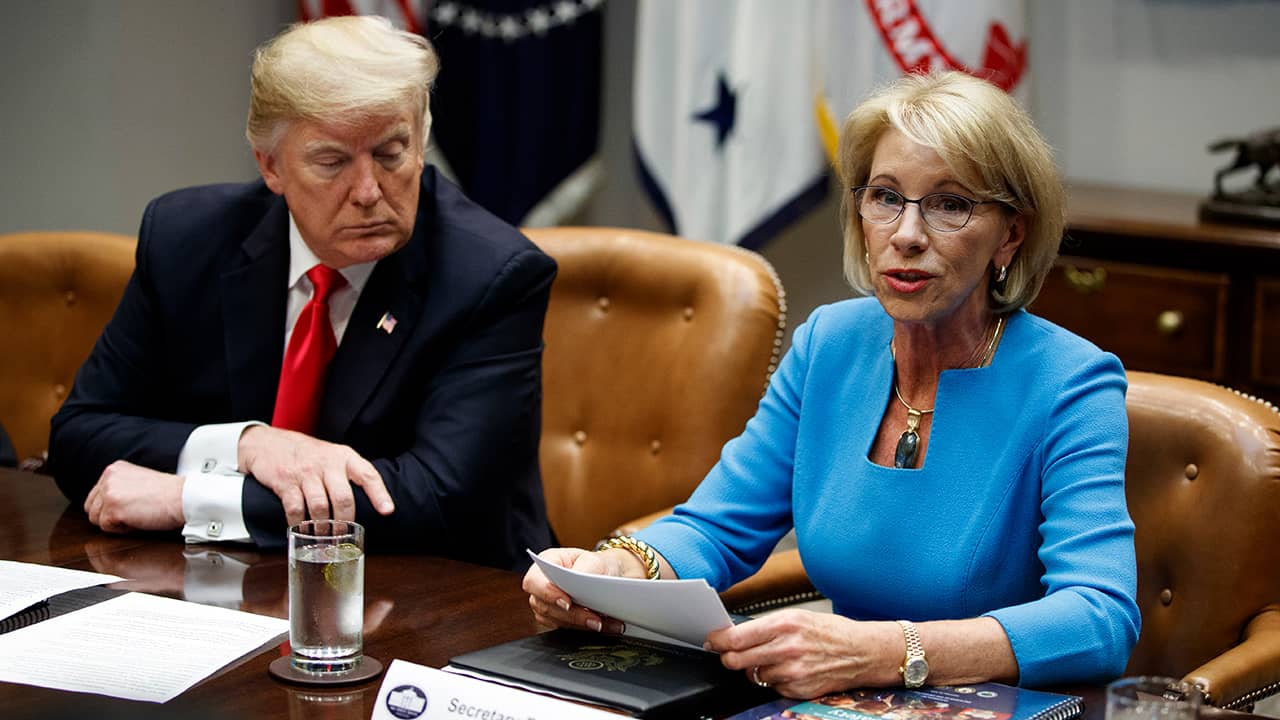 The Trump administration on Tuesday moved to roll back an Obama-era policy that was meant to curb racial disparities in school discipline but that critics say left schools afraid to take action against potentially dangerous students.

A Better Balance Between Discipline and School Safety

Trump praised the report at a White House event Tuesday, saying “nothing is more important than protecting our nation’s children.”
On the question of whether schools should arm staff members, the panel said it should be left to states and schools to decide, but DeVos said schools should “seriously consider” the option. The report highlights districts that have armed staff members, and it steers schools to federal funding that can be used for firearm training.
Among the biggest proposals is a rollback of 2014 guidance that urges schools not to suspend, expel or report students to police except in the most extreme cases. Instead, the guidance calls for a variety of “restorative justice” remedies that don’t remove students from the classroom.
President Barack Obama’s administration issued the guidance after finding that black students were more than three times as likely as their white peers to be suspended or expelled. The directive warns that schools suspected of discrimination — even if it is unintentional — can face investigations and risk losing federal funding.
But the policy came under scrutiny following the Parkland shooting, with some conservatives suggesting it discouraged school officials from reporting the shooter’s past behavioral problems to police. Florida Republican Sen. Marco Rubio, one of the most vocal critics, urged DeVos to find a better balance between discipline and school safety.

In its report, the commission says the policy was well-intentioned but “may have paradoxically contributed to making schools less safe.” It calls for a rollback, saying disciplinary decisions should be left to school officials. It said the Justice Department should continue investigating intentional discrimination but not the unintentional cases that are barred under the 2014 policy. Scarlett Lewis holds up a photo of her son Jesse Lewis, who was killed in the Sandy Hook school shooting, during a meeting with President Donald Trump on the Federal Commission on School Safety report, in the Roosevelt Room of the White House, Tuesday, Dec. 18, 2018, in Washington. (AP Photo/Evan Vucci)

“This is the most comprehensive report done after a school shooting ever done by an administration, that is going to affect the quality of life of all students and teachers throughout this country,” Pollack said.
But some critics said the report will do little to improve school safety. The National Association of School Psychologists said the report “largely reiterates already well-known and evidence-based efforts.” The group said the report is short on specifics and fails to provide federal funding for its proposals, which many schools can’t afford.
While the report doesn’t explicitly encourage schools to arm staff members, it says they “may consider” the option if their states allow it. And while DeVos has previously said she has no plans to let schools use federal education funding to arm their employees, the panel noted that certain Justice Department grants can be used on firearm training.
The nation’s two major teachers unions attacked the report, saying it should have focused on gun control rather than arming teachers, which both unions oppose.
“We do not need more guns in schools,” said Lily Eskelsen Garcia, president of the National Education Association. “It is shameful that the Trump administration is using the real risk of gun violence in our schools to strip vulnerable students of their civil rights, while doing nothing to keep all our students safe.”
On gun regulation, the commission’s only suggested change was a call for more states to adopt laws allowing “extreme risk protection orders,” or court orders that temporarily restrict access to firearms for people who are found to pose risks to themselves or others.

The group studied whether states should raise the minimum age to buy guns, which is often 18 for rifles and 21 for handguns. Some states have increased the minimum age to 21 for all guns, including Florida, which made the move following the Parkland shooting. It joined others including Hawaii and Illinois.