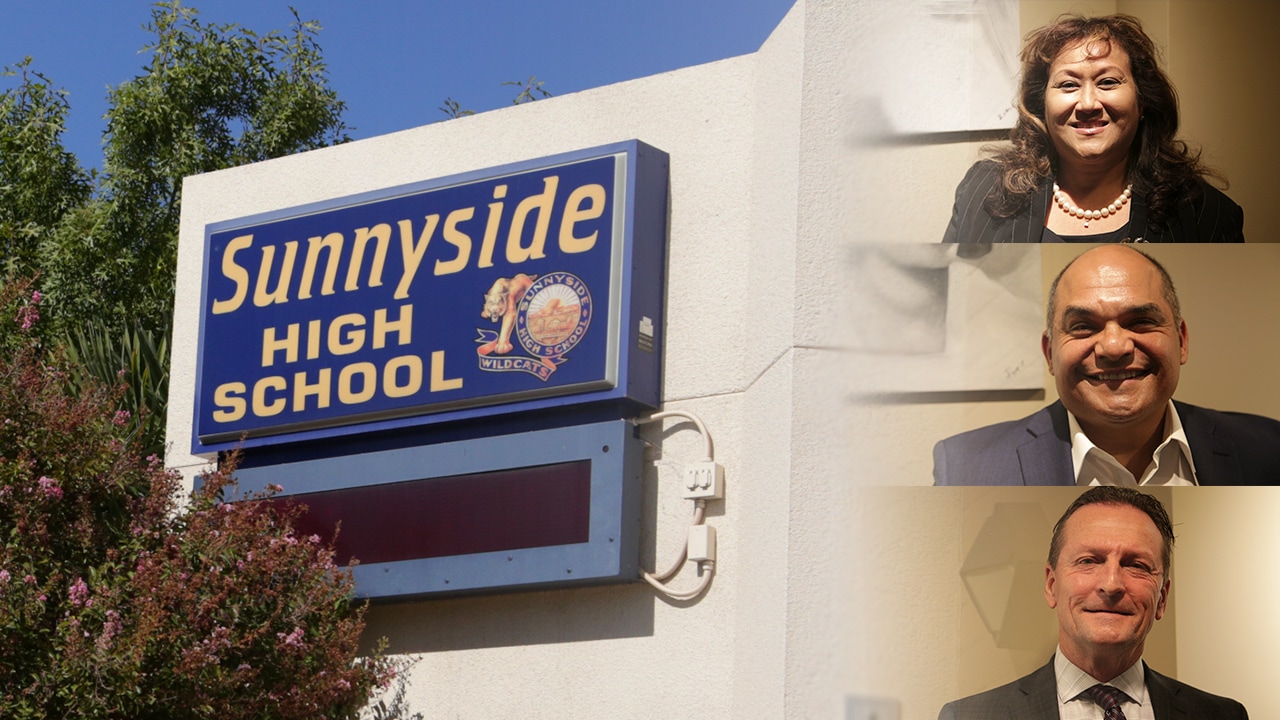 Is Fresno Unified too big and too stuck in its ways to deliver the upgraded quality of education that many of its students need?
Mark Ratchford, a candidate for the Sunnyside High School area trustee seat, says that he wants the district split in half. He wants more charter schools, too.
“It is just too big, it is too much to handle,” Ratchford said. “We’ve gotten so big that we’ve lost control of our $1 billion-a-year budget.”
Ratchford, a small businessman, and teacher Karl Diaz are challenging incumbent Valerie Davis, who has been on the board for 14 years.
Candidate Mark Ratchford says the Fresno Unified School District is too big and should be split up.

The idea of splitting up the district isn’t new. It has been proposed and studied previously. Some of the challenges include duplicating all of the district’s services — including transporting and feeding students — and ensuring that the new districts are racially balanced.
Davis says implementing such an idea wouldn’t work in “a district this big.”
“That wouldn’t make any sense,” Davis said. “We would just be reproducing and doubling our efforts throughout the entire district, costing taxpayers more money and more resources.”
Diaz doesn’t think Ratchford’s idea makes sense either.
“That is not a really good idea because then you have different bureaucracies come up and it takes a lot more resources away from the students,” Diaz said.

Ratchford said establishing more charter schools in Fresno Unified would also be beneficial.
“Kids who go to those schools, the parents tend to be more involved, test scores are higher, the students are performing better, and they want to go to school, they want to be there,” said Ratchford, adding that he’s been endorsed by charter schools.
He added that adding more charter schools will improve student success and prepare them for life after high school.
“In Fresno Unified, 17 to 20 percent of students that graduate from high school are at grade level, which means 80 percent cannot read and write properly or do basic math,” he said. “That is just wrong what they are doing to kids, they are setting them up for failure and frustration.”

Davis said she is not in favor of starting up more charter schools in Fresno Unified.
“We don’t find a lot of success with all of them all of the time,” Davis said.
With charter schools, Davis noted that teachers wouldn’t have a union.
“There’s a different accountability model for charter schools,” Davis said.
Diaz said the district doesn’t need more charter schools and believes Ratchford is looking out for special interests instead of students.
“I think he represents for-profit charters and they seem to be the ones who he’s getting a lot of his support from financially,” Diaz said. “We need to focus on the kids, not on private interests.”
Interviews of the candidates suggest that improving academic success and expanding classroom offerings are among the other top issues.

Davis was born and raised in Fresno with her four sisters and brother, and she graduated from Bullard High School and Fresno State.


“We are on a good path and we need to keep forward progress.” — Valerie Davis, Area 3 incumbent
Prior to her elected seat as a trustee, Davis worked for Fresno Unified since she was 18 years old.
Currently, she is dedicating all of her time to the board.
Davis, who has served for 14 years, said she is running for another term because “there’s still a lot of work to do.”
“We are on a good path and we need to keep forward progress,” Davis said. “We can’t let distractions outside of student achievement deter us from the work that we need to do.”
Student achievement is one of the biggest issues in the district, said Davis, who is endorsed by the California Employees Association and Fresno Unified’s classified staff.
Fresno Unified has around 74,000 students, 30 percent of whom are English-Language Learners. The district’s African American students, which make up 7 percent of the student population, score lower than ELL students on standardized tests.
“We started some new initiatives, started some new things just this summer, and it is paying off,” Davis said.
Every student having access to a computer is another goal Davis hopes to accomplish to help all students have an equal opportunity to become successful.
“Our kids don’t have access to a computer other than when they are in school, so we need to see that they have everything they need to succeed,” Davis said.
Another way Davis plans to improve academic success for students is having the district build more facilities to keep classroom sizes at a minimum.
“We need smaller classrooms, we need more classrooms and we need more teachers,” Davis said. “Statewide, there is a disparity of teachers so we need to boost that up and get the best and finest teachers in front of our kids.”
Working on these issues, Davis said, will increase the district’s graduation rate and the number of students who are college and career ready.
“When I started on the board 14 years ago, our graduation rate was 63 percent,” Davis said. “Last year, it was almost 85 percent. I would like to see 100 percent.”

Diaz was born and raised in Fresno with his sister and three brothers.


“The incumbent has been in place for 14 years and no real change has happened.” — Karl Diaz, candidate for Area 3 trustee
He graduated from Roosevelt High School, Fresno City College, and Fresno State, and obtained his teaching credential from National University. He teaches independent study courses at Madera County Superintendent of Schools.
Diaz said he is running because he wants to see positive change in Fresno Unified, something he hasn’t seen in a long time.
“I see the needs and it hasn’t changed much,” Diaz said. “The incumbent has been in place for 14 years and no real change has happened.”
One change Diaz wants is better preparing students academically, especially in elementary school, so they can handle the rigors of college.
“When you have a kid who is struggling with reading in the second or third grade, they shut down and they hate it, and they are the ones who act out in class,” Diaz said. “The key is early intervention so we can make sure that all kids are successful because all kids can learn.”
Diaz also wants to increase school safety for students on and off campus.
“Most people think student safety is school shootings and that kind of thing, but student safety is also getting beat down, and we need to really be aware of that and have resources when they are at school and when they are walking home,” Diaz said.
Modernizing classrooms and teaching to 21st century standards is another change Diaz believes will improve student success.
“Schools are still being structured like they were 100 years ago,” Diaz said. “We need to have schools within schools that offer technology with lower class sizes and that can encompass things they find interesting in their learning.”
Ultimately, Diaz said he envisions more schools in Fresno Unified providing educational opportunities for all students.
“I would like to see more specialized learning that is career driven and prepares them for careers and prepares them also for the need to become lifelong learners through technology,” Diaz said.

Ratchford was born in Pasadena and raised with a sister. He graduated from Boise High School in Boise, Idaho, and attended Fresno City College. He works as a design engineer for Hague Quality Water Central California, Inc., in Fresno.
Having been in the water conditioning business for 25 years, Ratchford said he possesses an ability the incumbent doesn’t: making business decisions. Such a quality, Ratchford said, qualifies him to become the next board member.
“You need to make business decisions, not what your heart tells you, but you have to use your head, and I’ve never had an issue doing that,” Ratchford said.


“In Fresno Unified, 17 to 20 percent of students that graduate from high school are at grade level, which means 80 percent cannot read and write properly or do basic math. That is just wrong what they are doing to kids, they are setting them up for failure and frustration.” — Mark Ratchford, candidate for Area 3 trustee
As far as what could make Fresno Unified better, Ratchford believes modeling its schools after Clovis schools is a good start.
“Everybody wants their kids to go to Clovis Unified,” Ratchford said. “They’ve got better-looking schools, they’ve got better-performing students, they’ve got better results, and I intend to get some information from Clovis Unified to see how they run their schools because obviously they are doing something right.”
Keeping local control within the district is also critical for the district to move forward, Ratchford said.
“There’s a lot of control from Washington, D.C., and Sacramento,” Ratchford said. “My idea of government is that it needs to be done locally because it is a lot easier.”

(Interactive map showing the schools within the boundaries of FUSD Area 3.)