OAKLAND — The Los Angeles Rams and Oakland Raiders spent most of the lead-up to the season in the same predicament, with their Defensive Players of the Year holding out while seeking new contracts.

When the teams open the season against each other Monday night in Oakland, that will have changed. The Rams will have last year’s winner of the league’s top defensive award on the field anchoring the middle in Aaron Donald. The Raiders will be without 2016 winner Khalil Mack, who was traded to Chicago.

The Raiders dealt Mack for a package including two first-round draft picks a day after Donald signed a six-year, $135 million deal, with $87 million guaranteed. Oakland was unwilling to pay that price for Mack, forcing defensive coordinator Paul Guenther to shelve plans he made after getting hired on how to use Mack, and proceed the way he approached training camp with the rest of the overhauled defense.

“I think I saw the guy in a restaurant in March one time,” Guenther said. “My kids pointed it out to me, ‘Hey, its Khalil Mack. He’s got the new Jordans on.’ You know, I wouldn’t know. With as many new players we brought in, new coaching staff we just kind of got use to him not being here and operating with what we got, so we are going to move along that way.”

Trying to Improve Their Pass Rush

The Raiders spent much of the offseason trying to improve their pass rush by moving Bruce Irvin to a full-time defensive end position, and drafting P.J. Hall, Arden Key and Maurice Hurst. That group helped generate 12 sacks in the preseason and will have plenty of pressure starting Monday night to fill Mack’s void.

“It’s an opportunity for me and the rest of the guys on the D-line. That’s just another opportunity. Khalil Mack is gone. We can’t dwell on it. We have to move forward and somebody has to step up in his spot.” — Arden Key, defensive end for the Oakland Raiders

“It’s an opportunity for me and the rest of the guys on the D-line,” Key said. “That’s just another opportunity. Khalil Mack is gone. We can’t dwell on it. We have to move forward and somebody has to step up in his spot.”

The Rams said they weren’t exactly upset to see Mack traded, considering he has averaged more than 12 sacks and 60 quarterback pressures over the last three seasons. But they noted they still have to face Mack in Week 14 and that the Raiders’ other rushers present enough of a challenge this week.

“He’s a great player, and he’s not going to be on the team we’re playing this week, but they’ve got plenty of good players, and they’ve got a great defense and a great team that we’re preparing for,” quarterback Jared Goff said. “We’re not thinking very much about Khalil right now.”

The Raiders have plenty to worry about on Los Angeles’ defense now that Donald is back to team with three former All-Pros added this offseason: defensive tackle Ndamukong Suh, cornerbacks Marcus Peters and Aqib Talib.

The new-look lineup gives coordinator Wade Phillips one of the game’s best pair of cornerbacks in Peters and Talib, as well as interior rushers in Donald and Suh. 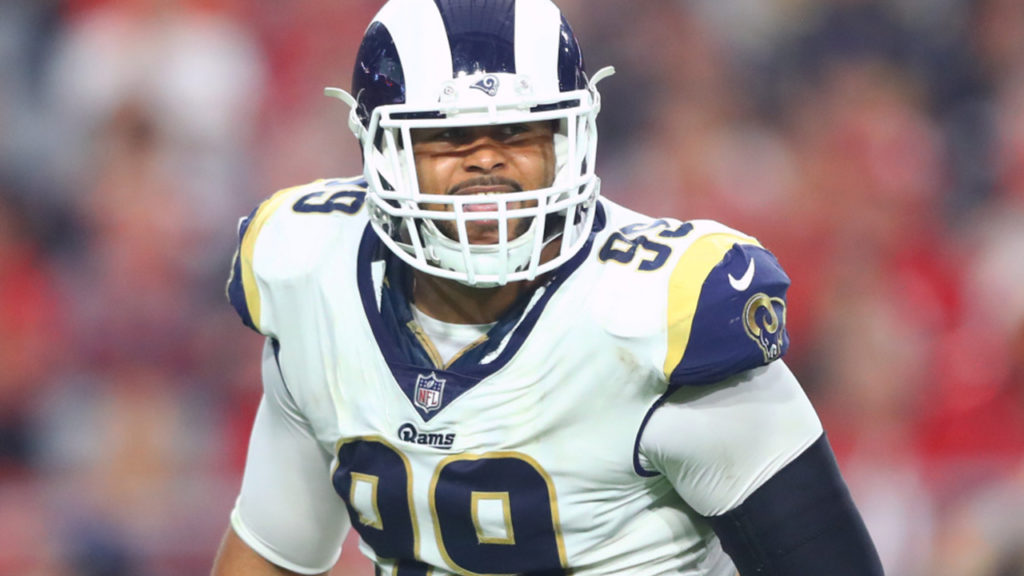 The Rams will have last year’s winner of the league’s top defensive award on the field anchoring the middle in Aaron Donald. (Photo: USA Today)

What to Expect With Peters and Talib

The Raiders have a good idea what to expect with Peters and Talib having spent the past few years in the AFC West; Oakland playing against Suh in Miami last year; and Phillips serving as defensive coordinator in Denver in 2015-16 when he faced the Raiders four times overall.

“It looks good right now, but it’s about playing together as a unit and doing a great job against what we know is going to be an excellent challenge with a great offense on Monday night.” — Coach Sean McVay

“They’re all great players,” quarterback Derek Carr said. “They have a great team, great defense. Great challenge they present us. Then (defensive coordinator) coach Phillips calling it. I’ve gone against him a number of times. He does his stuff, man, and he’s really good at it. It’s going to be a good challenge for us. I can sit here and talk good things about all those guys. They know how I feel about them, they’re great players.”

The Rams have spent the past week incorporating Donald into the mix after he held out all offseason and training camp. They have experience doing it from last year, when he didn’t report until one day before the season opener and missed the first game.

He’s had more than a week of practice and should be ready for the opener for what could be the most star-packed defense in the league.

“We haven’t played in any games or any meaningful snaps, so we’re still figuring out how to come together as a defense,” coach Sean McVay said. “You feel good about those two players and some of the other guys that will play with them up front. It looks good right now, but it’s about playing together as a unit and doing a great job against what we know is going to be an excellent challenge with a great offense on Monday night.”