Eyewitness to 9/11 Destruction Will Speak at Memorial Event 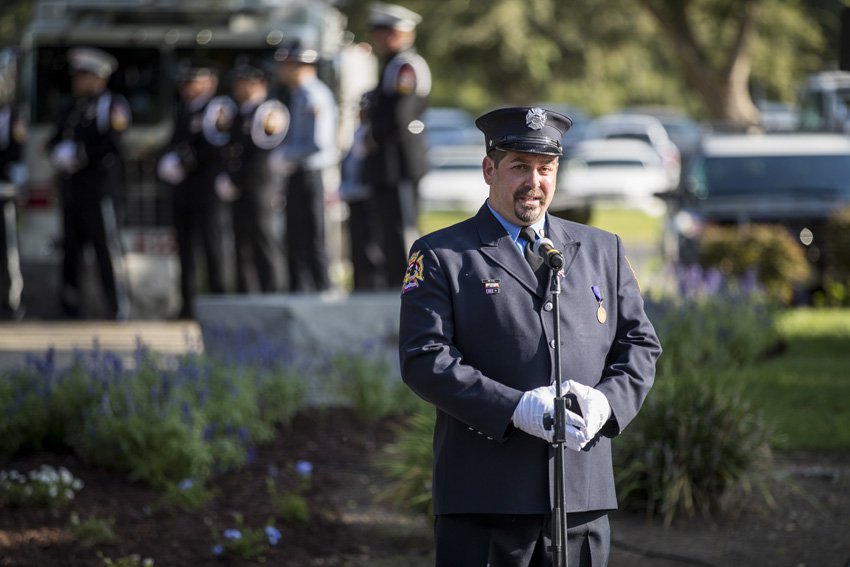 Andy Isolano was getting ready to go home after putting in a full day’s work as a firefighter in New York City when the first plane crashed into the World Trade Center on Sept. 11, 2001.


“That day changed the face of how we live.” — Andy Isolano, former New York City firefighter
Firefighters working the day shift were dispatched to the crash site, Isolano said.
Isolano said he and his colleagues witnessed the second plane crash into the South tower from the fire station’s roof.  Soon thereafter, Isolano and his crew jumped on a spare fire engine to help.

After the destruction ended, Isolano and other survivors spent the next several months searching for bodies and trying to save those who were still breathing.
“Unfortunately, we weren’t able to, but we did what we could,” said Isolano, adding that he lost 13 close friends that day. “A lot of what I loved was gone.”

Needing a new start in life, Isolano decided to relocate to Clovis where he’s lived for 14 years.
Part of what drew Isolano to Clovis was the Sept. 11 memorial ceremony Pelco held there in December 2001.
Isolano said it was the first time since the attacks that “anything good had happened.”
“They treated us like we were rock stars,” Isolano said. “People wanted to do whatever they could to help. It was incredible. It saved my life.”

Isolano will be the guest speaker at this year’s memorial ceremony. His goal is to make sure everyone remembers and understands everything that happened on 9/11.
(The event in Clovis was one of many in the greater Fresno area Tuesday. Scroll to the bottom of this story to check out your options for attending.)


“I think the intent is to have everyone always remember these attacks and how many of our uniform service people put their lives on the line and actually gave their lives that day.” — Pelco CEO David McDonald
“That day changed the face of how we live,” Isolano said.
To help people remember 9/11, the theme of this year’s memorial ceremony is “We must never forget Patriot Day.” The ceremony will feature a combined command military honor guard, Marine Rifle Team, pipes and drum team, and representatives of local public safety agencies.
The ceremony will include the lowering of the California Memorial flag to half-staff by a military flag detail, a wreath procession with motor escort and placement of the wreath at the memorial. Buglers will play “Taps” and the National Anthem.
The ceremony will also include periods of solemn silence.

Former Pelco CEO David McDonald will be the honored guest at the ceremony and will receive a ceremonial flag for founding the event.
McDonald said he started the ceremony to help ease the pain and struggle many have endured.
“I think the intent is to have everyone always remember these attacks and how many of our uniform service people put their lives on the line and actually gave their lives that day,” McDonald said. “It was 403 to be exact.”

Fresno City College will commemorate the 17th anniversary of 9/11 with a 9/11 Memorial Wreath March.
The public is welcome to attend the march, which starts at 9 a.m. Tuesday at the college.
The memorial march will begin near the Main Foundation Area in the center of the college and proceeds to the area adjacent to the Veterans Peace Memorial near the Bookstore.
Bagpipes will be played as FCC Fire and Police academy cadets carry and escort the wreath through the march. After the march, a memorial ceremony will open with Jacob McAfee, FCC Fire Academy Director, and an official welcome by College President Dr. Carole Goldsmith.
Michael Grahl, a police officer with State Center Community College District, will be the guest speaker.
Gral will describe his first-hand experience as a Marine while on duty at Camp Pendleton on Sept. 11, 2001, and the base’s response to the national tragedy. In the midst of his career after 9/11, Grahl encountered the immediate measures the nation took to conduct homeland security.
The ceremony will close with a moment of silence followed by “Echo Taps” played on the bugle. Guests are encouraged to stay and view the original 9/11 newspaper articles and additional displays near the wreath.

Fresno Fire Chief Kerri Donis will be the guest speaker at Clovis Community College’s 9/11 and wreath laying ceremony. The ceremony will run from noon to 12:30 p.m. near the school’s flagpole.

Duncan Polytechnical High School will also hold a 9/11 ceremony not only in memory of victims of 9/11, but to honor local veterans, police officers, and firefighters.

Central High School will hold a 9/11 observance starting at 10 a.m. tomorrow at the east campus, 3535 N. Cornelia Ave.
After a moment of silence is observed, several members of the U.S. military will dedicate an American flag to the high school. A couple of the school’s band students will play “Taps.”

McLane High School’s Art Venture Academy will display art recognizing the 9/11 attack on the Twin Towers tomorrow. The artwork will be on display from 8 a.m. to 3 p.m. for two weeks beginning Tuesday.
The art was created by students in 2002 and in 2011, the 10th anniversary of the attack. The art will be displayed in the hallways of the T Building, leading to teacher Marc Patterson’s classroom in T1.
Art pieces reflect student responses to the attack in mixed media, as well as portraits of victims and first responders. The display also includes student writing, poetry, haiku, and personal stories.
“This 9/11 art display is a wonderful example of engaging students in art and writing by having them reflect on relevant and significant events in their community and in their lives, Nelson said.

The Sept. 11 attacks were a series of four coordinated terrorist attacks by the Islamic terrorist group al-Qaeda against the United States on the morning of Tuesday, Sept. 11, 2001.
The attacks killed 2,996 people, injured over 6,000 others, and caused at least $10 billion in infrastructure and property damage. More people died of 9/11-related cancer and respiratory diseases in the months and years following the attacks.
Within an hour and 42 minutes, both 110-story towers collapsed.