TEHRAN, Iran — As Iranians awoke Tuesday to renewed U.S. sanctions that had been lifted by Tehran’s nuclear deal with world powers, the question on everyone’s mind remained: What happens now?

From deciphering President Donald Trump’s tweets on Iran — including one demanding “WORLD PEACE” — to trying to figure out how much their cratering currency is worth, Iranians on the streets appear divided on how to respond.

“Their sanctions are very effective, as you can see, the government should find a solution. They should first solve domestic problems because people are really drowning in poverty and misery.” — Mahmoud, former civil servant

The same goes for inside its theocratic government. President Hassan Rouhani, a relative moderate, has taken an increasingly confrontational line in recent weeks, applauded by the hard-liners who had long opposed him. Meanwhile, Rouhani seemed to suggest on live television the night before that direct talks with Trump could be possible — something of which North Korean Foreign Minister Ri Yong-hu, who visited Tehran on Tuesday, has personal experience.

Whether Iran should choose a Singapore-style photo-op with the American president who backed out of the nuclear deal or abandon the unraveling accord and increase its uranium enrichment remains a fiercely debated question. But everyone agrees something has to be done soon, as sporadic, leaderless protests across the country of 80 million people only add to the pressure.

German car and truck maker Daimler AG on Tuesday said it was suspending its “very limited” activities in Iran and shuttering a representative office. European companies had known since Trump’s decision in May that sanctions were coming back. Airbus at that time suspended plane deliveries to Iran; of 98 orders, only one A321 had been delivered, plus two A330s that were sold to a company that leased them to an Iranian customer.

“The situation is not good right now; nothing is clear. The economy is turning into a jungle.” — Ebrahim Gholamnejad, carpenter

As uncertainty over the Iran nuclear deal grew after Trump entered the White House, Iran’s already-anemic economy nosedived. The country’s monthly inflation rate has hit double digits again and the national unemployment rate is 12.5 percent. Among youth, it is even worse, with around 25 percent out of a job.

Iran’s currency, the rial, now trades over double its government-set rate to the U.S. dollar. Trying to stem the loss, the Iranian government five months ago shut down all private currency exchange shops, but the black market has thrived.

On Tuesday, however, new central bank chief Abdolnasser Hemmati allowed private currency exchanges to reopen. Shops welcomed customers, though some displayed no exchange rates late into the morning amid confusion over how much the troubled rial was truly worth.

Iranian authorities recently arrested 45 people, including the central bank’s deputy chief, as part of a crackdown on financial fraud, according to judiciary spokesman Gholamhossein Mohseni Ejehi.

On Tuesday, Iran’s state-controlled television aired a 30-minute documentary applauding the central bank’s new economic decisions. The hard-line Keyhan newspaper, which previously lampooned Rouhani, bore his picture on the front page with a large headline quoting him saying: “The way we can surpass all sanctions is to have unity.” 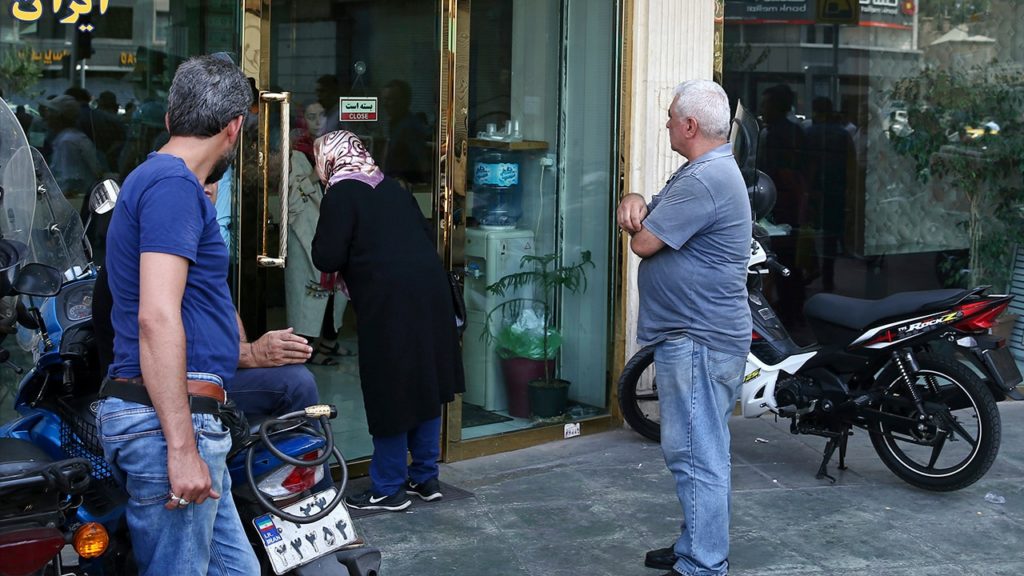 People wait in front of a closed money exchange shop for it to open, in downtown Tehran, Iran, Tuesday, Aug. 7, 2018. (AP Photo/Ebrahim Noroozi)

What Is Iran Going to Do Next?

But what to do next remains an open question. Iran continues to abide by the 2015 nuclear deal it struck with the Obama administration and other world powers, which limits its enrichment of uranium in exchange for the lifting of sanctions, and makes it impossible for Iran to quickly develop a nuclear weapon. Iran has always said its nuclear program is entirely peaceful.

In recent weeks, Iran has prominently displayed its centrifuges and threatened to resume enriching uranium at higher rates. Rouhani, whose administration struck the deal, also has taken a harder line himself, at one point renewing a long-standing Iranian threat to close off the Strait of Hormuz, through which a third of all oil traded by sea passes.

Trump for his part has ricocheted between threats and promises to speak with Iranian officials without preconditions, offering mixed messages to both the Iranian public and its government. That continued Tuesday, as he described American actions in a tweet as “the most biting sanctions ever imposed, and in November they ratchet up to yet another level.”

Division Among the People

Though Iranians already are angered by Trump putting their nation on his travel ban list, some say talks with the American president might be necessary. Others insist that Iran, which has weathered decades of previous sanctions, should stand its ground.

“I believe America cannot do a damn thing. It can’t do anything, because Iranians are backing each other.” — Farzaneh, housewife

Direct talks with the U.S. also would challenge the Islamic Republic leadership, which for nearly 40 years has encouraged flag-burning demonstrations against “the Great Satan.” On Tuesday, North Korean Foreign Minister Ri Yong-hu visited Tehran and met its leadership. It’s unclear what he discussed with them, though he was involved in Pyongyang’s Singapore talks with Trump.

For now though, Iranians say they can only wait for the next Trump tweet or their government’s decision on how to respond.

“People should just keep calm, because the other party wants to disrupt our peace,” said Gholamnejad, the carpenter. “America, who imposed the sanctions, wants to create chaos.”