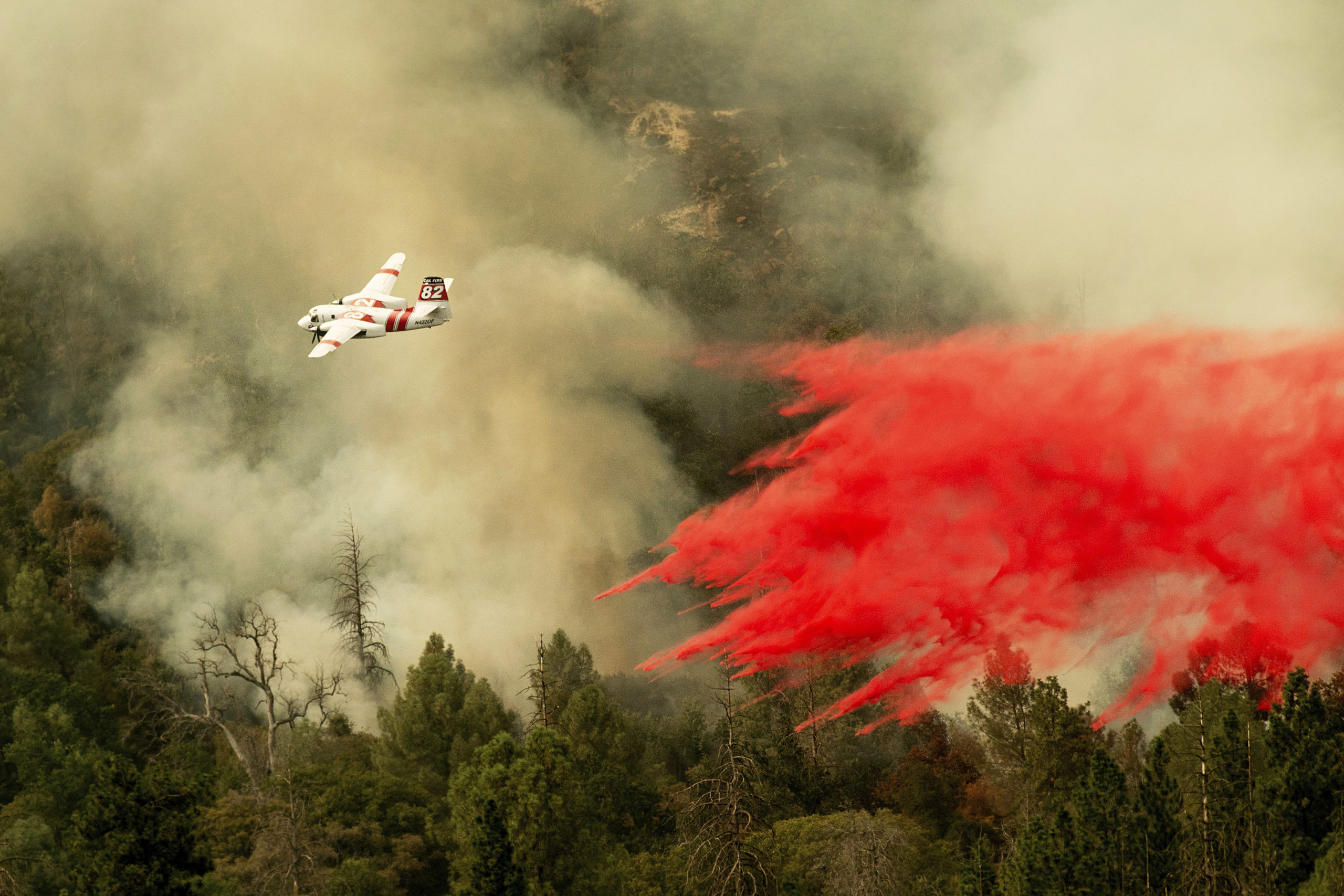 California Gov. Jerry Brown declared a state of emergency in Mariposa County on Thursday afternoon because of the deadly Ferguson Fire.
Earlier Thursday, the governor declared emergencies due to wildfires in Riverside and Shasta counties.
Firefighters worked through Wednesday night to expand and strengthen containment lines around the wildfire west of Yosemite National Park, officials said Thursday morning.
The fire grew by 1,723 acres overnight to a total of 43,299 acres as of 6 a.m. Thursday.
Authorities said that it is now 27% contained. 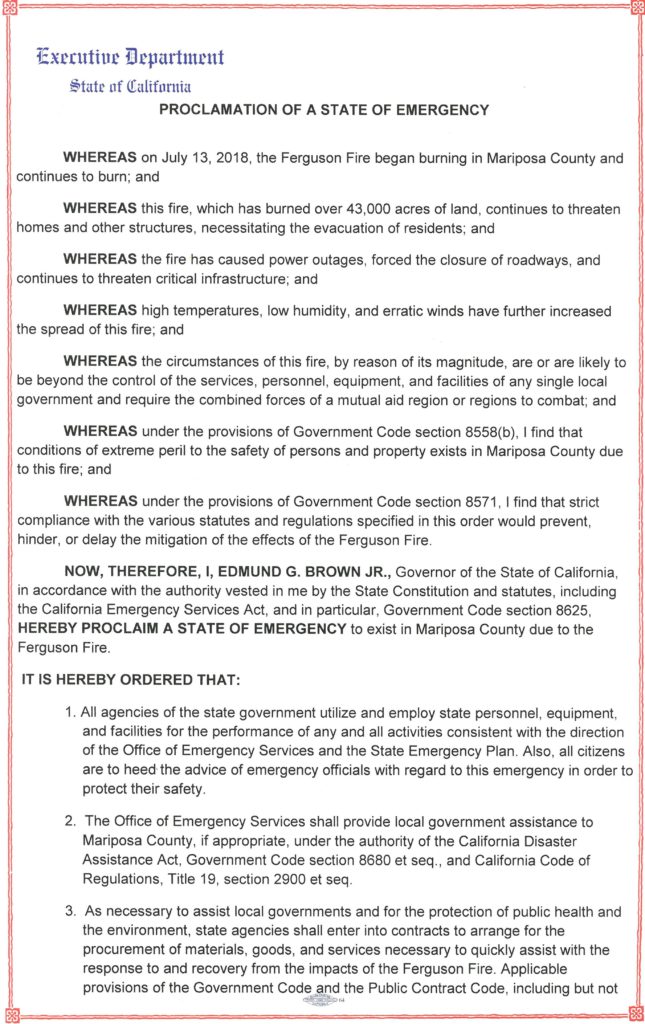 Representatives from the U.S. Forest Service, Cal Fire and the Mariposa County Sheriff’s Office will present an overview of the situation and containment efforts in Mariposa at 6 p.m. Thursday, July 26, at the Mariposa Fairgrounds, Sequoia Hall.
There will be a community meeting at 6 p.m. Friday, July 27, at Tenaya Elementary School in Groveland, as well.

Officials said Thursday morning that 3,686 personnel are fighting the wildfire. They are backed by 241 engines, 47 water tenders, 18 helicopters, 94 crews, and 63 dozers.
There has been one fatality and seven injuries. Bulldozer operator Braden Varney was killed July 14
One structure has been destroyed.

The few remaining campers in Yosemite Valley packed up their gear Wednesday.


“So, this is a new memory. I’ve never been evacuated before.” — Yosemite visitor Miguel Martinez
The sun rose in a smoke-filled sky over the scenic valley, which normally bustles with summer tourists but has largely emptied out after authorities reluctantly ordered the closure Tuesday.
Officials were quick to point out that Yosemite wasn’t under imminent danger from the fire. Authorities decided on the closure to allow crews to perform protective measures such as burning brush along roadways without having to deal with traffic in the park that welcomes 4 million visitors annually.
One couple checked out of the Majestic Yosemite Hotel, while a large extended family from Los Angeles on an annual trip to the national park prepared to leave the Upper Pines campground.
“Very disappointed,” Lisa Salgado said. “We look forward to this all year. This is the trip of our summer.”
The group arrived Monday and had planned to stay through Saturday. Instead, they packed tents and other gear into vehicles, hoping they could find another campground elsewhere.
“So, this is a new memory,” said Miguel Martinez. “I’ve never been evacuated before.”

Yosemite Valley will be closed until at least Sunday, along with a winding, mountainous, 20-mile stretch of California’s Highway 41 that leads into the area, park spokesman Scott Gediman said.
At least 1,000 campground and hotel bookings will be canceled — to say nothing of the impact on daily visitors, park workers and small businesses along the highway, Gediman said. Rangers went to campsites one at a time to inform visitors of the closures. Hotels guests got phone calls and notes on their doors.
“This is the prime visitor season, so this wasn’t an easy decision to make,” Gediman said. “This was purely for safety’s sake.”
The last time the 7.5-mile-long valley was closed because of fire was 1990, he said. 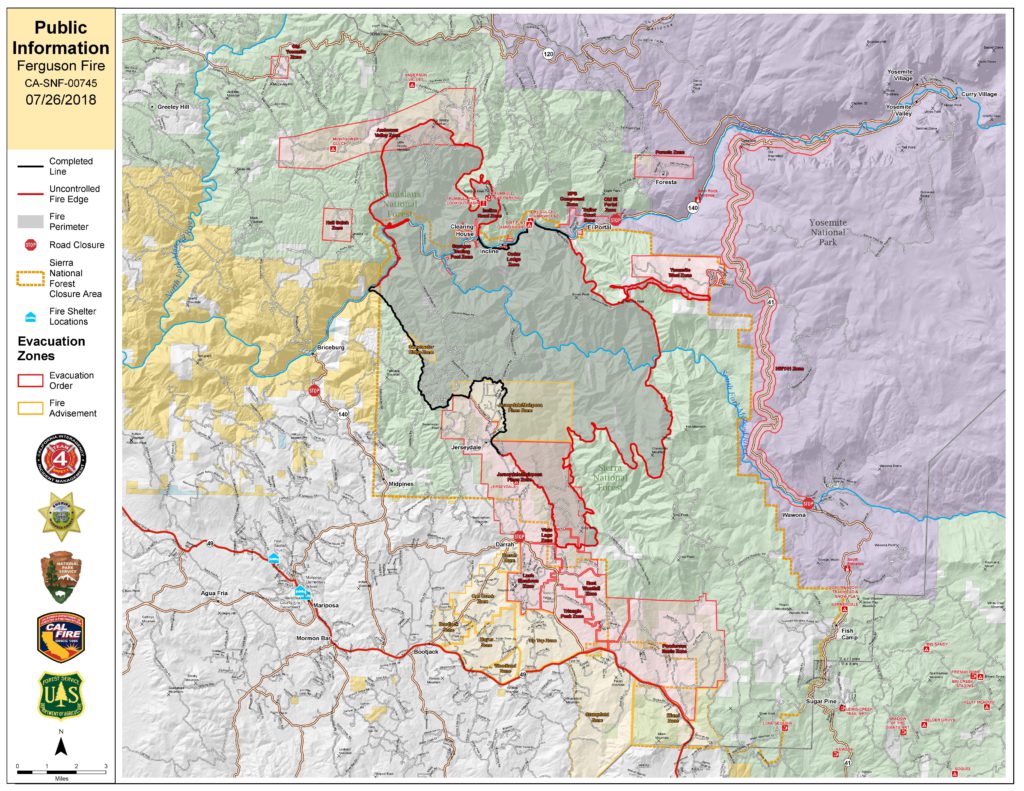